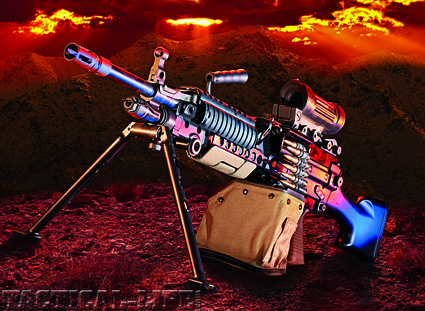 In March of 2001, the USSOCOM approved the Mission Need Statement for the MK-48 lightweight machine gun. At that time US Army SOCOM elements were using M60E4 and MK-43 MOD 0. This was a brave new weapon, and their action was about to make a big impact on the rest of the Army years later.  In September 2001, the Army Rangers started to use the MK-48 in a dismounted role, while keeping their M240B on the vehicles. And again the signs were evident that this new weapon was moving into larger units within the Army.

It took many years, and testing for the new weapon to finally become available to the rest of the Army. But it was a wait that everyone was willing to execute because of the increased freedom during mission planning, and ability of gunners to engage targets at longer range with less weight the weapon carried.

Missions
The military is changing their focus towards Afghanistan, as the draw down in Iraq continues, the thought process of when and how to fight is ever more apparent. Anyone who has taken the time to study a map can easily see that Afghanistan has a very large portion of its country filled with mountainous terrain. To be able to retain the capabilities within the squad/platoon level, soldiers are required to maintain the weapons they use. This means to humping large, heavy weapons like the M240B machine gun up thousands of feet throughout missions. But like all conflicts and wars, new technology comes about to help the lowest ground pounder.

Along comes a machine gun that everyone so greatly wishes to get their hands on that allows for better mobility and mission duration. The MK-48 started to see fielding to non-SOCOM elements prior to the winter of 2009. The exact numbers and what units got them is not important, what is that important is that they were fielded in force with the proper training to see a major difference in mission outcome within days.

With much feedback and great engineering, the personnel at FNH USA gave the choice of what to fire and pack by making the weapon system customizable, more so than what most companies do. Like most weapons, the choice on what to use and issue is greatly affected by what caliber it uses. This has been the norm for many years, and a big component of what is bought and fielded. But now with increased technology, companies are designing their weapons to be changed with minimum effort from one bullet type/size to another. This applies to the MK-48 just as much as the FNH USA SCAR, or the Magpul/Bushmaster ACR. This is simply done by a switch with the parts that are already on hand from the M249 SAW. 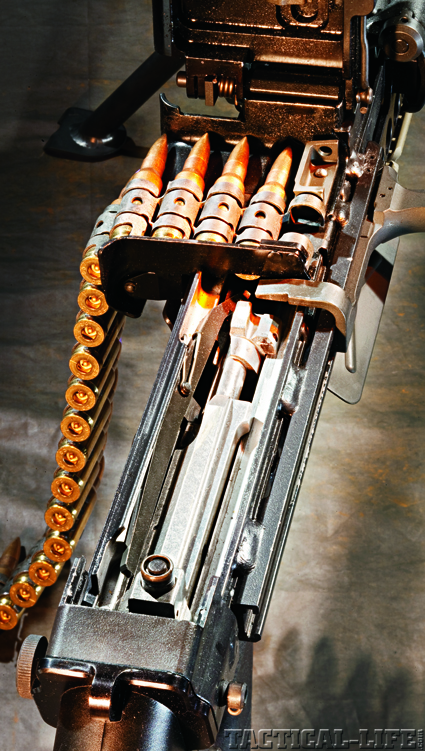 As units field the MK-48, they already have two SAW’s on hand per squad.  Therefore, if elements know their mission will be taking them in areas of increased engagement ranges, they can leave the SAW’s and take the MK-48. If they wish to use the 7.62mm, they leave the weapon set up as is. But if 7.62mm is short on hand, and/or missions require 5.56mm, all they have to do is change three parts. These three parts come from the SAW, and only take seconds to change out. All they have to do is swap the barrel, swap the bolt in the bolt carrier and change the feed tray cover. Everything else inside the weapon remains the same, and all the control and functions also are not affected in any way. With this in mind, unit leaders can tailor missions and what type of maneuvering they conduct with the carried weapon.

Gun Details
The MK-48 is based on the same size and dimensions of the M249 SAW. There is no need for retraining of fundamentals, or functions of the weapon. The only training required is based on safety aspects like the redesign of certain parts, and how to make the changes from one caliber to another. The safety aspect training is conducted in areas informing the soldiers why some parts were redesigned to increase life of the weapon and reliability of it. Simple changes over years of gathering information of the M249 helped FNH USA better understand what happens to that weapon over years of war and multiple deployments in one of the harshest environments on the planet.

CNN Video: A peace meeting in Kabul is attacked by the Taliban.

In March of 2001, the USSOCOM approved the Mission Need Statement for the MK-48…