Despite its looks, this is no ordinary AK variant. The M+M Industries M10X International Defense Rifle uses design features from successful post-World War II rifles. Then, it combines them to deliver a high level of accuracy from the 7.62x39mm cartridge. It also maintains durability and reliability in a modern, easily adaptable modular form. 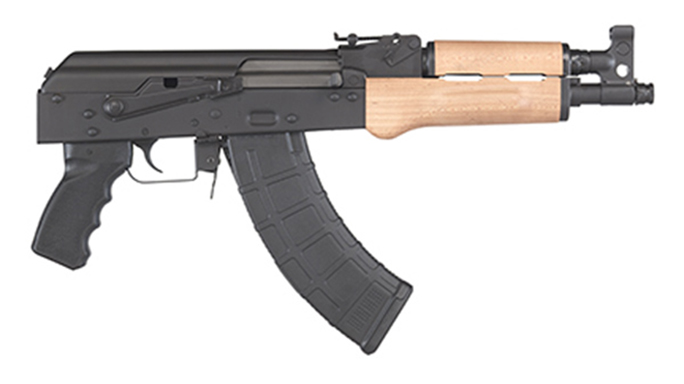 Similar but Different to Previous Rifles

When I got into it, I found it most similar to the Swiss STGW 90 (SIG SG 550). Starting with its AK-style bolt, then continuing with a combined gas piston and bolt return spring, free floated gas tube with integral regulator, and the use of a milled steel receiver. It may come as no surprise then that the rifle’s designer is a Swiss immigrant. However, the M10X is not a copy of the STGW 90 or anything else for that matter. In addition, the STGW 90 didn’t originate all the characteristics it shares with the M10X either.

Let’s look specifically at the design antecedents of the M10X. I see the AKM long-stroke gas piston operating system and aspects of its sheet metal lower receiver. This includes the trigger and hammer, magazine and magazine mounting system. In the barreled action, I see the FAL’s minimalist and rugged machined steel receiver. This stands alone from the pistol grip/fire control group and the top cover. The M10X’s barrel screws on with threads, like the FAL and other Western rifles. Conversely, AK barrels attach via the “press and pin” method. In the M10X’s field stripping procedure, I see the AR-15’s hinged lower receiver. This allows for easy removal of the bolt and cleaning from the breech end.

There’s also a lot new and innovative in the M10X aside from its unique blend of established design features. Among the most notable are aggressive simplification to reduce production costs and increase reliability. Along with planned modularity to permit easy future adaptation. Plus, upgrading of the rifle’s self-contained barreled action and operating system in the manner you would a bolt-action rifle.

The M10X has only 52 parts compared to the typical AK’s 80 parts and the typical AR’s 95 parts. Yet, the M10X has features that most AK and AR platforms don’t. For example: ambidextrous safety, a removable charging handle that installs without tools, an adjustable gas system, and a rigid, monolithic combination action-cover/handguard. The handguard is ideal for optics.

The M10X’s extruded aluminum monolithic upper is really a shell for the actual receiver within. It has picatinny rail along the full length of the top. The rail features six rows of M-Lok slots for ventilation and mounting accessories. Additionally, QD sling swivel attachment holes are on either side and there’s an integral hand stop on the bottom. This makes the M10X as versatile in terms of accessory mounting as a quality AR. However, it includes the added inherent sturdiness of a Lewis Machine Tool monolithic upper receiver. The M10X’s entire steel barreled action and operation system slides snuggly into this aluminum upper and is secured at the lower front of the receiver with one set screw.

What looks like a sheet metal AKM lower receiver, which also attaches to the lower front of the steel receiver on the barreled action that is the core of this rifle, is made from tough stainless steel and thicker-than-a-typical AKM receiver (1.5 mm vs. 1 mm). Immediately noticeable here is the lack of rivets. Instead, the lower components are attached with Torx head screws. Two advantages come from this. If you have loose fitting magazines, the screws allow adjustment of the magazine catch position to tighten the fit, and, the rear trunnion can be changed out easily to suit your preferred buttstock configuration.

The rear trunnion itself is a fairly complex piece of machined aluminum that houses the take-down button for opening up the action and a nested rubber buffer pad to cushion the recoiling force of the bolt carrier. Unlike a standard AK, which beats its rear trunnion mercilessly with steel-on-steel impact every time you take a shot, the M10X system isn’t subject to wear and tear as long as the rubber cushion is serviceable.

The design of the upper and lower receiver components around a core, barreled action/operation system, gives the M+M Industries M10X potential to be modified in countless ways outside the usual changes in barrel length. Agency “X” might want a super lightweight polymer lower. Foreign military customer “Y” might want a full-length front handguard without a hand-stop so they can mount a bipod far forward and use the rifle in a DSR role. Police department “Z” might want at different rear trunnion installed on the lower to use a standard AR-style, six-position buttstock. M+M designed the M10X to be adaptable as a major selling point. At present, the rifle is only available with one receiver/handguard/lower configuration, but new options for it are probably as close as the first major military or law enforcement contract for it.

The aluminum on the M10X is mil-spec hardcoat III anodized. Most of the steel surfaces on the M10X, including the barrel, are nitride treated. The bolt carrier and bolt are slimmer and lighter than those of the typical AK. There is no recoil guide or spring behind the bolt because, like the STGW 90, the recoil spring is mounted on the gas piston rod. This really simplifies field stripping because you don’t have to compress any springs. If there is a flaw in this system, it is that the spring would seem more susceptible to loss of temper from the heat transfer of prolonged firing. Based on internal testing, M+M advises the spring to be replaced every 5,000 to 7,000 rounds. Those springs cost a few bucks, so a lifetime supply won’t set you back much.

On my test outing to the 300-yard upper facilities at the Knob Creek Gun Range in West Point, Kentucky, I was impressed with the M10x’s very un-AK-like accuracy and light recoil. The muzzle is threaded for 5/8×24 accessories and comes with a very effective muzzle-brake/flash-hider mounted. The rubber buffer in the rear trunnion and the geometry of the adjustable length-of-pull of the Magpul Zhukov folding stock probably helped with recoil mitigation too.

Any standard AK trigger will fit the M+M Industries M10X, but M+M used an excellent trigger of their own manufacture, which is hard to improve upon. It’s a two-stage trigger with the usual AK slide before let-off, but the pull is quite light. This trigger will not hold the gun back from its full accuracy potential much, if at all.

For optics, I installed a Browe Combat Optic (BCO-005) 4×32 scope. This is the most advanced version of the tough Trijicon combat optic familiar to many US military personnel. Brian Browe founded the company in 2009 after years as the Director of Operations for Trijicon. With 22 years of experience in tactical optics, he took the old Trijicon scope to a whole new level of excellence. In addition to being just about as indestructible as an optic can be, I chose the BCO because it has a self-adjusting illuminated reticle and is available calibrated for 7.62 x 39mm. The scope automatically meters the light coming off the target, not the ambient light where you are standing, and adjusts the intensity of the illuminated reticle automatically. You can also manually select from 10 daytime intensity levels and three night-vision levels as suits the mission.

My average five-shot groups fired from the bench at 100-yard bullseye targets with the BCO 4x optic averaged 1.98 inches with Hornady Black loaded with their 123-grain SST bullet, 3.5 inches for Geco Target’s 124 grain FMJ and 4.0 inches for Wolf Performance steel cased 123-grain FMJ loads. I’m sure a 9X magnification scope would have tightened those groups up an inch. All loads functioned flawlessly and loaded and ejected smoothly. The rifle comes with an ExTech Tactical MAG 47, stainless steel re-enforced feed lip, polymer magazine, which is the best polymer magazine for the AK I’ve found. It’s like a US Palm magazine, but better because the floorplate is removable for cleaning. The rifle comes with a pair of QD sling swivels and a pair of M-Lok rail sections, too.

My time with the M+M Industries M10X convinced me that it made the AK-47 officially obsolete. No matter how you look at it, the AK is a legacy system, and there’s only so much anyone can do to upgrade its basic design. I give M+M a lot of credit for recognizing that, taking a step back and re-imagining what a modern battle rifle could be. Because of its 7.62 x 39mm caliber, I wouldn’t be surprised to see this rifle get attention in regions that were once within the sphere of Soviet influence and still inclined toward this caliber. But I suspect if it is adopted by a significant power, it will be a chambered in a more modern caliber. For more information, visit mm-industries.com.

This article is from the March/April 2022 edition of Tactical Life, now available!