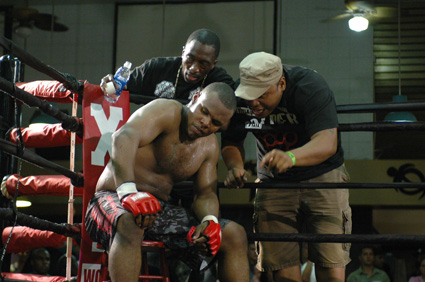 Sixteen Soldiers and one seaman were paired against local MMA fighters in 16 amateur matches and one professional match during the historic “Scuffle on Schofield.”

Out of the 17 total matches, the military team fought to approximately six wins, including the main event in which Sgt. Michael Winkelspecht, a chemical, biological, radiological and nuclear specialist with the 71st Chemical Company, 45th Sustainment Brigade, won by technical knock-out in the third round against Tillis Sionesini.

“I bring whatever I have to the table and just go out there and fight,” said Winkelspecht. “Going into the fight, I had some background on the guy, and I figured he was really good toe-to-toe, and he was. He hit me a few times and it hurt, so I figured I would take him to the ground because that is where most of my experience comes from.”

All of the military participants had some fighting experience, whether it was boxing or jujitsu, but for some, it was their first MMA match ever, said Winkelspecht, who has 10 years wrestling experience and one year MMA.

“After we found out about the fight, we trained for a solid two or two-and-a-half months preparing. Monday through Friday we go to the gym and train with each other,” said Winkelspecht.

The fighters were hand selected through various fight schools and clubs by X-1 World Events, a Hawaii-based fighting organization and event promoter. All fighters were prepared and trained to participate in the event.

“I was pumped before the fight. I was so pumped I couldn’t even pull my shirt off; it got caught on my gloves,” said Winkelspecht, with a laugh.

Not only was the fight the first MMA event hosted at the Tropics, but it also was the first time any military installation on island would allow it, said Danny Padeken, operations manager for X-1 World Events.

Matthew Enoch, recreation center program manager for the Tropics, decided to organize the MMA event in response to popular demand, and not only did it turn out to be a great crowd pleaser, but a revenue builder as well, he said.

“The crowd consisted of 500 people, and the tickets were almost split down the middle between community members and Soldiers,” said Enoch. “I think it turned out to be a really good community relations effort because we don’t have a lot of recreation opportunities for the local population on post. I thought that everyone appreciated the event.”

After putting on a successful event, Enoch and Padeken are discussing organizing another MMA event at a larger venue.

“Fighting is pride here. It was such a big morale boost for all the Soldiers, especially for Schofield,” said Winkelspecht. “(MMA) is such a big sport … the event brought the community and the military together under the same roof to enjoy a sport that we like,” he added.