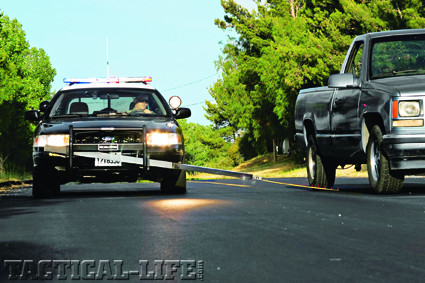 After an officer pulls alongside a suspect’s car, he activates a hydraulic chamber to send a spike strip in front of the rear tire of the fleeing vehicle. The officer then hits the brakes, and the suspect drives over the strip and punctures his tire.

About 20 years ago, Michael Moormeier of Longview, WA, grew increasingly frustrated while watching a Discovery Channel program that detailed the dangers and high costs of high-speed chases on California’s roadways.

“There’s got to be a better way,” Moormeier thought while watching police coordinate helicopter surveillances, rolling roadblocks, stationary roadblocks and long-distance chases at speeds exceeding 90 to 100 mph. Stopping determined suspects exposes officers to extreme risks, whether it’s chasing the suspects on busy roads, rolling out spike strips from the roadside, or closing at high speeds and executing the tricky PIT (Pursuit Immobilization Technique). The PIT maneuver requires officers to race alongside the suspect’s vehicle, bump it to turn it sideways, and cause the driver to lose control and stop. Unfortunately, all too often the police vehicle also spins and crashes, injuring the officers.

After watching the Discovery program, Moormeier couldn’t forget the risky, rudimentary methods police were forced to employ, especially for such a common challenge. In the United States alone, studies suggest about 600 police officers, suspects and innocent bystanders die annually in 100,000 high-speed chases. And the costs are huge. One study analyzing car chases from 1998 through 2003 put the combined losses at $3 billion nationwide during the six-year period.

“The sad thing is, the tactics and technology they’re using haven’t changed in 40 years,” Moormeier said. “Different people have tried different ideas to deal with it, but there’s a big difference between solving problems on paper and making it work tactically on the streets. The more I studied their tactics and equipment, and consulted a friend in law-enforcement, the more I thought, ‘I can do better than that.’”

Building Better Rat Traps
Five years ago, Moormeier conceived a safer, more reliable device to disable fleeing vehicles. He dubbed his invention the MobileSpike, and it resembles a standard push-bumper and mounts to the patrol vehicle’s front end. This is no ordinary push-bumper, however. Mounted inside the device are two 11-foot spike strips, one that deploys left and one that deploys right, allowing officers to disable a suspect’s vehicle from either side. To activate the spike strip, the officer flips a switch inside the vehicle. 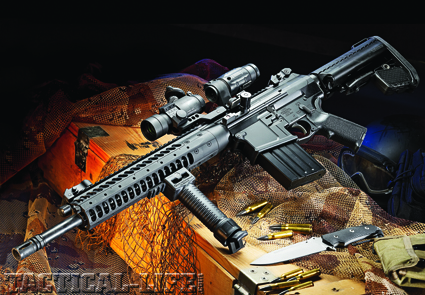 After an officer pulls alongside a suspect’s car, he activates a hydraulic chamber to…