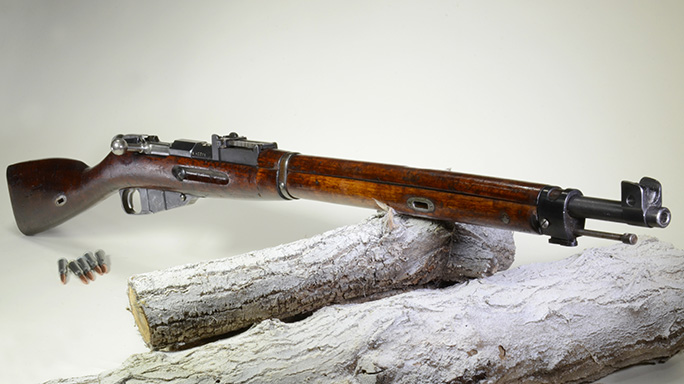 1 of 6
Winter War Fighter: The Mosin-Nagant M/28-30
The Finnish M/28-30 in 7.62x53R was a highly durable bolt-action sniper rifle made with a high-quality barrel and a stock made of Arctic birch, which was not susceptible to warping in the extreme cold. 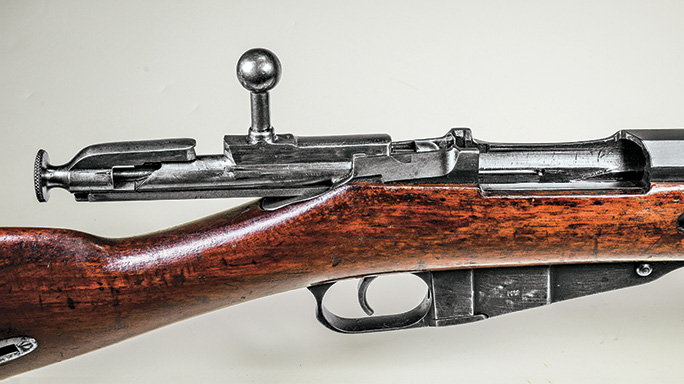 2 of 6
Winter War Fighter: The Mosin-Nagant M/28-30
The M/28-30 rifle’s safety was at the rear of the bolt. To activate it, shooters had to rotate it once the bolt was closed. 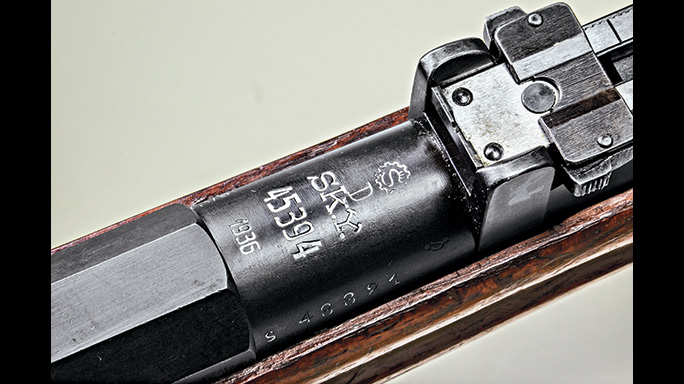 3 of 6
Winter War Fighter: The Mosin-Nagant M/28-30
The rifles were stamped on top, between the action and rear sight. This model was made in 1936. 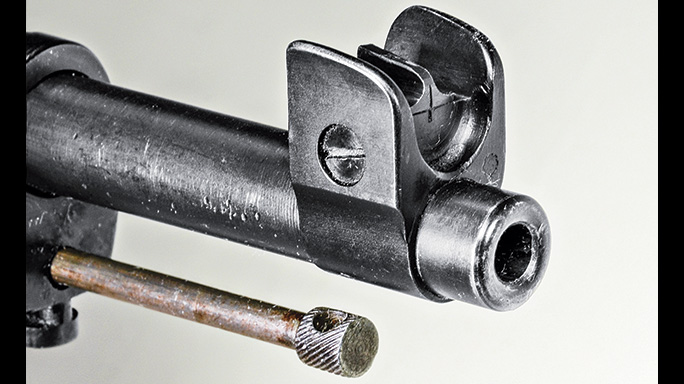 4 of 6
Winter War Fighter: The Mosin-Nagant M/28-30
The front sights were nicknamed “Spitz dog ears” because of their protective wings. Also note the cleaning rod under the barrel. 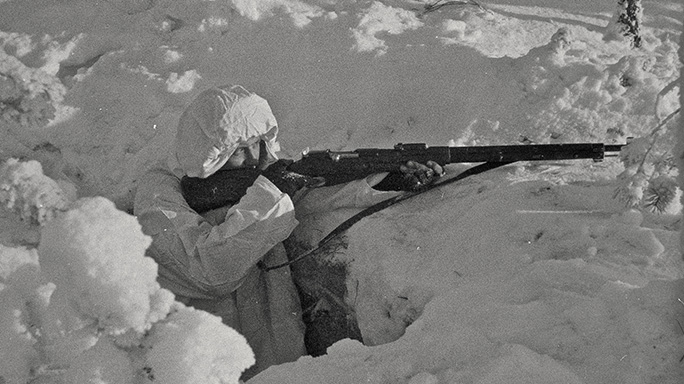 5 of 6
Winter War Fighter: The Mosin-Nagant M/28-30
With their white winter camouflage and accurate Mosin-Nagant rifles, this photo illustrates why the Russians considered the Finns “white death.” 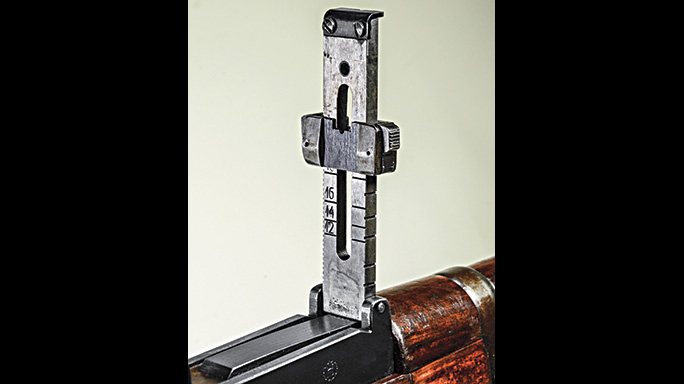 6 of 6
Winter War Fighter: The Mosin-Nagant M/28-30
Flipped up and ready to use, the ladder-style rear sight of the M/28-30 was known to be accurate throughout its range of adjustments. 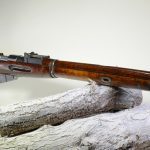 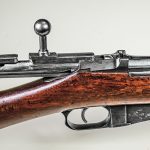 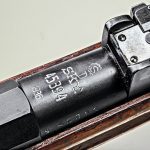 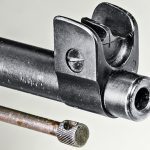 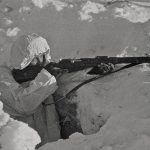 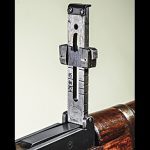 During the Winter War of 1939/1940, Finland heroically fought the forces of the Soviet Union in a David-versus-Goliath struggle that lasted about 100 days. Though the Finns eventually lost about 11 percent of their territory to the Soviet Union, they inflicted 323,000 casualties on the Soviets while suffering only 70,000 casualties themselves. Of course, for a small country that was a lot of casualties. As a result of Finland’s tenacity and courage during the Winter War, the reputation of the Finns around the world was enhanced, while the Soviet’s poor performance in combat may have contributed to Hitler’s decision to invade the Soviet Union less than a year and a half later.

Finland’s greatest asset during the Winter War was a large cadre of citizen soldiers who combined their skills as skiers, woodsmen and riflemen to ambush and carry out hit-and-run attacks on the Soviets. The principal weapons for the Finnish raiders were the Suomi submachine gun and the Finnish versions of the Mosin-Nagant rifle, chambered for the Finnish 7.62x53R round, which is virtually identical to the Russian 7.62x54R round used in their version of the Mosin-Nagant.

Originally, Finland had a large number of Soviet Mosin-Nagant M/91 rifles, which were in military arms depots when they achieved their independence from Russia in December 1917. Within a few years, however, the Finns would begin producing Mosin-Nagant rifles at SAKO, Tikka and Valmet, three arms producers that remain famous today for high-quality rifles.

The first large-scale upgrade of Finnish Mosin-Nagant rifles was the M/24 rifle for the Finnish Civil Guard. The Finnish Civil Guard (the Suojeluskunta) fulfilled a function similar to the U.S. National Guard. It was composed of volunteers, many of whom were outdoorsmen, hunters and shooters. They were separate from the Finnish Army, which was composed primarily of conscripts. Civil Guard members trained frequently and realistically. So much stress was put on marksmanship that the Civil Guard actually owned the Sako gun works. Most who have studied the Winter War believe that the Civil Guard was the most important element early in the conflict to slow the Russian advance. Their M/24 rifles used German barrels from Venus Arms, or barrels purchased from SIG in Switzerland. These rifles are often referred to as the “Lotta Rifle” after Lotta Svard, the women’s auxiliary of the Civil Guard, which helped raise the money for the rifle upgrades.

Next, the Finns reworked the M1891 Mosin-Nagant by retaining the receiver and magazine, but using a shorter, heavier barrel, improved sights, an improved bolt and new barrel bands, among other changes. After problems arose with the stock breaking when using the bayonet, the stocks were also modified. An interesting point is that many Finn soldiers didn’t like the bayonet, but preferred to use their traditional puukko knives for close combat. The current bayonet for the Valmet M/76 rifle is actually a knife bayonet of traditional style. A shortened cavalry version, the M/27rv, was also produced in limited numbers. Very similar to the M/27 was the M/28, which had a different barrel band and improved trigger. Initially, M/28 barrels were purchased from SIG, but later they were produced by Tikka and SAKO. All of the rifles, however, were assembled at SAKO. The major criticism of the M/28 was that it retained the Russian “Konovalov” rear sight, which Finnish troops did not like. This is one of the primary reasons for the development of the M/28-30.

The M/28-30 is generally considered the best of the Finnish Mosin-Nagants and the rifle focused on in this article. Known for its accuracy, the M/28-30 had an improved rear sight, a front sight adjustable for windage, a coiled trigger spring to minimize pre-travel, and magazines designed to prevent jamming due to the rimmed cartridges interlocking. The new front sight retained the protective ears used on the M/28, which resulted in Finnish troops referring to them as “Pystykorva” rifles; this translates as “Spitz dog ears” as they thought the ears resembled those of the Spitz dogs, which were popular in Finland. This front sight did not require a special tool for adjustment as it used standard screws. Another aid to accuracy was the addition of an aluminum sleeve in the forend of the handguard to act as a heat shield. This sleeve also made contact between barrel and stock more consistent and eliminated some of the adverse affects on the rifle’s harmonics. Basically, it enhanced the performance for greater accuracy.By the time production of the M/28-30 rifles began, Finland was producing its own quality steel for barrels from the Lokomo steel works. Stocks were of Arctic birch, which was not susceptible to warping in the extreme cold encountered during the Finnish winter. The first M/28-30 rifles incorporating new materials and improvements came off the SAKO assembly line in April 1934.

Prior to the Winter War, the M/28-30 was a popular competition rifle with the Civil Guard, and it was also used by famed Finnish sniper Simo Hayha, without a scope, for many of his 505 confirmed kills during the Winter War. However, the M/28-30 was used as the basis for a Civil Guard sniping rifle, the M/33, which mounted the German Bush Visar 4.5x Dr. Zf104 scope. The Civil Guard developed a special curved stripper clip that bent around the scope to allow rapid magazine loading. The M/28-30 was deemed accurate enough that 440 of them were manufactured by SAKO for use in the 1937 World Shooting Championships in Helsinki, in which the Finns won the most medals. The last pre-World War II competition was held in Lucerne (with a couple of events held in Germany) and was won by Germany. After World War II, however, the Finns once again proved their marksmanship, winning the 1948 competition in Buenos Aires. Note that traditionally the service rifle of the host country was used for these competitions. Some of the specially selected M/28-30 rifles, which were not used in the actual World Shooting Championships, were later awarded to members of the Civil Guard as shooting prizes and saw action in the Winter War. Unlike many military rifles at that time, the rear sight of the M/28-30 was known to be accurate throughout its range of adjustments.

There were other Finnish versions of the Mosin-Nagant produced prior to World War II, most notably the M/39, which was similar to the M/28-30, though with a pistol grip stock. The Finnish Army had chosen not to adopt the M/28-30 used by the Civil Guard as they felt it was too heavy and that its sights were too complicated. Although it may seem a minor point, some Finnish soldiers found the change in the M/39’s rear sight, which incorporated the battle sight setting of 150 meters as opposed to 200 meters originally used on the M/28-30, an aid to precision shooting at closer ranges. Very few M/39s were produced before the end of the Winter War, but 96,800 were produced and used during the Continuation War, in which the Finns continued to fight the Soviet Union as allies of the Germans between June 1941 and September 1944. M/39 rifles had a reputation for accuracy, reportedly being required to place three out of five shots into 33mm (about 1.3 inches) at 100 meters to be accepted. Adapting to the soldier’s likes, the bayonet for the M/39 was shorter and of puukko style.

During 1943 and 1944, a model designated the M/30 was produced using barrels and parts from weapons captured during the Winter War or from rifles captured by the Germans on the Eastern Front. The Finns continued to re-manufacture Mosin-Nagant rifles into the 1980s; some actions were even used as the basis for the 7.62 Tkiv 85 sniping rifle used by Finnish Defense Forces from the mid-1980s on.

It was the M/28-30 rifle, however, that was the most popular front-line weapon during the Winter War and the Continuation War, though estimates put production between 1934 and 1941 at only about 40,000, far less than the later M/39. This figure is misleading, however, as it denotes the number of rifles produced as M/28-30s. Actually, a large number of earlier M/28 rifles had also been upgraded to M/28-30 specs. Other earlier versions of M1891 Mosin-Nagant served as well, as Finland attempted to equip as many troops as possible. Although the M/28-30 rifle was highly prized for its accuracy among the members of the Civil Guard, for whom it had been designed, many examples ended up in use by the Finnish Army, a separate fighting force during the Winter War. Although the rifle’s accuracy was appreciated, the Army found that it had a tighter chamber, which made it more difficult to fire captured Soviet 7.62x54R ammunition in it. Also, the standard round used by the Finnish Army was the D166 service cartridge, while the M/28-30 had been designed for best accuracy with the lighter D46 and D47 rounds. Still, the M/28-30 served well during the Winter War and Continuation War, though almost half were declared unserviceable by 1951, when only about 22,100 of them remained serviceable.

The sling mounting points are not swivels but channels in the stock through which the sling strap may be passed. Although this method limits the manner in which the rifle may be carried slung, it makes a lot of sense for the Civil Guard’s mission in launching stealthy attacks amid the Finnish forests, as this method is much quieter than the use of sling swivels. The safety was also hard to apply. It requires pulling the knob at the rear of the bolt back while rotating it to move the safety into position at the left of the receiver. But I would speculate that most Finnish Civil Guards carried the rifles empty and chambered a round when needed, though with practice they probably achieved some facility with the safety.

As time has passed, appreciation for the M/28-30 has grown in Finland and elsewhere, and the rifle is now a sought-after collectible. 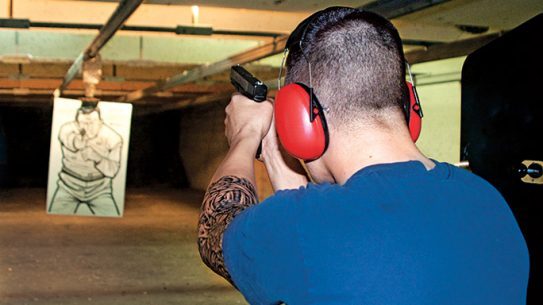