by Jorge Amselle
in Guns, Shotguns
0

5
SHARES
220
VIEWS
Share on FacebookShare on Twitter
Intimidating and ready for duty, the sleek Mossberg 500 Thunder Ranch shotgun has all the bells and whistles of a close-quarters powerhouse. Here it’s equipped with a SureFire X300 weapon light.

To say that the Mossberg 500 shotgun is a classic would be a bit of an understatement. It is one of the most popular shotguns ever made and has been in continuous production since the early 1960s, with millions manufactured. A 12-gauge Model 500 was the second gun I ever owned, and the first one I bought for myself and learned to shoot trap and skeet with it.

But the Mossberg 500 is good for far more than just busting clay birds. It has proven to be an outstanding personal/home protection gun and has seen widespread use in both law enforcement and the military in various configurations. The Mossberg 590 can be found in current use with various branches of the U.S. military and the 590A1 is reportedly the only pump-action shotgun to satisfy the Mil-Spec 3443 requirements, which include an endurance test of 3,000 rounds of buckshot. 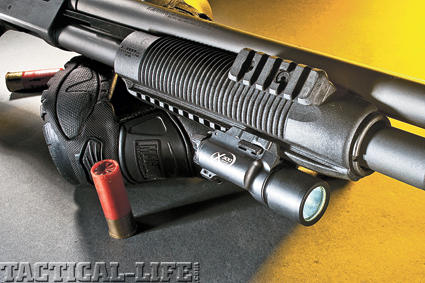 A tough polymer handguard on the shotgun provides standard Picatinny accessory rails at the 3, 6 and 9 o’clock positions.

Now Mossberg has teamed up with renowned firearms trainer Clint Smith to offer their new Thunder Ranch tactical shotgun. It was only natural that Smith should team up with Mossberg, which has its own storied firearms manufacturing history. In fact, it is the largest manufacturer of pump-action shotguns in the world, and it’s the oldest family-owned gun maker in America, founded in 1919. 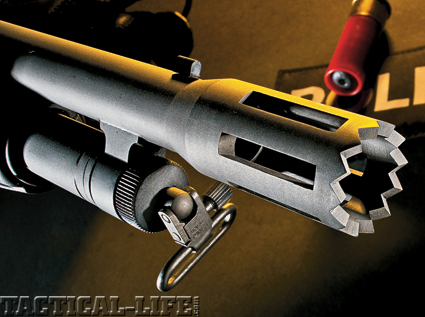 Equipped with an aggressive standoff muzzle device, the 500 is ready for breaching duties with the right ammunition.