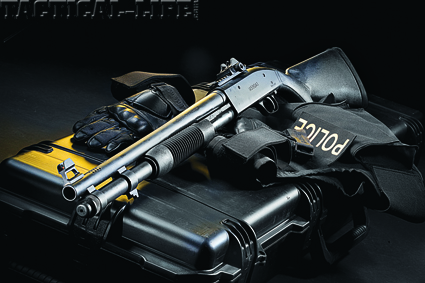 When it comes to advancements in shotgun technology, Mossberg leads the charge with their new 590A1 SPX, soldifying the platform’s relevance in law enforcement applications.

There is a popular notion within law enforcement that the pump shotgun is obsolete and ought to be replaced by some sort of self-loading rifle. Without question, a rifle brings any number of advantages to the table, but I would stop short of relegating the shotgun to the scrap heap.

For over 100 years, the pump action shotgun has provided exemplary service, from Belleau Wood to the mean streets right here at home. It remains a formidable tool and at typical combat distance, boasting stopping potential beyond any handgun. Hit probability is far greater as well, and when the chips are down, the shotgun remains the “go to” tool to level the playing field.

Some critics have opined that the shotgun has seen its day, and that there haven’t been any significant improvements to the system in over 50 years. That is certainly not the case and the current crop of combat shotguns is far superior to what was available a few short years ago. Leading the charge is O.F. Mossberg & Sons, Inc., a manufacturer of a complete line of shotguns suited for military, law enforcement and personal defense applications.

The shotgun that best exemplifies Mossberg’s commitment to the military and law enforcement market is their 590. Best described as a beefed-up Mossberg 500, the 590 was a variant developed after the 500 proved its mettle by meeting the U.S. Armed Forces’ rigorous Mil-Spec 3443E Standard. Shotguns were required to digest 3,000 rounds of full power buckshot with less than a 0.1% malfunction rate. When the smoke cleared, only the Mossberg was able to make the grade.

Besides military service, the 590 is in wide use with various law enforcement agencies, including the Burbank Police Department and New York City Police Department. A number of variants are available with different barrel lengths, stocks, sighting systems and finishes, which further broadens its appeal.
Recently, Mossberg introduced the 590A1 SPX, a 12 gauge pump loaded with desirable features. After running up a little trigger time on this newest version, I’ve come to the conclusion it has far more to offer than most other smoothbores used for self-defense. 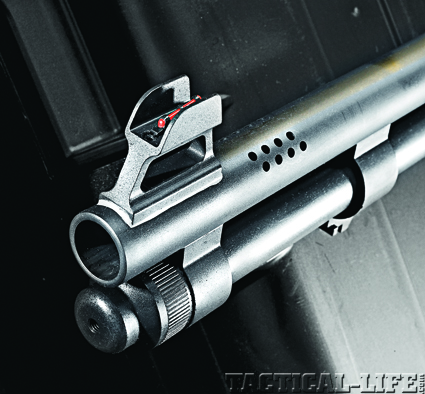 The SPX’s fiber optic front sight, protected by wings, is quick to pick up in most lighting conditions.

Like all the Mossberg 590A1 shotguns, the new SPX is engineered from the ground up for superior durability. A heavy-walled 20-inch barrel is mated to an aluminum alloy receiver and metal surfaces are given a black parkerized finish. The barrel is ported to diminish muzzle rise; a nice touch when firing heavy loads. Both the triggerguard and safety button are made of metal.

When it comes to advancements in shotgun technology, Mossberg leads the charge with their…