by Matt Berger
in Guns, Shotguns
0

The shotgun has been a mainstay of LE for well over a century. In the earliest of days, it was a weapon that gave lawmen the upper hand in cases where drovers and other travelers would be armed only with pistols. Even in the days of the birdshot these early guns employed, the spreading pattern of shot was quite deadly at close ranges. Back then guns were limited to a two-shot capacity. The design of these weapons naturally progressed throughout the years to lever actions, pump, and eventually, semi-automatics. 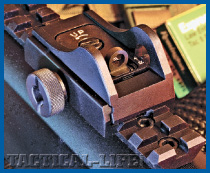 A number of firearms instructors and other pundits declare that the shotgun is obsolete. They have concluded that the tactical rifle has supplanted the shotgun due to its compact size, high capacity and the potential for surgical accuracy. While it’s difficult to find fault with this logic, there are a number arguments to be made in favor of the shotgun.

First, a shotgun is an extremely versatile weapon given the array of different loads it’s capable of firing including 00 Buck, slugs, sabots, incendiary rounds and less-lethal projectiles. Next, at close ranges, while a rifle certainly doesn’t lack potency, a shotgun blasting 9 to 15 pellets of spreading 00 Buck is devastating on a level unlike any other weapon.

Lastly, many agencies’ policies prevent officers from carrying rifles. For these officers, a shotgun doesn’t exactly leave them poorly armed. The shotgun can be pressed into service and fired like a rifle with the use of slugs, delivering impressive accuracy and hard-hitting stopping power by a skilled shooter. While effective range for slugs may be 125 yards at the outer envelope, few police shootings will occur at longer ranges, especially in urban environments.

Gun Details
Cognizant that some lawmen still want and need shotguns in today’s era, Mossberg has modernized their tactical line, the apex of which is their 930 Special Purpose shotgun. The 930 SPX (Special Purpose with extended magazine tube) comprises an autoloader with a black synthetic stock and forend, an 18.5-inch cylinder-bore barrel, ghost ring sights, and an integral Picatinny rail atop the receiver.

The 930 SPX receiver is made of forged aluminum alloy for high strength and reduced weight with a matte black finish. The rear sight is an LPA ghost ring, and the factory-installed Picatinny rail allows for quick attachment of a vast array of optics to augment the sights. Mossberg’s familiar thumb safety allows for ambidextrous operation.

The barrel and bolt are machined from extrusions of steel in 12-inch lengths, cut to the proper dimensions and machined to their final respective forms. Fixed into a sight tower atop the barrel is a wing-protected fiber optic front sight. Underneath the barrel resides a 7-round capacity extended magazine tube.

The gun was developed for use with 12 gauge, 2¾-inch chamber, and factory loaded shells, driven by a simple, reliable, easy to maintain gas system. A black synthetic stock offers a traditional look. A recoil pad is mounted on the buttstock.

A sling on a tactical shotgun is an absolute must, and a weapon-mounted light isn’t far behind. Any of you who are working cops know that after the threat has been dealt with, we often have to go “hands on” with a suspect. Worse yet, when the gun is no longer appropriate, sometimes the confrontation degenerates into a physical fight. Should these situations present themselves, (and they will) if you don’t have a sling to secure the long gun, you’re going to be in trouble in a jiffy.

Back when I started on the job, there were fewer options for mounting a light on a long gun, and to compound the problem, most of us used department-issued scatterguns. Consequently, using the shotgun in low light usually amounted to holding a foot-and-a-half long, heavy flashlight alongside the forend with the weak hand. It was a daunting task.

Finding a sling was the easy part. I ordered one of BlackHawk’s shotgun shell slings. Constructed of heavy ballistic nylon, the BlackHawk sling is fully adjustable, attaches by way of heavy steel spring hooks, and holds 15 shells.

Next came mounting it. While the 930 SPX had a mounting point under the rear of the stock, there was none up front. I learned that while Mossberg was working toward a solution for this model, they currently had no forward mounting hardware. A call to L&M Mounts was in order. They have been in the business of long gun mounting solutions for tactical lights and lasers for years. They had both a Double Ring mount that attached to the magazine tube and the light, and a 3-Rail Shotgun mount with Picatinny rails: one below and one on each side.

The Picatinny mount was more interesting since we could then use it to mount a light and the sling. The mount slid onto the magazine tube and was secured via a hex-head set screw.

A powerful 80 lumen 3-watt Luxeon LED weapon light from Insight Technology was selected along with a recently discontinued SSL-1 (now replaced by an improved version going by the designation WX150). Both instantly snapped onto the L&M Picatinny. We mounted the light on the side rail, the left side of the tube, which allowed manipulation of the paddle switches on the tail cap of the light with the support-hand thumb.

A call to Brownells led us to a Midwest Industries’ MCTAR 06 sling adaptor, which we attached to the bottom rail of our L&M mount. The MCTAR 06 is styled like the Mil-Spec AR15/M16 forward sling mount. This was an easy and effective attachment point for our BlackHawk sling. Now, we were in business.

Shooting Impressions
The day we had an opportunity to make it to the range for our tests was partly cloudy and about 65 degrees, almost perfect for shooting, however, we suffered from 25 to 30 mph wind gusts. Fortunately, these blasts of air were mostly at our backs, but the reader should still make some allowance for the effects upon accuracy.

We first fired some single shots of 00 Buckshot at 7 yards, simply to see how the gun would pattern with the loads. Most impressive with this test was Federal’s Power Shok 00 Buckshot, which punched a pattern in the paper substantially smaller than the size of my fist. After being followed by four more rounds, the pattern still was barely larger, at 3 inches. We tried this test also with five rounds of Remington’s 8-pellet Tac-8 00 Buck, and wound up with a pattern of 8.25 inches. Five rounds of Winchester’s Ranger load in 00 Buck rendered a 5.25-inch pattern.

Moving back to 15 yards, we repeated the five-shot tests, resulting in an 8.25-inch pattern from the Federal, 10.38 inches from the Remington, and 13.63 inches from the Winchester.

Our reserve of ammo on this occasion didn’t include slugs from Remington, but we did have 1-ounce loads from Federal and Winchester, which we tested by firing five-round groups from 50 yards. The Federal Tactical gave a group of 7 inches (which would have been about 2.5 inches smaller had the author not thrown a flier) while the Winchester Ranger shot a 7.31-inch pattern. All testing was done from a freestanding position.

We noted early on in our shooting with the 00 Buckshot that the gun seemed to be impacting high and to the right. Fortunately, the elevation and windage-adjustable rear sight made for easy correction.

The gun handled and pointed well, and recoil was noticeably less than any pump shotgun. The checkering on the black synthetic forend and pistol grip afforded the shooter a good, sure grasp. Either thumb can easily operate Mossberg’s safety, mounted at the top-rear of the receiver. The charging handle of the bolt is slick in its action, and I reached over the top of the receiver to operate it with my left/non-dominant hand, because I prefer to keep a master grip on the weapon with my gun hand at all times. I did the same with the bolt release, which is located under the ejection port. This presented no real difficulty, though it might to some shooters.

After accuracy testing, we set up steel pepper-poppers and hammered at them with 1-ounce slugs from 20 yards, then moved in to 15 yards to fire at them with 00 Buckshot. The ghost ring rear and optic fiber front sights were conducive to quickly attaining a sight picture while moving from one target to the next, and the pepper-popper drills were easily the most fun of our testing.

The Mossberg ran smooth as silk, with no malfunctions of any load tried. The only problem we encountered was that the rounds were difficult to push into the magazine tube if one round was “combat-loaded” in the chamber first. This would only become a factor if one were to select a slug, for instance, and chamber it before loading other rounds behind it. Otherwise, with the bolt forward, the rounds tended to load smoothly into the magazine tube.

Final Notes
The Mossberg 930 SPX was a pleasure to shoot and handle. It demonstrated good accuracy, superb reliability, simple operation, and shouldered and pointed quite naturally. Its appearance is quite subdued in all black, and all business. The sights are quick and effective, and have the additional advantage of easy adjustment. We found the gun to be robust and reliable, familiar and easy to operate, fairly light for a tactical shotgun of this kind, and priced to sell.