by Doug Larson
in Guns, Shotguns
0

Using a variety of slugs and buckshot, the Mossberg 930 SPX ran flawlessly at the range. Its stock design and semi-auto action helped reduce some of the felt recoil.

Mossberg, a well-known maker of fighting shotguns—many in use by law enforcement and the U.S. military—has introduced a new variation of its 930 gas-operated, semi-automatic 12 gauge, the 930 SPX Pistol Grip with a special camouflage finish provided by Kryptek. 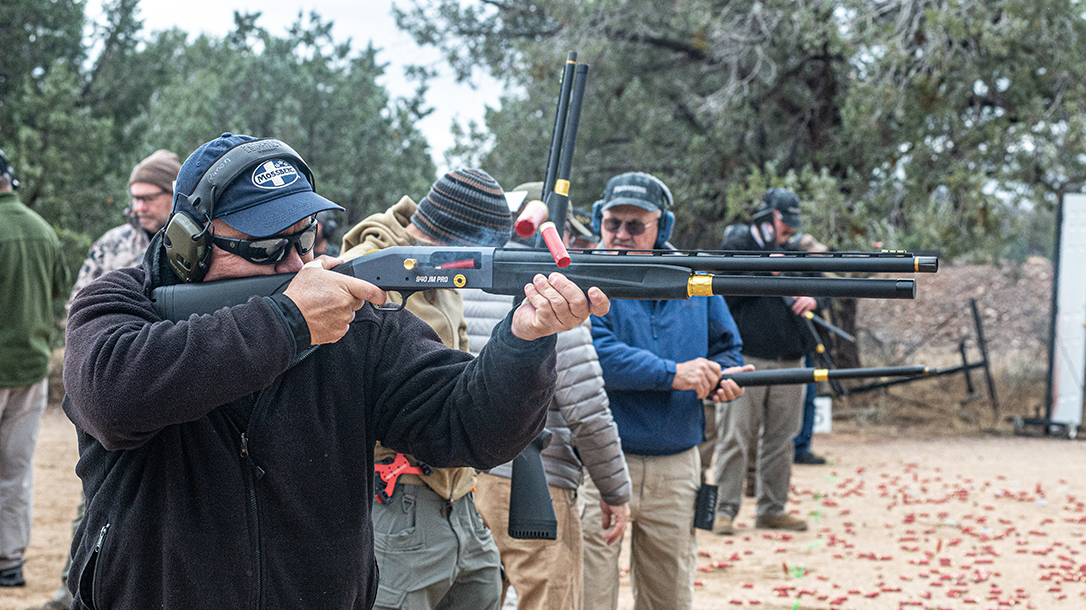 Kryptek calls the pattern “Typhon,” and it has a distinct look that reminds one of reptilian scales. The design, along with the coloring, tends to confuse the eye, which is exactly the desired effect. The Typhon version of Kryptek’s camouflage has a grey hue that the company indicates is designed for working in low-light environments. The finish is evenly applied to all outside surfaces of the gun except the recoil pad, trigger, receiver rail and rear sight. It has a slight sheen instead of the commonly found flat, non-reflective camouflage finish. However, it appears to be very durable and corrosion resistant.

A shotgun is a formidable weapon, but one of the most often heard concerns about using a shotgun is the heavy recoil. While a 12-gauge shotgun is never going to be as soft shooting as a .22, this one has some features that really help to make it easier on the shooter. In fact, repeated shooting in tests using slugs and buckshot did not leave me with any soreness in the shoulder. Others, however, may have a different reaction because perceived recoil is a very subjective thing and varies from shooter to shooter.

Helping to reduce felt recoil is the gas operating system. If you had a gas-operated, semi-automatic shotgun with a gas cutoff so that the gun could be operated as a single-shot or autoloader, the recoil generated would be the same in either mode. However, the recoil would feel softer to most shooters if the gun was operating in semi-automatic mode. It has to do with the movement of the action and the duration of the recoil pulse, but the bottom line is that semi-autos seem to feel like they kick less. Also helping to reduce the effects of recoil is the thick Choate buttpad.

The buttstock has a built-in pistol grip with a fairly large circumference, finger grooves on the frontstrap and checkered side panels. The trigger reach put the first pad of my trigger finger in just the right position, and I do not have long fingers. For those with bigger hands, it should also work just fine. The trigger had a slight amount of take-up, a bit of creep before breaking at about 5 pounds and a little overtravel. In drills, the Mossberg 930 SPX shotgun worked just fine.

The aluminum receiver is topped by an accessory rail to which is mounted a windage- and elevation-adjustable ghost ring rear sight with protective ears. The base of the sight and the ears are made of polymer, but the hardware and ring itself are steel. Up front, there is a red fiber-optic element on a steel tower that also has protective ears. With the receiver accessory rail, it would be easy to mount a red-dot or reflex sight of some type—not a bad idea on a fighting shotgun.

The safety is a slide located at the top rear of the receiver. Pushing it forward allows the gun to be fired, and back is the “safe” position. While this location is very good on a shotgun with a traditional stock, it is not the best place for one with a pistol grip because, to manipulate it, the firing hand must be removed from the grip. However, it still works. It just requires training and practice to manipulate.

An easily gripped charging handle on a semi-automatic self-defense shotgun is very important. The one on this gun is large and knurled. Finding it and cycling the gun by hand is simple. Just below it is the bolt release button that, when pushed, releases the bolt to run forward into battery. The 930 is also equipped with a shiny silver button that serves as a cocking indicator. When it protrudes from the front of the triggerguard towards the trigger, it can be felt and seen, indicating that the gun is cocked.

Slings are essential on a long gun used for serious work, because setting the gun down is the same as disarming. But there are times when both hands are needed for some other task. So, Mossberg installed a sling swivel stud on the bottom of the polymer forend and the bottom of the buttstock.

The forend is nicely contoured and checkered to provide a slip-resistant surface. Beneath the forend is the magazine tube with an extension; it allows the gun to hold seven 2.75-inch or six 3-inch shells. The extension stops just short of the end of the 18.5-inch, steel barrel. As is common on shorter-barreled self-defense shotguns, there is no choke.

Operating the Mossberg 930 SPX is simple. After putting the gun on “safe” and pointing it in a safe direction, pull the charging handle to the rear, locking the bolt open. Then place a shell on top of the elevator and push the bolt release; this allows the elevator to lift the shell into alignment with the chamber. It also permits the bolt to move forward under spring pressure, chambering the round. The magazine tube is then loaded from the bottom of the receiver and is done by pushing the elevator up with the shell and then continuing to push the shell into the tube.

To unload the gun, it is put on “safe” with the muzzle pointed in a safe direction. Next, turn the gun over so that the loading port on the bottom of the receiver is up. Then push the shell elevator in while pressing the bolt release. Doing so releases one shell at a time. Repeat until the magazine is empty. Then turn the gun over so that the triggerguard is down, all the time making sure the gun is still pointed in a safe direction. Pull the bolt to the rear with the charging handle to eject the round in the chamber. Finally, look and feel to make sure the chamber and magazine are empty.

To disassemble the gun for cleaning, check to make sure it is not loaded. Check it again and put the safety on. Lock the action open by pulling the charging handle to the rear, then unscrew the magazine extension and remove it. Be careful because the magazine spring will want to fly away; you must control it so it won’t damage anyone or anything. Once you remove the extension, you can slide the forearm off, after which the barrel can be pulled forward and separated from the receiver. At this point, the forearm retainer, return spring, pusher assembly, spacer tube, gas piston and seal ring can be removed.

Next, pull the charging handle straight out from the bolt. Then slide the bolt and its carrier out from the front of the receiver. The bolt can then be separated from the carrier and the link removed by pushing the link pin out. If necessary, the trigger group can be removed by driving out the two trigger housing assembly pins.

Putting it all back together is, as they say, done in reverse order. The best advice though is to follow the directions in the manual.

I didn’t experience any malfunctions while test-firing the Mossberg 930 SPX with a variety of buckshot, slug and birdshot loads. But, I’ve found that patterning of buckshot loads varies widely. I tested the shotgun with several buckshot loads, including those from Federal, Nobel, Remington and Winchester, as well as slugs. It performed very well.

Contrary to what many uninformed people think, the shotgun, whether using birdshot or buckshot, is not an area gun that can be pointed in the general direction of a threat and be expected to hit the target. Shot patterns are not that big. Yet, as a responsible person, the shooter doesn’t want stray pellets hitting something or someone that doesn’t need to be. So, patterning the defense load at varying distances to determine its size is vital.

In other words, test your personal gun and your load of choice but the 930 SPX ran very well. I’d feel safe with this shotgun in my home-defense arsenal. For more information, visit mossberg.com or call 800-363-3555.