0
SHARES
196
VIEWS
Share on FacebookShare on Twitter
The MMR Tactical’s upper and lower receivers are made with great attention to detail and fit together tightly for accuracy.

Overwhelmed by “new” AR-15s? I know what you mean. After all, what could possibly be gained by another gun built on a 50-year-old platform? That said, I don’t look at what is being done to the gun—I look more at who is putting it
together. Admittedly, when I heard Mossberg was jumping into AR production, I was enthused. I wrote my first Mossberg article in 1993 on a newly introduced Model 500 with ghost ring sights. The gun was so good that I bought it. We shot this gun recently and it still runs like a sewing machine because it was built with Mossberg quality.

I have seen hundreds of Mossberg shotguns over the years, trained many people in their use, and they possess a well-deserved reputation for robust quality. This is why I was enthused about a Mossberg AR-15 and knew that it would likely be a great option for the LE officer looking for a reasonably priced, high-quality patrol carbine.

Gun Details
Jokes abound regarding the AR-15 being “Barbie for men,” a direct stab at all the accessories available for the platform. Admittedly, some of these add-ons are unnecessary and some are quite useful, and Mossberg seems to have a good understanding of the two. My version of the Mossberg MMR (which stands for “Mossberg Modern Rifle”) came without fixed sights, which I prefer because I usually replace factory sights with models of my own liking. All Mossberg MMRs are direct gas impingement systems for reliable, smooth operation. The current trend is to build ARs with gas piston operating systems, but there are theoretically problems with this. Broken operating rods, tilting bolt assemblies and broken bolts have been reported with some piston systems. At the same time, the direct gas impingement system is proven, with a half-century of time (in combat) and effort being put into perfecting it. 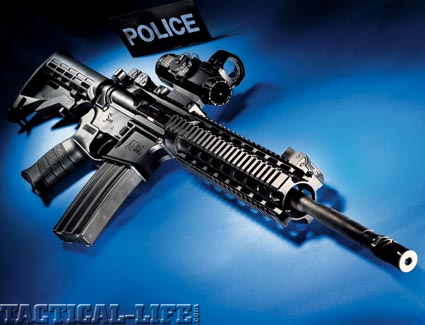 An aluminum Picatinny quad-rail forend with vents for maximum cooling is mounted around a free-floating, 16.25-inch, button-rifled barrel with a 1-in-9-inch rate of twist. This design increases accuracy and is the preferred barrel system by many LE and military operators. Debate abounds over what is the proper rate of twist for the AR, but I believe that is dependent on your real world of work. Both 1-in-7-inch- and 1-in-8-inch-twist barrels are becoming increasingly popular as they stabilize the heavier 69-plus grain bullets that are becoming the gold standard for 5.56mm ammunition. But how many of us are going to need an AR for 500-yard shots, especially in law enforcement? I recently spoke with the head firearms instructor of a large West Coast police department that has employed carbines in patrol cars for over a decade. They have had a substantial number of shootings using their carbines, and he related to me that their average engagement distance has been just over 20 yards. This seems to be the trend for police agencies nationwide, so a 1-in-9-inch twist rate seems to be a reasonable choice. 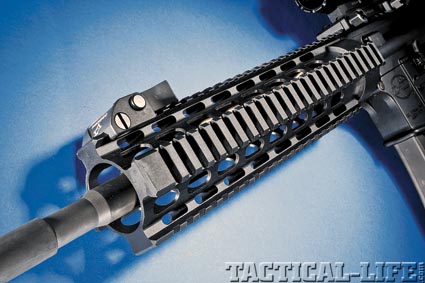 The 16.24-inch-long, free-floating barrel is surrounded by a quad-rail forend for mounting accessories as the mission dictates.

The end of the free-floating, M4-contoured barrel is capped with an A2-style muzzle brake, and the entire gun is finished with a durable black phosphate/anodized finish. The Stark SE-1 Grip looks unique and offers a positive grip. It keeps the trigger finger in straight alignment with the trigger.

Considering the importance of trigger control, this grip is an important addition to the gun—one I really liked. Another nice feature is the oversized charging handle, which makes for quick, ambidextrous engagement. This is one of the first things I add to my personal ARs, so I was very happy to see this accessory. Rounding out the gun is a 30-round, mil-spec metal magazine and a six-position, collapsible, M4-style stock.

The integral Picatinny top rail makes it easy to mount optics. Like many who are getting older, my eyes are not what they once were, so I am particular regarding the sights I put on my guns. Though I am a big fan of optics, I just can’t fathom any combat firearm without a set of back-up iron sights (BUIS) in case the optic fails. Diamondhead sights make targeting so easy it’s like cheating. All you need to do is place the diamond around the front sight post inside the diamond-shaped rear peep sight and you have perfect alignment—it is really that simple. I have tried placing colored front sight posts in the front, but it really doesn’t help that much. The diamond-in-a-diamond alignment does everything you need.

For an optic, I went with Leupold’s new HAMR sight with a DeltaPoint mini red dot mounted on top. The Mark 4 High Accuracy Multi-Range (HAMR) riflescope is a fixed-power 4x24mm sight built for precise mid-range marksmanship and fast target acquisitions. Features include the ballistically matched illuminated CM-R2 reticle, a fast-focus eyepiece and Leupold’s advanced Xtended Twilight Lens System. Leupold’s DeltaPoint reflex sight can be attached to the HAMR, providing close-quarters capability. The CM-R2 reticle is designed to work with the most popular tactical rounds and is an etched-glass reticle, clearly visible with the illumination activated or in the “off” mode. By combining the ranging ability of Leupold’s Special Purpose Reticle (SPR) with the quick acquisition of the Leupold Circle Dot reticle, the CM-R2 provides the flexibility necessary on the battlefield or on the street. The CM-R2 maintains the instinctive fire capabilities of the Circle Dot for short-range, low-magnification needs of CQB situations or law enforcement operations. 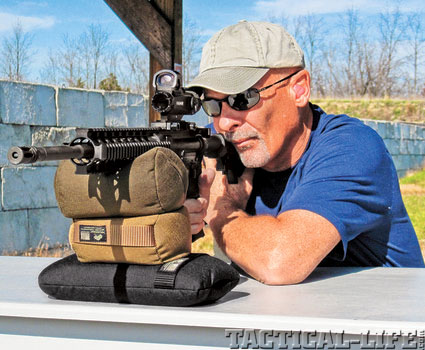 The proof of a weapon’s utility comes on the range, so I headed out with a large variety of ammo styles to see just how well the Mossberg MMR would run. I began by shooting various ammo styles through the gun to see if it would choke. I shot 100 rounds that I randomly loaded as fast as I could to see what would happen. No effort was made to achieve accuracy—just shooting the gun as fast as I could press the trigger. There were no stoppages or malfunctions, so I moved on to accuracy testing. I zeroed the MMR at 100 yards with Federal American Eagle 55-grain FMJ rounds. Then I fired five rounds of various ammo styles and weights out to 100 yards, measuring the groups at their widest point. At the same time, I used my Shooting Chrony chronograph, placed 10 feet from the muzzle, to record how fast each round was traveling. 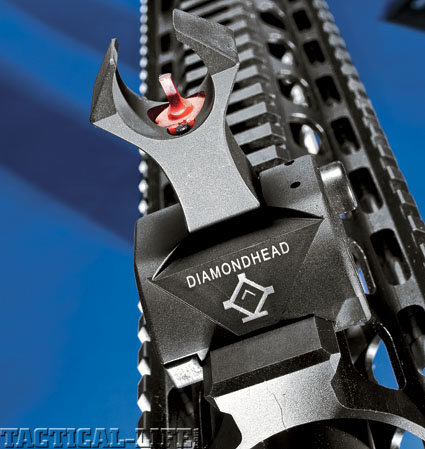 The Diamondhead front sight is well protected by the outer diamond “wings,” which also help the shooter’s eye focus faster.

The general rule of thumb: A 16-inch AR carbine should shoot at least a 2-inch group or less at 100 yards, and I think that is a reasonable standard. This would be a pretty tight group under the stress of a conflict, so anything less than 2 inches should be viewed as a bonus. All of the loads tested shot within this 2-inch standard, with the Black Hills Special Operations 77-grain MatchKing hollow point producing a sub-MOA group. Not to be outdone, the Hornady 75-grain TAP load came in right at MOA, and the Federal and Remington loads also performed quite well.

A Green Beret friend who returned from Afghanistan gave me the box of Black Hills ammo. He told me, “Forget all the BS you might hear about the 5.56mm. It works just fine if you use it within reasonable distances”—which he said was 500 meters. While the heavier loads work quite well in 1-in-9-inch-twist barrels at 100 yards, some claim this accuracy will “fall apart” the farther the round travels. Again, this is a matter of your real world of work, so use a load that performs well for your intended purpose and likely environment.

I completed my testing with a number of my favorite drills. I especially like a modified version of the El Presidente fired at 25 yards, completed with a turn and reload. I shoot this on 8-inch squares and maintain the 10-second par time. Needless to say, it’s very challenging. Then I performed snap-shooting drills at 10, 15, 20 and 25 yards using both the HAMR and Delta-Point. Truth be told, I found the HAMR worked just fine at close range. By keeping both eyes open (the way you should shoot with these types of AR optics), all I needed to do was flash the circle/dot reticle on target and press the trigger—my eyes did the rest. That said, do what works best for you.

All told, the Mossberg MMR Tactical proved to be just as reliable as their line of shotguns. These carbines are well appointed with just the features you need to set up your version of a patrol carbine. For the LE officer looking for a patrol carbine that offers good power, range and performance—and all at a reasonable price—the Mossberg MMR Tactical should warrant a very close look. For more information, visit mossberg.com or call 203-230-5300. For more on Leupold, visit leupold.com or call 800-538-7653.