In 2011, Mossberg modified its popular 4×4 rifles to take detachable AR-style magazines. The new guns, rebranded as the Mossberg Varmint Predator (MVP) series, were an immediate success. Users found the rifles to be rugged, handy and accurate, and many were sold as ranch or truck guns. But the guns also appealed to the needs of law enforcement, and Mossberg offered Scout and Patrol models with synthetic stocks and 16.5-inch barrels sporting muzzle brakes. In 2015, Mossberg added another gun to the MVP lineup when the company introduced the MVP-LC (Light Chassis).

Utilizing a modular aluminum chassis and the proven MVP action, Mossberg has created a long-range, precision rifle with the MVP-LC. Offered in both 5.56mm NATO and 7.62mm NATO, these rifles have found favor with those wanting to try their hand at long-distance competitions as well as police departments looking for an economical solution to the need for countersniper rifles. I received a sample rifle in 7.62mm NATO for testing.

The rifle has an 18.5-inch barrel and utilizes a detachable box magazine. My gun came with a 10-round Magpul PMAG, though it can also use 20- and 25-round magazines. DPMS LR-308 and Knight’s Armament SR-25 magazines of any capacity will also work with the MVP-LC. And Mossberg offers the rifle on its own or part of a package with a Vortex 4-16x44mm Viper HS-T scope, a nice piece of glass and a perfect match for the MVP-LC, as well as a Caldwell bipod. This is the package I received for my evaluation.

In its brief history, the MVP action has accrued a reputation for its rugged reliability. It cocks upon opening and uses a push-feed system. Mossberg engineers adapted the bolt for use with staggered-column magazines by adding two projections at the bottom of the bolt that strip rounds from either side of the magazine. The bolt has a fluted body and an oversized and weighty bolt knob for quick, sure manipulations. It has twin locking lugs and an ejector on its bolt face. The striker serves as a cocking indicator, and the silver piece is flush with the rear of the bolt body when cocked. Once the gun is fired, this component moves forward about 0.19 inches.

The barreled action is attached to the aluminum Light Sniper Systems (LSS) chassis, made by Modular Driven Technologies (MDT), with two screws. Machined from a billet of 6061-T6 aluminum, this chassis has a V-shaped bed and allows the barrel to float freely for maximum accuracy. It can accommodate barrels up to 1 inch in diameter and is threaded at its rear to accept an AR-style receiver extension (buffer tube), which offers a multitude of choices for the shooter. In the case of the MVP-LC, a Magpul CTR stock that can be adjusted to six different length-of-pull positions over 3.5 total inches is used. The chassis also accepts AR-style pistol grips, and Mossberg chose the Magpul MOE+ for the MVP-LC. The AR-style magazine release is in a position forward of the trigger, on the right side of the receiver.

The safety is located in the same position as it is on a typical bolt action, at the rear of the receiver, on the right side. For a rifle with a sporting stock, this is a convenient location that makes it easy to access the safety with the thumb of the shooting hand. But with the MDT LSS chassis, the pistol grip precludes activating the safety while maintaining a firing grip. Unfortunately, there just is no way to reach the safety without removing your hand from the pistol grip. The bolt release is located on the left side of the receiver and only requires the user to depress it to remove the bolt for cleaning.

Mossberg equipped this MVP-LC with a medium-weight bull barrel featuring a 7.62mm NATO chamber and a 1-in-10-inch twist rate. The barrel is only 18.5 inches long, and about 6 inches of its length, just before the muzzle, is fluted. As mentioned, the barrel floats freely its entire length, and it comes capped with a SilencerCo Saker Trifecta muzzle brake. Quite a few long-range precision shooters compete with a sound suppressor in place, and this muzzle brake can be used as an adapter to add the popular Saker 762.

Any precision rifle is only as good as its trigger, and here Mossberg uses its adjustable Lightning Bolt Action (LBA) unit. It’s a two-piece trigger with a blade in its face, not unlike that of a Glock pistol. The blade must be depressed for the rifle to fire. In use, this safety toggle is nearly undetectable and should require little familiarization on the part of the shooter.

To adjust the trigger, remove the front and rear action screws and lift the barreled action from the chassis. At the front of the trigger housing is a screw that, if turned clockwise, will increase the pull weight. Mossberg ships the gun set at its lowest weight—3 pounds—but users can adjust it all the way up to 7 pounds. 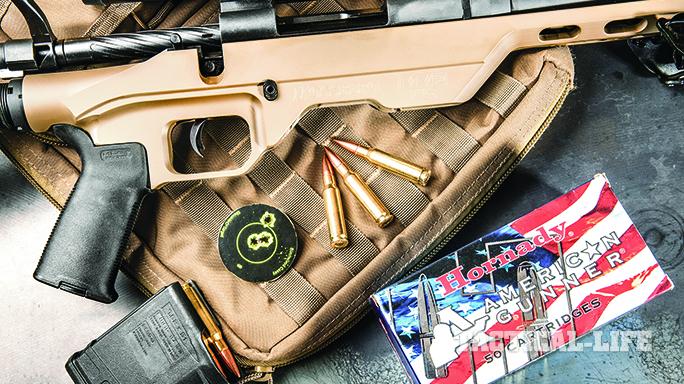 I mentioned earlier that my test rifle was equipped with a Vortex 4-16x44mm Viper HS-T scope already mounted in Vortex rings. This was my first experience with a Vortex Optics product, and I was immediately impressed with the scope’s clarity and brightness. I set up my sight-in target at 50 yards, adjusted the scope’s focus and parallax and fired a three shot group. Apparently the scope had already been bore-sighted at the factory, because I only needed to make some minute adjustments before moving my target back to 100 yards, and this was when things started to go bad.

I had removed the rifle’s bipod to rest the forend of the chassis on a Caldwell rifle rest. I was firing three-shot groups to conserve ammunition, and sometimes I’d place two shots right on top of each other with the third shot a couple inches away. While I was at the range I rechecked the scope rings and action screws to make sure they were tight. I even tried several different bullet weights and after a while it became evident that all I was doing was wasting good ammo. Frustrated, I drove home to give the rifle a good going over. While I was scrubbing the rifle’s bore, I noticed the scope shift a little. Even though the scope rings were tight and the gun was bore-sighted, the scope base had not been tightened. I removed the Viper and coated the scope base screws with thread-locker before tightening them.

My next trip to the range made me smile. There is nothing more interesting and fun than a rifle that can place rounds on top of each other. My smallest group was created with Hornady’s 155-grain American Gunner BTHP bullets. I was able to place three shots into a cluster that measured just 0.64 inches. Using this same load, my largest group was only 0.84 inches. I was also pleased to see the MVP-LC’s 1-in-10-inch-twist barrel produced sub-MOA groups with 155-, 168- and 175-grain bullets. It showed a slight preference towards the lighter projectiles, and I’m sure some judicious experimentation with different loads would produce even tighter groups. I fired all of the groups through a warm barrel without giving the gun a chance to cool.

In the midst of our summer monsoons, I drove out into the Sonoran Desert and found a place where the MVP-LC could really stretch its legs. I set up a steel target about 13 inches wide and 18 inches tall and got in my car and drove a little ways. I engaged the target first at 200 yards, and it was easy to get hits. So, I drove a little farther and repeated the process all the way out to 700 yards, where I was able to place three consecutive hits on the target. I tried to find a place at a greater distance, but the rains had caused the grass to grow so tall that I couldn’t see the target when firing from the prone position.

I’m impressed with the MVP-LC. It’s an uncomplicated rifle requiring little in the way of maintenance or special handling. It possesses the accuracy and reliability required for competition and more serious work. My criticisms of the rifle are few. I’ve already mentioned the placement of the safety and there’s not much that can be done about that—it is a malady common with any sporting action placed in a chassis.

I’d also like to see Mossberg offer the MVP-LC with a longer barrel as an option. The 18.5-inch barrel may be just too short for many interested parties, and at 16.5 inches, the 5.56mm NATO version does not fully realize the potential of that cartridge. In my opinion, Mossberg should produce this gun chambered in 6.5 Creedmoor with a 24-inch barrel. This caliber dominates in long-range precision competitions, and I think the MVP-LC platform would be a great choice for many new shooters.

With an MSRP of $1,365 on its own or $1,995 with the Vortex scope and Caldwell bipod, the Mossberg MVP-LC is an attractive package for competitors and agencies on a budget.

This article was originally published in ‘Guns & Weapons for Law Enforcement’ December/January 2017. For information on how to subscribe, please email subscriptions@outdoorgroupmags.com or call 1-800-284-5668.