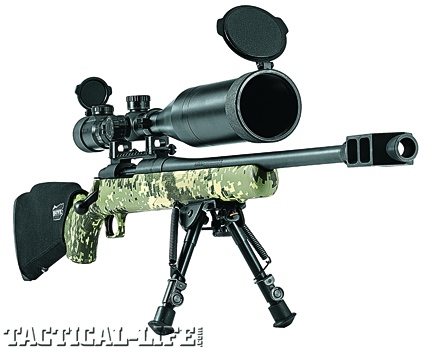 Since the dawn of time, men have tested themselves and competed against each other through contests of arms. One can only speculate where the first marksmanship competition was held and what tools were used. Was it slings at 20 paces? Or spears perhaps? When man began to chronicle his history with both the written word and drawn/painted pictures we could see that marksmanship competitions with the bow became a common test.

With the invention of the rifled barrel, firearms could be relied upon to shoot straight and consistently. Men began to test themselves and compete against each other at great distances with rifles. The skill that it takes to place a round precisely on a target at distance is both sought after and envied by others.

Today there are hundreds of precision rifles from which you can choose. Custom rifle makers turn out bolt-action guns that will put bullets consistently into ¼-MOA groups with regularity.

These meticulously crafted long guns can cost upwards of several thousand dollars. Those with an unlimited budget or spending taxpayer’s money have an easier time swallowing a three, four, or five thousand dollar price tag. What about the shooter or an officer on a budget? Is there a quality, precision rifle with the “bells and whistles” for that man? That question is the impetus for this article.

Gun Details
For several years now Mossberg has been back in the rifle business. Once content to sell only shotguns, the Connecticut gun maker have vastly expanded their inventory to include both rimfire and centerfire rifles. Their recent venture into the bolt action centerfire came in the form of the 100 ATR (All Terrain Rifle). The ATR has gone through a number of modifications and improvements during the last few years.

The Night Train II is a vastly upgraded version of the original rifle. Starting with the basics, the short action bolt has dual locking lugs. On the right rear of the action is a two-position manual safety. Like most bolt guns, the safety lever is rear for safe and forward to fire.

Taking a close look at the trigger you will see a distinctive lightning bolt cut out. This indicates Mossberg’s new LBA (Lighting Bolt Action) trigger mechanism. This new trigger design is an adjustable trigger with currently vogue built in safety/release lever. After purchasing the rifle the end user can set the trigger pull as light as 2 pounds by removing the action from the stock and using a flat-head screwdriver.

A blind magazine feeds the action and will hold 5 rounds of .308 carrtridges. The .30-barrel is 22 inches with a very unique muzzle brake on the end. Yes, it looks very similar to those found on much larger guns. This was a purposeful design. Rifling is a 1-in-10-inch twist.

Surrounding the barrel and action is a synthetic stock. The barrel is free-floated into the stock and passed the quick dollar-bill test. Two stock colors are available. The model shown here has a digital camouflage pattern akin to the US Army’s ACU design. An all black model is offered as well.

What sets the Night Train II apart from other models is the accessory package that comes with the gun. The rifle is ready for the range right out of the box. Mossberg has installed a Picatinny style rail on the action. Atop the rail they have mounted a Barska 6-24x60mm variable powered riflescope.

Under the forend the guys in Connecticut have attached a Harris Bipod. Harris bipods have set the standard for decades. Lastly, for comfort a neoprene cheekpiece

It’s doesn’t matter how many bells and whistles you install on gun if it won’t shoot. The range and/or field are where you make your money. To test out the rifle’s abilities I used both match-grade ammunition and hunting loads. Federal and Remington were represented by 168-grain match ammo. CorBon and Winchester provided the hunting loads in 130-grain DPX and 150-grain PowerMax PHP respectively.

First things first, I would fire each load over a Shooting Chrony to see what kind of velocities I could expect. No big surprises were encountered, but I did verify what kind of velocities I could expect. I learned long ago that the velocity printed on the ammo box is determined by using a generic test barrel in the factory, not an actual firearm. The match-grade ammunition produced speeds in the 2600 fps (feet per second) range, just right for precision shooting. As for the lighter weight hunting projectiles, they naturally moved out a bit faster. The CorBon load was just shy of the 3000 fps mark.

Getting down to brass tacks, I benched the rifle and zeroed it using the Federal load as a benchmark. As the barrel is relatively lightweight, I took my time allowing it to cool a bit between shots.

In a nutshell I discovered that the match-grade ammunition easily held sub-MOA groups. When the speed increased the patterns opened up a bit. The different bullet designs certainly contributed as well. 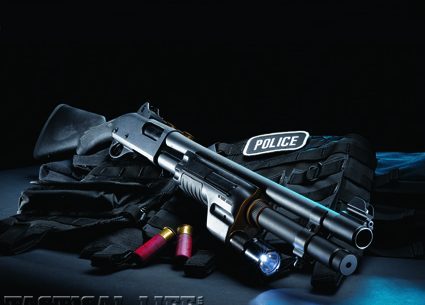 The Novak Custom Tactical 870 is a custom 12 gauge shotgun for the police...