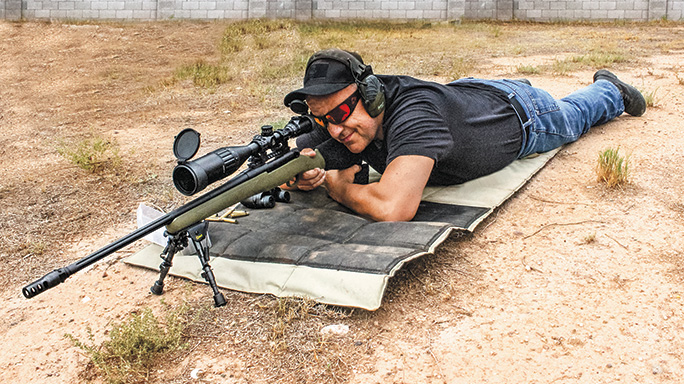 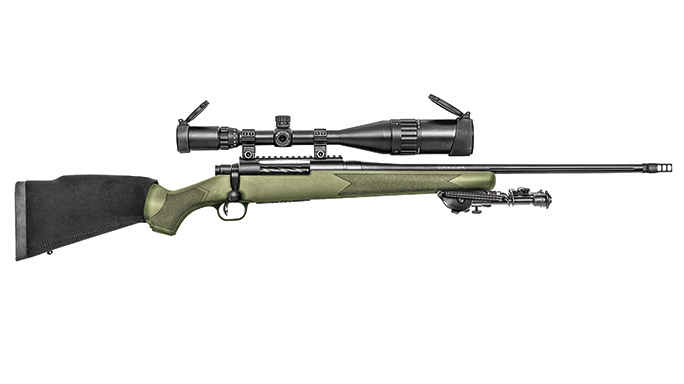 2 of 3
Patriot Night Train: Mossberg’s New Sniper Rifle
The Patriot Night Train comes with a Caldwell bipod and a UTG 6-24x50mm scope on top of its built-in features, including a synthetic stock, a smooth action and a fluted, free-floating barrel. 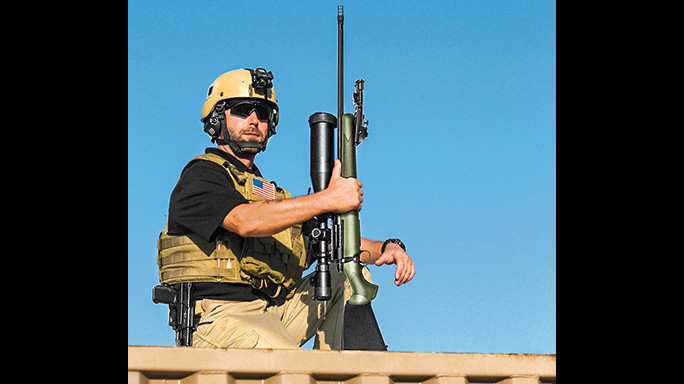 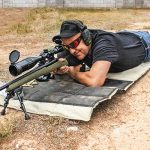 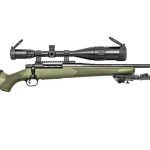 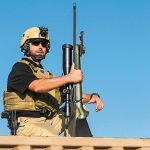 The allure is palatable. The desire to develop the skills and master the tools to hit targets at extreme distances is common in the shooting world. While training is available to those seriously interested in the craft, the equipment has been a stopping point for many. You would be hard pressed to find another shooting discipline that requires the budget connected to long-range shooting. From hand-tuned actions to barrels apparently made on some lunar colony because of their price, the bar is high. Enter the good folks at Mossberg. This stalwart of the firearms community nestled in Connecticut had an idea.

When a manufacturer hits a home run with a product, it’s easy to overlook some of the company’s other innovations. This is true even if those innovations are exceptional. This is the case with Mossberg. Known worldwide for its shotguns, the company also quietly produces exceptional precision rifles as well. The Mossberg Patriot Night Train is a well-made bolt action that provides affordable accuracy.

The Patriot Night Train is but one of Mossberg’s rifles, and it is rock solid. Offered in .308 Winchester/7.62mm NATO and .300 Winchester Magnum, the Night Train is a great platform for a variety of scenarios. The rifle has a well-made short action with dual locking lugs and a spiral-fluted bolt. The action is also outfitted with an oversized bolt knob for easier manipulations as well as a top Picatinny rail for mounting long-range optics. Out of the box, these rifles are ready for duty either on the range or in the field looking for game.

The Night Train features Mossberg’s Lightning Bolt Action (LBA) trigger, which is user-adjustable from 2 to 7 pounds. The trigger has an articulating blade that projects from the shoe. This prevents the rifle from firing unless the two are retracted in unison. Constructed for durability and reliability, the LBA trigger assembly is machined from aircraft-grade aluminum and hardcoat anodized to military specifications to resist corrosion and minimize wear. The trigger on my test rifle in 7.62mm NATO weighed just over 3 pounds; it proved to be very clean and provided a crisp break. The rifle’s two- position safety enables cycling of the bolt for unloading when in the rear or “safe” position. All of the rifle’s functions were smooth and easy to run.

The Night Train has a 22-inch, fluted barrel with a 1-in-10-inch twist rate. The barrel comes threaded for suppressor use and is topped off with a removable SilencerCo Saker Trifecta muzzle brake. This is a feature that is normally seen on more expensive rifles. While lightweight when compared to other tactical rifles, the design of the barrel and brake manages recoil very well. The fluting helps reduce weight and gives the barrel greater surface area, which in turn allows it to cool faster. While not significant in itself, the reduction in barrel weight combined with the light nature of the rest of the gun should make it easy to carry on long hunts.

All of this is seated in a synthetic stock designed to free-float the barrel. With a 13.75-inch length of pull, it is an average-sized rifle that will fit a variety of shooters. The buttstock includes a neoprene cheek-raising kit with interchangeable insert pads. This is a plus because it allows the Night Train rifle to fit a wide variety of shooters.

The rifle is also designed to support detachable box magazines, which is another feature rarely seen in “off-the-rack” rifles. The 7.62mm NATO Night Train comes with a four-round, staggered-column magazine, while .300 Winchester Magnum versions come with three-round magazines. Along with the magazine, my test rifle came with front and rear sling swivel studs, a Caldwell bipod pre-installed on the rifle and a UTG EZ Tap 6-24x50mm scope. While it’s an economical scope, it held its zero adequately for the testing performed on the range. This entire package makes the Patriot Night Train a rifle ready for use the minute it comes out of the box.

Stats and descriptions are one thing, but you’ll find out more about the rifle at the range. A day on the range is always a good day, and the weather could not have been better: 75 degrees with cloud cover and a 4-mph wind from the right. I decided to shoot the Night Train from prone using a Dillon Precision shooting mat, a sand sock and Leupold Rogue 10x25mm binoculars for spotting.

After a brief period of zeroing the rifle in, I was ready to measure its accuracy with five-shot groups. My test ammunition consisted of Federal Premium’s 168-grain Gold Medal rounds, Black Hills’ 168-grain Match BTHPs and Patriot Munitions’ 168-grain AccuFlight load. Even with a very minimal barrel break-in period, the Night Train proved to be a smooth shooter. All of the groups flirted with 1 MOA, but five rounds of the Patriot Munitions AccuFlight ammo clustered into just over 0.75 MOA.

This accuracy continued as I switched from paper to steel targets farther and farther out. I ultimately ran out of range at 800 yards, and the Night Train kept on running flawlessly. The steel target developed one central gray spot as rounds continued to strike in the same area. The light weight of the rifle made moving into different shooting positions a breeze. It was easy to set up for a shot, fire, then get up and run to the next position. The smooth action made cycling rounds a pleasure as well. I only wished the magazines could hold more rounds!

The action was smooth, and the trigger was very nice. The lack of major recoil made follow-up shots fast and easy. In hindsight, the inclusion of a suppressor would have made the shooting even more enjoyable. While the scope that came with the rifle was sufficient for general range use, the rifle is capable of much more. A high-end piece of glass would be a solid addition for this rifle.

Mossberg has accomplished what it set out to do: create a very accurate rifle for the average person with an average budget. For those who yearn to get their feet wet in the long-range world, this rifle can fit that need. Dollar for dollar, the Mossberg Patriot Night Train performs on par with rifles starting out at twice its price. Mossberg has truly hit the bullseye with the Patriot Night Train rifle. 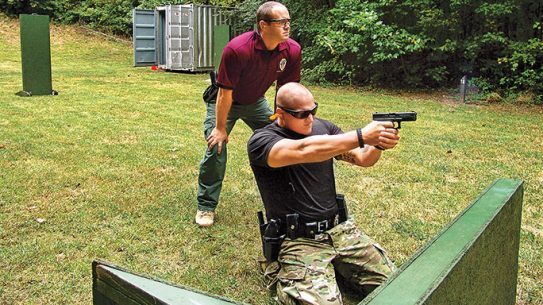 An in-depth look at the well-trained and armed Cramerton, North Carolina, Police Department.