by Caleb Giddings
in Guns, Shotguns
0

If you read our comprehensive 410 buckshot ballistic test, you’ll know that I selected the Mossberg Shockwave 410 as the platform to launch the rounds. I’ve always been fascinated by the Shockwave series and their bird’s head grip. However, the 12 gauge isn’t exactly pleasant to shoot. I’ve also been fascinated by 410 as a defensive round. 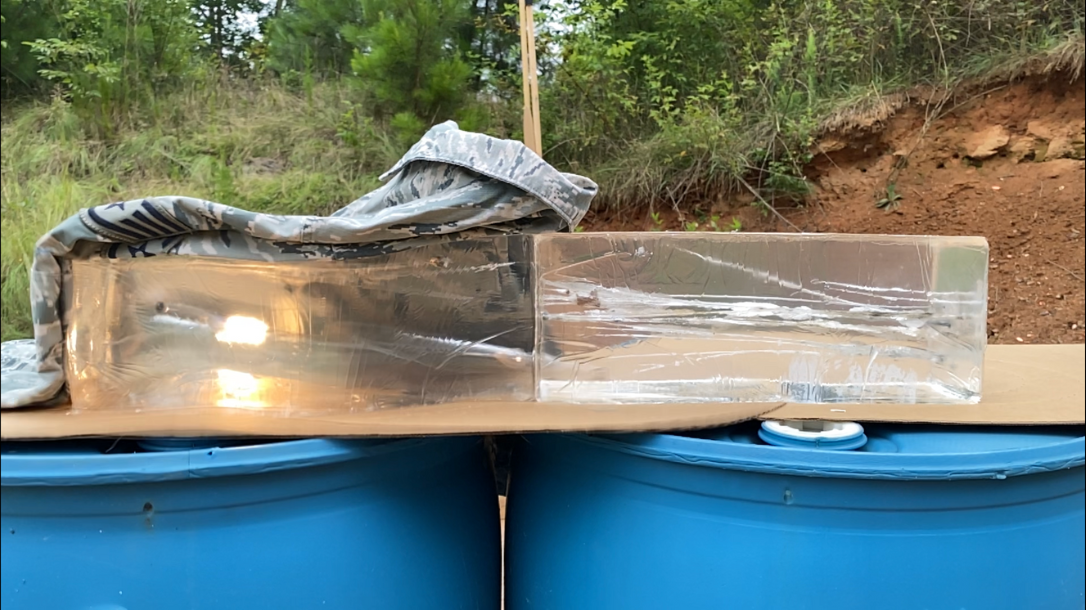 According to my scale, the Mossberg 590 Shockwave in 410 weighs in at 4 pounds 3.0 ounces. That’s pretty light. But, it makes the gun easy to handle and pack around if you’re carrying it. It has a 3-inch chamber, and the tubular magazine can hold five 2.5 inch shells or four 3-inch shells. The barrel is a simple cylinder bore. One of the features I really like about the Mossber Shockwave 410, and all Mossbergs in general is the location of the safety. On the Shockwave models it’s easy to reach and intuitive to use.

The finish is a pretty standard matte black. The pump action on the sample model runs smooth and delivers that satisfying “cha-chunk” noise we all love from a pump action shotgun. To aid in managing recoil, the pump has a nylon strap that you can use to put counter pressure on the gun. This is beneficial if you’re using a shooting technique called “stretching the gun.” Another name for this is the “push-pull” technique.

Push-Pull Technique with the Mossberg Shockwave 410

Using the push-pull technique is simple. Your dominant hand on the raptor grip or pistol grip pulls the gun towards your shoulder. Your support hand on the pump engages with the strap and pushes the gun away from you. Imagine you’re trying to stretch the gun. This technique works with all shotguns to minimize felt recoil, not just stockless shotguns like the Shockwave series. Using push-pull with the Mossberg Shockwave 410 reduced my perception of recoil considerably, especially when shooting 3-inch buckshot.

To put it simply, yes. Ballistics gel doesn’t lie, and the Remington 5 pellet 000 buckshot load penetrated almost 20 inches in gel. That’s delivering 5/8ths the payload of a Federal Flite Control 12 gauge round, but for less than 1/2 the recoil penalty. Other defensive loads performed similarly well, including the 2.5 inch buckshot shells from Winchester. I’m not saying I’d sell my Beretta 1301 or anything, but a 410 bore shotgun can certainly deliver a significant payload of buckshot.

The only real issue I discovered with the Shockwave during our test was aiming it. The bead sight was hard to pick up quickly, owing to the lack of a stock. There are some aiming methods to mitigate this. However, I feel like the Mossberg Shockwave 410 would benefit from a red dot sight or another aiming option. The receiver is drilled and tapped for an optic mount, and the screw pattern is the same as other Mossberg 590 series shotguns.

Potential Self Defense Use Cases for the Mossberg Shockwave 410 Gauge

We know that the gun shoots tight patterns out to 10 yards with common buckshot loads. That makes it viable for home defense and personal protection. You certainly could use the Shockwave with 410 buckshot as a home defense gun.

Personally, I think it would also make an excellent backpack gun/camping gun if you’re not concerned with having a fast draw. The overall length is short enough it can fit in a big backpack. With birdshot it could be used for harvesting small game at intermediate ranges. It would also work to eliminate dangerous pest animals. Loaded with buckshot, it’s perfectly capable of taking down medium game like deer, and would be a reasonable choice for larger dangerous animals like coyotes. I don’t think I’d want to rely on it in grizzly bear country, but otherwise, a solid choice.

However, I think the best place for the Mossberg Shockwave 410 is the “under the counter” gun. If you’re in a business environment and could safely stage a gun for counter-robbery work, this would be a pretty great choice for that. It’s small enough to stash in lots of places. The terminal ballistics with the right load are solid. But it doesn’t have too much recoil, so you can get follow up shots if necessary.

One note: avoid slugs from 410 loads. They’re light for the caliber, and usually very soft lead. If you want to shoot something with a .40 caliber projectile, 40 S&W and 10mm are both better choices.

Final Thoughts on the Shockwave

Lastly, the Mossberg Shockwave’s price point is right where you want it. Right around $450 is a small price to pay for a capable gun. I really like shooting the one I have. But would it be my first choice for a home defense gun? No, probably not. I have a Beretta 1301 for a reason.

But that doesn’t mean that I don’t like the Shockwave, and in 410 I especially like it. There’s something that really appeals to me about its light weight, it’s portability, and how easy it is to shoot. Maybe it’s because I imagine strapping one to my back Mad Max style and blasting zombies with it? Hard to say. But what I can say for sure is that I like it.