A shotgun refresher class, or an afternoon spent brushing up on shotgun skills quickly reminds me of 12 gauge buckshot’s or slug’s impressive firepower. With all the handgun ammo advances, nothing those puny sidearms deliver makes a dent in the 12 gauge’s potential. For years the “go to” long guns in patrol units, most often the pump, sat in the rack waiting patiently until needed.

Despite the burgeoning popularity of patrol carbines for LEOs or home defense, the 12 gauge with buckshot actually exceeds them in lethality, within its working range out to 35 or so yards. Eight or nine pellets of 00 buck following their own separate wound channels is certainly an attention getter.

I know the shotgun cannot deliver buckshot precisely enough that most of us would chance a headshot on a hostage taker, what with a Murphy-touched flyer potentially hiding in the pot. The term scattergun seems explanatory enough. But with a good sighting system in a well setup and tested system, transitioning to slugs can extend that working range to 50+ yards. Which brings up the shotgun’s ability to use a variety of ammunition.

For LE work, frangible buckshot for door breeching comes to mind. Then there are the less lethal munitions the shotgun can be fed. (A triple-checked gun, or one clearly marked for less lethal only, right?) Carbines can’t handle all this.
One of the most popular names in shotguns—civilian, law enforcement, or military—is O. F. Mossberg & Sons. Mossberg shotguns have brought home the game for 90 years and in more recent times their pump guns have been at the side of LE/military personnel. I’ve known a number of people, in and out of LEO circles, who have worked their Mossbergs hard for years on end, and remained satisfied. 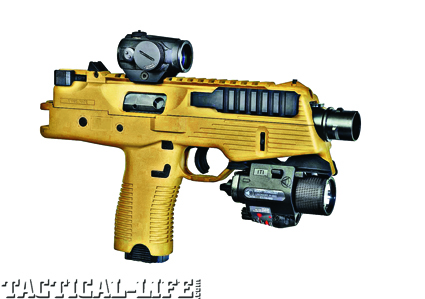 A shotgun refresher class, or an afternoon spent brushing up on shotgun skills quickly…