0
SHARES
34
VIEWS
Share on FacebookShare on Twitter
In an industry filled with strong personalities, characterizing Patriot Ordnance Factory (POF-USA) President and CEO Frank DeSomma is easy to do with one word: passionate.

“Our POF-USA logo reminds me of when this country was great,” DeSomma said, “back in World War II, when the people in this country united and stood together.” A half-century later, Frank DeSomma started his own version of the American Dream by starting POF-USA. “The proof is in the pudding. There’s no doubt that a little company like us, which started in a garage, can make some big changes in the firearms industry.”

POF-USA is dedicated to providing the highest-quality parts and accessories for law enforcement, military and civilian sales at the lowest prices available. It is an American owned and operated small business. Its manufacturing and research and development facilities are headquartered in Phoenix, Arizona. POF-USA specializes in the design, manufacturing and marketing of AR-style rifles, upper receivers, lower receivers and miscellaneous gun accessories.

POF-USA is dedicated to gas piston-operated AR-style rifles, and it’s extremely proud of the durability and performance of its P308 and P415/P416 rifles. These models have eliminated features of the traditional direct gas impingement operating system, such as gas rings, the gas tube and the gas key. The P308 and the P415/P416 systems also minimize heat, carbon buildup and gas leaks, which can have an adverse effect on the operating system.

Frank DeSomma has 28 years of experience working in an industry most recognized for precision, quality and reliability—the aerospace industry. His success in the manufacturing business is based on his skill and experience in troubleshooting as a process engineer. As a sport shooter and lifelong student of quality and precision, DeSomma decided to embark on a voyage to improve the traditional gas impingement design of the AR-style rifle. “We are the first gas-piston-operated weapon system on the AR-style rifle platform to sell to the market,” DeSomma said.

POF-USA, which began in 2002, celebrates its 12th anniversary this year. When asked why he started the company, DeSomma said, “I never planned on it. I was selling firearm parts. I was in the aerospace industry, and started working on a belt-fed machine gun and tinkering on rebuilding parts kits for the FAL. I never really liked the AR…the gas impingement products. I didn’t want to be a ‘me too’ company. They [manufacturers] really hadn’t changed the gun in a long time. They were just building the same gun with another widget on it. Doing that wasn’t going to set me apart. In 2004, at an industry trade show, we just got laughed at when we introduced our piston guns. At the same show in 2012, companies were selling piston guns like hot cakes. Today, you’ve got all of these European gun companies that are leaving their original designs to build and sell AR-platform rifles and 1911s.”

“There’s no doubt that a little company like us, which started in a garage, can make some big changes in the firearms industry.”

One of the attributes that sets POF-USA apart from more than 200 AR builders is its innovation. “We worked on and developed a lot of new features for ARs,” DeSomma said. “If you are shooting a lot of rounds, our piston system is better than an impingement gun. Period. From a mechanical standpoint, we proved that the piston guns run cooler. What do you do when you’re in a squad in Afghanistan and its 135 degrees? If you have a full-auto gun and it takes off from a cook-off, that’s a problem. If you are taking a carbine class, the instructors will tell you to ‘keep it wet.’ You wind up with a cesspool. All that debris and oil from dropping your magazines on the ground puts debris in the chamber, and you wind up with a sticky chamber. If you are going hunting and shoot 20 rounds a year, a gas impingement gun will work just fine.”

Other innovations that DeSomma is proud of include his roller cam-pin design to reduce bolt drag. “We modified the gas key for the M16, too,” the former aerospace engineer added.

DeSomma was also a pioneer in firearms parts treatments and coatings. “A lot of the heat treating and coatings—they were used in the aerospace industry, but not in the gun industry. I do a thing called CROS [Corrosion Resistant Operating System] to mitigate rust and corrosion. A lot of gun parts are phosphated, and they are going to rust. If you put a drop of water on a phosphated barrel and come back the next day, it will be rusted. As far as our guns for hunting, they’re made to withstand the elements.” 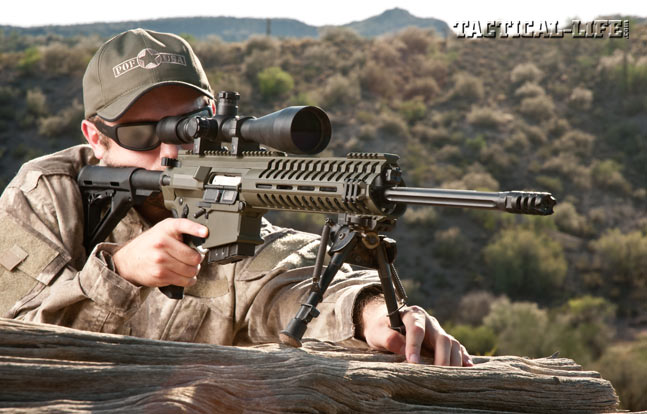 DeSomma is a big fan of short-barreled .308 ARs. “Four years ago, a spec-ops group came to us, and we built them 12-inch-barreled P308s,” DeSomma recalled. “They wanted a small .308 that they could blend in with regular troops.

These snipers were having problems being targeted when they would go into an urban setting carrying a long-barreled sniper rifle. They wanted to ‘own it’ from 500 yards and in. They were hitting targets out to 660 yards with this setup. They were the ones who brought the information to me about the effectiveness of a short-barreled .308.”

“If you are shooting a lot of rounds, our piston system is better than an impingement gun. Period.”

With that newfound knowledge, DeSomma started promoting the short-barreled .308 ARs to local law enforcement agencies. “Why would an LE guy in an urban environment want to deploy with a 26-inch-barreled bolt action?” he said. “The Maricopa County Sheriff’s Office uses our P416 for entry, and they use our 14.5-inch-barreled P308 for their sniper rifle. Our gun shoots sub-MOA at 300 yards. Our LE snipers will use a vehicle for a hide in an urban area, and if they set up with a 26-inch gun, well, that’s ridiculous. You can set up with a 14.5-inch gun with a suppressor on it and be comfortable inside a vehicle. The Maricopa County Sheriff’s Office wanted a gun for overwatch. We took 20-, 16.5- and 14.5-inch-barreled guns for Sheriff Joe Arpaio to shoot. Shooting out to 710 yards at an IPSC plate, they were consistently hitting it with the 14.5-inch-barreled gun.

“ARs are more than just a military application gun,” DeSomma said. “ARs are great for hunting. I’ve been hunting in Alaska the past two years. I hunt with a 14.5-inch-barreled .308. Accuracy has nothing to do with barrel length. It affects velocity, but not accuracy. You just have to allow for more elevation. For me, I don’t take hunting shots beyond 325 yards. I know that I can shoot my 180-grain .308, and it’s still got 1,500 pounds of energy at 300 yards. For hunting, I believe these ARs are a great platform.

“We go hunting with our fathers, and they take us hunting with rifles that their fathers used,” DeSomma said. “A lot of men and women are coming back from military duty familiar with the AR. That’s one of the reasons this platform has become so popular with the civilian market today. We’re pushing more into the hunting market, and the .308 AR is a great hunting gun.”