Generally, when one considers the weaponry used by elite counter-terror units, the latest and most sophisticated pistols, rifles, and SMGs come to mind. This is usually the case. However, three top-level counter-terrorist units used the same revolver for many years—the French MR73. These units weren’t unique. At various times SEAL Team Six, GSG-9 and the Dutch Marines BBE used revolvers. But for many years, the MR73 was the standard revolver for France’s GIGN and RAID, and for Austria’s GEK Cobra (currently EKO Cobra). France’s Presidential protection unit, GSPR, which at the time was drawn from GIGN, also used the MR73.

Admittedly, the French units chose the MR73 partially because it was a French product, but they also used the best weapons they could get, no matter the country of origin. At least one unit member, for example, was a big fan of the S&W Model 29. It should be noted, too, that any discussion of the world’s best revolvers will include the Manurhin MR73. The German Korth or the U.S. Colt Python will likely be mentioned as well, but the MR73 will be among the top.

Reliable MR73
Many factors contribute to the MR73’s quality. Perhaps the most important factor in the choice of the MR73 by counter-terrorist units was its durability. Top-tier units fire hundreds of rounds per day to keep their skills. Reportedly, GIGN operators fired 150 rounds of full-power .357 Magnum ammo through their MR73 every day. That’s more rounds per month than most revolvers fire in a lifetime of use. MR73 revolvers are also renowned for accuracy. Each MR73 had to score sub-20mm (0.8-inch) groups for 5 rounds at 25 meters. That’s at least as good as the groups fired by most custom 1911s. 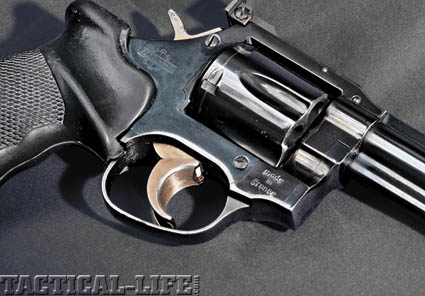