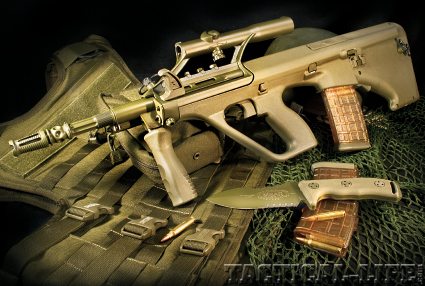 Mountain infantry from both Germany and Austria share the Edelweiss insignia, a flower native to high alpine regions, bursting with nine petals. Created in 1907 as a symbol of Austro-Hungarian Landesschützen regiments, the device was used to honor the German Alpenkorps (Alpine Corps) after these soldiers came to the aid of Austro-Hungarian forces against assaulting Italian forces in May 1915. Overcoming harsh terrain and weather, Hungary’s southern border was successfully defended. 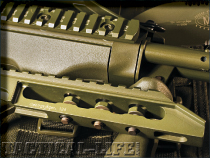 By the Second World War, the Gebirgsjäger (Mountain Huntsmen) began to set themselves apart by wearing the Edelweiss insignia on their sleeves and caps. These elite troops no longer wear the same uniform or carry the same rifles, but their honorable traditions continue in Germany’s support of the ISAF in Kabul, Afghanistan. The Edelweiss symbol is also now part of limited-edition tribute from MSAR (Microtech Small Arms Research).

Elite Riflemen
During World War II, Germany formed a corps of mountain infantry. These lightly equipped troops often used mules to maneuver through arduous terrain and carried relatively fewer machine guns than the regular army. From these ranks, Wehrmacht snipers Matthäus Hetzenauer and Josef Allerberger rose to fame. Hetzenauer has been credited with 345 kills (the longest being reported at 1,100 meters) and Allerberger with 257 kills.

After World War II, silence fell upon Gebirgsjäger history until the creation of the Bundeswehr in 1956. Today’s modern brigade of mountain infantry are stationed in southern Bavaria and known as Gebirgsjägerbrigade 23. Elements of this brigade make up Germany’s 3,730 fighters serving the ISAF (the 3rd largest troop contribution) in northern Afghanistan as of May 2009. These soldiers excel at combat in extreme weather, and prepare other NATO troops for winter warfare in urban, arctic, mountain and desert terrains.

It takes more than a skilled rifleman to make a mountain hunter. The Gebirgsjäger is conditioned for work in low-oxygen altitude and is trained in the treatment of frostbite and hypothermia prevention and every facet of high-altitude, cold weather operations. In addition, every soldier is a map reader whos mastered topographic obstacles such as distance over changing elevation. Mountain troops are mobile weathermen, taught to read the forewarnings to anticipate weather that can quickly change. Above all, these soldiers are instructed to take advantage of terrain and engage the enemy. With many issued the standard AUG bullpup rifle, the new MSAR STG-556 is an appropriate tribute recognizing a unique, battle-tested group of soldiers.

Mountain Rifle
Mountain units require robust kit. The NATO adoption of the 5.56 x 45mm cartridge is dictated by logistical requirements of operational standards. Therefore, after World War II the late ’70s adoption of the AUG as the StG-77 changed the structure of German and Austrian mountain brigades to include specialist units with equipment capable of reaching longer ranges (such as the HK G3 and G36).

Wearing nothing but OD green, MSAR’s Gebirgsjäger is a limited production version of Microtech’s highly desirable and extremely reliable STG-556. A 1.5-power optical sight is well suited for CQB operations and can be swapped out for the supplied 9-inch Picatinny top rail. Six-inch side rails can be attached to the receiver for additional accessories and everything is kept close to the body by a sling designed by Giles Stock. Open up the custom green Pelican case and three 30-round magazines are fitted beside the rifle, as is a fixed double-edge Microtech Currahee knife and sheath.

Six main assemblies make up the rifle design that has been effectively used by troops under 30 different flags. The receiver carries the sight assembly (or optional Picatinny rail) and houses the bolt, bolt carrier, and a good length of the barrel assembly. Joined with the stock, the trigger and hammer group are ready to work in harmony with the magazine.

The 4150 chrome-moly barrels are available in either14-, 16-, or 20-inch lengths. Although the MSAR Gebirgsjäger is chambered for the international and German-issued 5.56 NATO cartridge, a 6.8 SPC-chambered barrel can be quickly adapted as an option. Barrels are slightly fluted and can be switched out in less then three seconds by a practiced operator. Switching to an integrally suppressed barrel assembly, shooters benefit from eliminated flash and a sound reduction of 36 decibels. When using a suppressor or low-pressure ammunition, it may be necessary to switch the two-position gas regulator to allow more gas for proper functioning in extreme circumstances. It’s positioned cleanly in parallel with the barrel to the right of the receiver.

Seven locking lugs on the bolt head secure the chamber during firing. During the cycle of operation, a cam moves along a recessed guide channel on the bolt carrier and two recoil springs compress, absorb, and return the bolt group to quickly drive an unfired round into the barrel’s chamber. Sporting ambidextrous features, the STG-556 can be deployed comfortably by virtually any operator. Depending on which ejection port is opened and which bolt is used, a spent case can be extracted and ejected to either the right or left side.

The 7075-T6 receiver is vacuum-melt cast and machined to a tolerance of less than 0.001 inch. Following a quality assurance check, the Gebirgsjäger is then anodized in OD green and finished with a laser-engraved Edelweiss flower. Quality control is held to such a rigorous standard that virtually any part will work in another STG-556. It can be quickly adapted for various situations demanding a distance or caliber requirement with the quick-change of a barrel, bolt, and magazine, or addition of rail-mounted accessories and a higher-power optics.

The stocks for a standard STG-556 are available from MSAR in black and even Multi-Cam but at the time of this writing, an entirely OD green STG-556 is only available in this limited package. The stock is made of two rugged composite halves that are friction-welded under 15,000 pounds of pressure. Due to an innovative process, only the points subject to friction are heated enough to bond the stock halves, improving the structural rigidity of the rifle’s stock.

Special materials are not limited to construction of the rifle. MSAR also uses them to produce the magazine. Made of a DuPont medical plastic known as “radel” (polyphenylsulfone), the Gebirgsjäger’s 10-, 20-, 30-, and 42-round magazines are lighter than metal and totally corrosion resistant. As the magazines are translucent, the shooter can visually identify the need for a mag change.

Today’s modern manufacturing processes and MSAR’s multi-million-dollar investment in computer-aided drafting and CNC machines keep tolerances close with minimal rejection. Due to the advanced engineering, the original bullpup concept is now a practical advantage for troops that travel light.

Shooting Impressions
Testing the suppressed and select-fire variants after exploring the MSAR factory, TW obtained the Gebirgsjäger and evaluated it through a five-day carbine course at the U.S. Training Center. During stages of opportunity, other classmates and instructors (including both LE and SF personnel) ran the Gebirgsjäger through their own evaluations but each came to the same conclusion.

“It’s amazing how easy it is to accurately fire and control the STG-556 under rapid fire,” said Instructor Bill Go. This is attributed to the bullpup configuration, which places more weight towards the rear than the common M4s used in training. “Pivoting on the shoulder, the 27-inch OA length rifle quickly jumps to the alert, giving a split-second advantage to the operator in stabilizing the muzzle and suitable sight picture.

On average, the two-stage trigger of each of three test rifles broke at slightly more than seven pounds. It’s suitable for combat operations as an infantry rifle, where a light trigger isn’t something that’s issued to anyone but marksmen. From the prone position with no artificial support at 100 yards, TW printed sub-2-inch groups again and again.

Conquering Peaks
The global trend towards low-intensity conflicts currently places the Gebirgsjäger in a lead role of UN operations. Operating in high altitudes presents many challenges. Terrain like that in the Afghan mountains offers the ability of prepared small units to hold off a much larger and technologically superior force. It’s an environment where trucks give way to mules and airstrikes are difficult to effect.

German and Austrian mountain infantry are still identified by the Edelweiss insignia worn on their uniform. Adopted as the “Universal Army Rifle,” the now battle-tested AUG design is known to the Bundesheer as the StG 77 (Sturmgewehr 77). Just like the light infantry the Edelweiss represents, the AUG design was far ahead of its time. Both rifle and soldier continue to withstand numbing cold, falls among the mountain terrain and still remain capable of delivering unquestionable performance. The Gebirgsjäger is still the ideal weapon for conquering the world’s tallest peaks. Visit msarinc.com 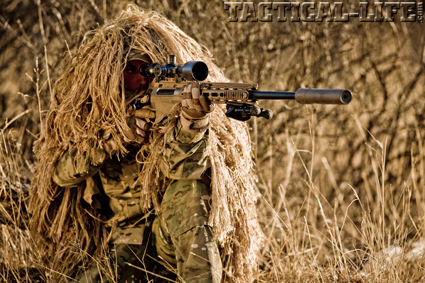 Mountain infantry from both Germany and Austria share the Edelweiss insignia, a flower native…