The chairman of the Joint Chiefs of Staff spoke to reporters traveling with him aboard a C-17 Globemaster III transport. He said he looks forward to discussions with Army Gen. Raymond T. Odierno, Multinational Force Iraq commander, and meeting with troops in here and in Talil and Baghdad.

The chairman arrived in Iraq after a four-day trip to Afghanistan and Pakistan. A USO troupe is traveling with him. Singer and actor Billy Ray Cyrus, tennis star Anna Kournikova, comedian Dave Atell and tennis coach Nick Bollettiere are entertaining troops as the chairman holds his meetings.

Mullen is looking for an “on-the-ground understanding of where we are” following three major bombing attacks in Iraq since August. “The reaction and how they have been handled are the most significant results,” the admiral said.

The chairman expressed his sorrow over the losses and the killing of innocents. He said all intelligence points to al-Qaida terrorists as the perpetrators and that the attacks are not sectarian in nature.

The attacks are very focused, very well-planned and do not require a large number of people in on the terrorist plot. “That seems to be where al-Qaida is going now,” he said.

The chairman also said he wants to discuss the situation between Arabs and Kurds in the northern part of the country. The status of oil-rich Kirkuk, which both ethnic groups claim, could be a flashpoint in internal Iraqi relations, he said.

Mullen also said he wants to reaffirm the U.S. intent to withdraw from the country, and he will discuss the logistics behind that. Roughly 110,000 Americans are in Iraq today, a number that is expected to drop to about 50,000 by the end of August. All American forces will be out of the country by the end of 2011.

Iraqi national elections are scheduled for March 7, and American forces will remain at their present strength until then and will be on call if Iraqi forces run into a situation they believe they cannot handle alone. The Iraqi police and Iraqi army will handle all security issues for the elections.

Mullen also will speak with soldiers from the 1st Armored Division’s 4th Brigade, the first of the “advise and assist” brigades deployed to partner with, mentor and teach Iraqi security forces.

The logistics of moving personnel and mountains of supplies and equipment out of Iraq also will be part of the chairman’s discussions during his visit. The situation is complicated by President Barack Obama’s decision to send another 30,000 American troops to Afghanistan in the first half of 2010. Moving forces into and out of Afghanistan, plus deciding what equipment stays in Iraq, what goes back to the United States and what moves to Afghanistan is at issue.

“I need to see where General Odierno and his people are and how they see it.” He had similar discussions with officials in Afghanistan this week, he noted, adding that the logistics effort will be a constant focus of his over the next year. 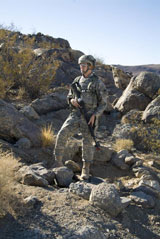 Soldiers train to use forensic science to catch insurgents

BASRA, Iraq, Dec. 18, 2009 – Discussions about upcoming elections and the withdrawal of…