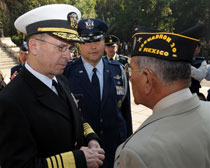 WASHINGTON– The combined capabilities and military cooperation between Mexico and the United States can defeat the drug cartels that plague both countries, the chairman of the Joint Chiefs of Staff said in Mexico City yesterday.

Navy Adm. Mike Mullen held discussions with Mexican leaders and then spoke to students at the Mexican Naval War College during a visit that capped a five-day trip to Latin America.

“We are capable countries,” Mullen said at the war college. “This is not a threat we can’t beat. We can, working together, defeat it.”

Mullen met with Mexican Secretary of National Defense Gen. Guillermo Galvan and Secretary of the Navy Adm. Mariano Francisco Saynez. Both men lasered in on the drug cartels and the inherent danger for both countries. “It is an enormously serious problem that has grave implications,” he told the students.

The chairman noted the similarities between terrorist groups and drug cartels. Both are amorphous networks, and good intelligence is crucial to breaking both, he explained.

“There are characteristics of it that we have developed the capabilities to fight in our military in the last several years that have direct application, and I think can assist greatly,” he said. “Through cooperative efforts, we have to figure what’s the best way to do that.”

During an interview aboard the plane on the way back to Washington, Mullen praised the stand that Mexican President Felipe Calderon has taken against the cartels. The commitment of the Mexican military to the fight is significant, he said, and came about in response to the level of corruption that exists in government, including in the police.

“The best I can tell, the leadership in Mexico is aware of the problem and is addressing it,” Mullen said.

Intelligence sharing and intelligence, surveillance and reconnaissance capabilities are two areas where the United States military can help Mexican forces, Mullen said. And the opportunity is there. The military-to-military relationship with Mexico is in the best shape he has ever seen, he added.

“There is a significant opportunity to continue to cooperate and to focus very heavily with respect to the needs on the border and the kinds of capabilities that they need from an intelligence and equipping piece,” he said.

The U.S. and Mexican militaries have had fairly extensive military-to-military training for some time, especially between the Mexican navy and the U.S. Navy and Coast Guard. “There has been training evolving with respect to their army,” Mullen said. “General Galvan is very enthusiastic about continuing and increasing that training.”

Mullen stressed that while the military has a role to play, there a number of other U.S. agencies are working with Mexico, including the State Department, the Department of Homeland Security and the Drug Enforcement Agency. “There are fairly far-reaching areas of cooperation, and these are very much ongoing,” Mullen said during the interview.

Funding the fight correctly is important, the chairman said. The United States continues to help Colombia battle narcoterrorists. He noted that funding for aid to Colombia was consistent over a number of years. “The level of assistance that was predictable over a period of time,” the chairman said, “allowed the capabilities to be developed there.”

Mullen discussed the Merida Initiative with Mexican leaders. The unprecedented initiative calls for close cooperation between the United States and Mexico to combat drug trafficking, arms smuggling, money laundering and other transnational crimes.

The program calls for the United States to provide $1.4 billion for equipment and training over the next three years. Congress approved the first funds in December. “We’re working very hard to … move those resources to Mexico as quickly as we can,” Mullen said.

At the Naval War College, Mullen said it is important to set expectations for the Merida Initiative.

“It’s a lot of money,” he acknowledged. “That said, my own system can be pretty bureaucratic, and it can take longer than we want to deliver. Where I see us on Merida right now is we are getting started – getting the pump primed – for a significant increase in assistance.”

Aboard the plane, Mullen said he was impressed with the level of commitment he saw for the fight on the drug cartels.

And the questions were not confrontational, he noted. They were more on the line of how and where the two militaries can work together.

The visit to Mexico culminated a high-profile trip to Latin America, in which he also visited Brazil, Chile, Peru and Colombia. The main purpose of the visits was to connect with military leaders and to understand mutual challenges.

“I have been and will be a proponent of focusing on Latin America – the relationships, the strengths and the challenges,” Mullen said. “None of us can do it alone. The challenges continue to grow, and they must be addressed collectively.”

The United States is fighting two wars in the greater Middle East. “I’ve had notionally 80 percent of my forces focused on the Central Command region – the two wars,” he said at the War College. “There’s another 20 percent available to focus on other parts of the world. We work very hard to focus on Latin America and the relationships. We’ve had significant successes in support of and in cooperation with many countries.”

Mullen told the students he is pleased with the improvement in U.S.-Latin American relations. He praised the leaders of the region, and Mexico in particular, for the way they have opened doors to military cooperation.

“I think because of the leadership in Mexico has opened the doors and the strong desire to connect, I’m encouraged by the change in engagement and the exchanges between our militaries,” he said.

“You are not just a neighbor, but a great friend,” Mullen said at the War College. “We share a rich heritage, and that heritage will become richer for our children and grandchildren. It is for leaders to act now so that the heritage continues to be robust and provide for the safety and security of our young ones.” 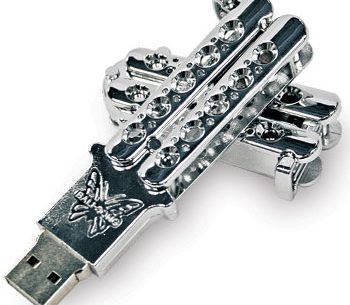 While offering standard functions, the BENCHMADE’s USB Flash Drive looks like a Bali-Song from...