by Massad Ayoob
in Guns
0

0
SHARES
4
VIEWS
Share on FacebookShare on Twitter
In a fast-breaking felony stop, you never know if you’ll have time to access a long gun. Train with your duty pistol and use the door of your cruiser, as Case Four illustrates, for protection. Sean Utley photo

If we taught every officer to pilot the patrol car like a professional race driver or fight like a professional Mixed Martial Arts master, there would be no time to teach them to perform day-to-day routine police work. This is why the law enforcement establishment can’t teach every cop to shoot like a 3-Gun champion. However, we can extrapolate from those other arenas and teach techniques that officers can use effectively on the street. One way we can make firearms training more efficient and street-relevant is to teach shooting stances and techniques that will transfer from a service pistol to off-duty and backup handguns—and even to police shotguns and patrol rifles.

With that in mind, I queried two famous policemen who’ve been in gunfights with both handguns and long guns. They each also have extensive background in teaching their skills to brother and sister officers. One is my old friend, Bill Allard, now retired from the NYPD. He was the lead firearms instructor for the legendary Stakeout Squad, and the one man on that unit who killed more armed robbers in gunfights than his famous partner, Jim Cirillo. 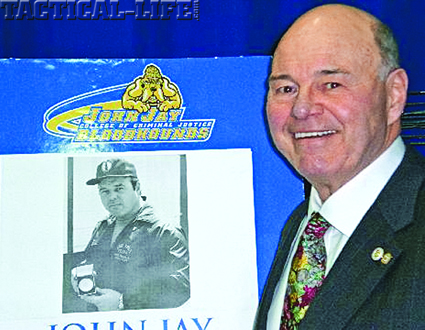 Bill Allard poses with a photo of himself from his days in the NYPD’s Stakeout Squad.

In a shootout I’ll call Case One, Bill emptied his Ithaca 12-gauge shotgun into a pair of heavily armed gunmen, only to find both of them still up and running after a total of five solid 00 buckshot hits. Transitioning to his S&W Model 10 service revolver, he pumped three .38 Special bullets into each man’s chest. By that point, both gunmen were down, but one was still trying to shoot him from the floor with an auto-loading carbine. Bill dropped his empty .38 and drew his specially authorized backup, a 1911 .45, and put seven rounds into the last gunman’s torso and the eighth into his head. Reloading from slide-lock, he realized at last that the gun battle was over and both of his antagonists were dead.

Bill Allard advises the readers of Guns & Weapons, “The opposite foot of your trigger hand goes forward when you are using a rifle, submachine gun, or shotgun. The other foot is to the rear. The butt of the gun should be tucked into your shoulder pocket, and your elbow should be held high, just about level with the shoulder. This keeps the butt from rolling out, away from the body. Of course, you are pulling the pistol grip tight into the pocket you created.” With this stance, and your body weight forward, says Bill, you can “recover faster for your next shot. In all my gunfights, I never fired just one shot with my 12-gauge Model 37 pump.”

With a handgun, Bill advises, “During a close encounter [within 10 yards], your stance should have both arms pushed out front, elbows locked tight and shoulders rolled in.” This Isosceles-type stance also squares your body armor most efficiently against the armed man you are shooting at.

Bill Murphy retired to become a full-time instructor after more than 30 distinguished years of service as a municipal police officer in California. Over the years, duty required him to shoot three armed, would-be cop-killers to death—each time with a different police firearm. In the first incident, Case Two for our purposes here, he and two other officers responded to a routine disturbance call. Suddenly, their subject reached for a .357 Magnum revolver. Bill drew his Sig P220 to a hard “modified Weaver” stance, with his upper body forward, gun arm locked straight out, and support arm bent sharply down at the elbow. He fired two fast Winchester 185-grain Silvertip .45s into the man’s heart, and the gunman staggered backward, still trying to shoot the officers. Murphy raised his Sig pistol and delivered a third shot to the head. This time the antagonist went down. Bill remembers using a hard grip with both hands throughout the shooting. 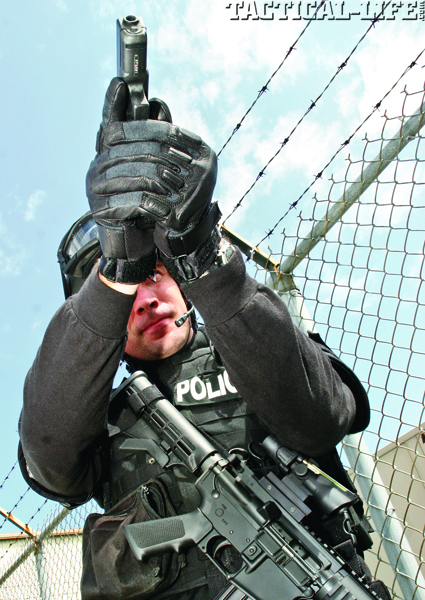 If a patrol rifle malfunctions or runs out of ammo, learning to transition to a pistol can be a true lifesaver. Speed is the key. Jeff Rose photo

In Case Three, now on a SWAT team, Murphy was one of several officers attempting to contain and capture alive an extremely violent offender who was armed with a 7-inch boning knife. A large quantity of pepper spray, 14 strikes from a beanbag shotgun, and the Taser had all failed. When the man lunged at Bill with his knife, Murphy—already a trainer at Gunsite on his own time—moved off mid-line to keep his distance, but the knife-wielder turned and stayed with him. There was nothing Bill could do but fire. He triggered a three-shot burst of Winchester Ranger 147-grain JHP through his suppressed HK MP5SD submachine gun into the aggressor’s torso, dropping him instantly. Bill told Guns & Weapons, “Basically, I was in a combat crouch moving back. I brought the gun down so he couldn’t grab it, into what we now call a close guard position. The gun is level in front of the armor with the butt against the armor, in line under the right eye. I could see the front sight, but at my pectoral level. I was gripping the weapon firmly, with my shoulders forward and knees flexed as I fired.”

Case Four found Bill and other officers facing a man who had shown them his pistol, then stowed it in a pocket. Murphy was armed with a Vang-Comped Remington 870 pump shotgun with Remington slug sights and a SureFire white light attachment. Attempts at negotiation proved fruitless, and the man tunneled his eyes on Murphy and drew his pistol, aiming at him in a one-handed gunfighter’s crouch. Bill sent a 1-ounce Winchester hollow-point 12-gauge slug through the center of his chest, as his partner shot the man with a Federal 55-grain TRU bullet from his M4, and other officers opened fire.

Bill recalls that he was positioned “with the engine block between us, while I was in the ‘V’ of the door, using the vehicle for both support and cover. I had a firm grasp, with the shotgun butt high on my shoulder with both shoulders forward. My left leg was out of the vehicle, solidly braced.”

With pistol, revolver and shotgun for Allard and pistol, SMG, and shotgun for Murphy, we have men who were in immediate deadly danger yet fired with unerring accuracy. Each achieved 100 percent hits in the shootouts discussed above. We see certain elements of technique in common no matter the weapons they used: a firm grasp with both hands, shoulders forward to get upper body weight behind the gun, knees slightly flexed for balance and mobility, chests squared to their opponents as much as possible to keep their ballistic vests between their own vital organs and the predictable path of incoming gunfire from their opponents. Guns & Weapons and this writer wish to thank two of the great police gunfighters of modern times, Bill Murphy and Bill Allard, for sharing their lifesaving experiences and advice.