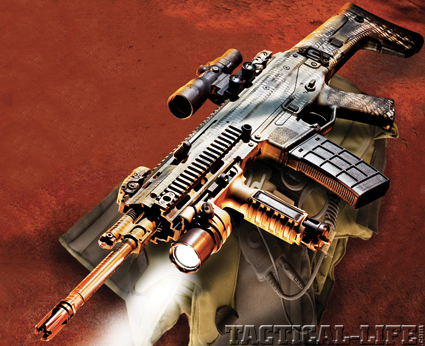 “Adaptive” is the descriptive part of this new weapon’s name. Within the widely varied missions given American military forces, there is frequent need for a small arms system of unique capabilities or configuration, or even caliber.

The ACR (Adaptive Combat Rifle) has been available for purchase nearly a year now. This rifle was originally the concept of Magpul, an innovative company founded in 1999 to develop a simple device to aid in the manipulation of rifle magazines, while reloading under stress. In the ACR’s infancy Magpul called the ACR the “Masada,” after the name of a site of ancient fortifications in Israel. The concept of the Masada—provide the ultimate, individual, battlefield weapon—was very straightforward.

Remington’s and Bushmaster’s new ACR is already being tested by various LE agencies in the U.S. and abroad, such as the San Jose, CA, PD, and by police agencies at the federal level. The adaptive nature of the ACR, its efficient ability to mount sights, lights, accessories and suppressors brings considerable appeal to the law enforcement arena.

The Magpul Masada incorporated what many consider excellent combat rifle features from established firearm designs like the FN SCAR, HK G36 and the M16/AR15. The Masada also includes several features developed by Magpul such as a quick-change barrel, adjustable gas regulator, non-reciprocating charging handle, and storage compartments located in the stock and grip. Firearm design is important but mass production is key to the success of any weapon system. A partnership between Magpul, Bushmaster and Remington is what ultimately made the ACR a reality.

The ACR is a shoulder-fired, magazine-fed, semi-automatic, air-cooled, tactical carbine that functions via a regulated, short-stroke gas piston operating system. ACRs are available from both Bushmaster and Remington. Bushmaster focuses on civilian and law enforcement sales, while Remington’s goal is military and government contract purchases. Rifles from Bushmaster and Remington are essentially the same, with minor differences. According to John Day, Director of Remington’s Defense Division, the Remington ACR for example, might be altered to meet specific government contracts that specify a lighter or ergonomically different design.

“Adaptive” is the descriptive part of this new weapon’s name. Within the widely varied…