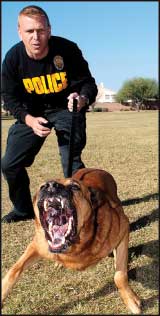 U.S. Customs and Border Protection (CBP) is the crucial filter to stop the influx of multiple threats to national security, including narcotics, weapons of mass destruction, explosives, illegal aliens, illegal currency or myriad items of contraband. Vital working partners in this endeavor are CBP canines and their handlers. They train at a leading-edge facility known as the CBP Canine Center near Front Royal, VA.

This federal LE training facility was established in 1974 as part of the war on drugs, and is now at the forefront of securing our border from a multitude of threats. The proven success of using canines for various detection roles has resulted in an expanding mission. This role is not just mission creep, rather it represents a validation of the entire concept using dogs in such tasks, and is a tribute to the dedication of the people training the dogs and their handlers.

Outside the military, the U.S. Customs Service of the 1970s was a pioneer in training dogs for law enforcement missions. The CBP Canine Center has worked with numerous state and federal law enforcement agencies and more than 50 foreign countries. Since CBP’s incorporation into DHS in 2003, its canine experience has been made readily available to sister agencies, such as the United States Coast Guard and TSA. The years of experience at CBP Canine Center provide a solid grounding in training methods and ideology that aids other agencies getting up to speed in an ever-changing threat environment.

Instructor Donald Deason discussed numerous examples of custom-built training aids employed at the CBP Canine Center, noting that such items are possible due to the institutional memory at the Canine Center from staff who have served for many years, and well. For example, Director Titus has been involved with Customs’ canine programs since 1980 and Instructor Donald Deason’s own tenure started in 1994.

Detection Training
The ability to have a dog and handler operate at a quick pace, even a run, has been a skill honed over the years and is a characteristic distinguishing CBP dogs from canines trained by others.

A good example of the center’s adaptability is the shift away from dogs trained to exhibit a positive response characterized by biting or scratching when an item is found. Dogs are now trained in a passive response—to sit or lay when a trained-detectable scent is discovered. The nuance between passive and positive response is important, as when dogs are used at airports among passengers. Safety and common sense dictate you do not have a dog chew on a passenger or their belongings. Another example of changing technique is the CBP’s expanded mission of detecting explosives. A dog roughly handling an explosive device before an EOD technician arrived would be imprudent. Dogs trained at the center are not exposed to aggressive “bite” or patrol-dog mentalities: They are detectives, not riot police.

Teams—handler and dog—are trained for specific missions such as narcotic, concealed humans, explosives, currency, or weapons of mass destruction detection. Cross training is only applicable when a narcotic dog is also trained to detect concealed persons, an important capability at border crossings. Narcotic courses are 13 weeks and explosives courses are 15 weeks.

A 21-day pre-screening exam must be passed by each candidate. This character-trait and potential-for-learning exam has given the center a 90 percent graduation rate among teams. The first week of the 13 week course is academic, with the next eight weeks training being hands-on. The final weeks of are spent at various airports and border crossings. The center is convinced that the dogs should be fully exposed to the activity of a busy airport setting during training, to fully acclimate handler and canine to actual working conditions. The same is true of the heat and long lines of traffic at southern border crossings. The CBP teams are re-certified every six months if explosives are the trained scents, every year for narcotics. Skills must be maintained. Personnel outside the CBP are encouraged to have instructors trained so that a cadre can be established inside different agencies or departments that come to the center.

An agency can’t establish an effective canine program by merely sending a couple of teams thru the center. Of great importance are the logistics of maintaining training, facilities, veterinarian care, and instructors.

The 300-plus acre campus accommodates 160 dogs. It has approximately 50 staff members, including 17 instructors. It trains around 150 teams a year. It has its own veterinarians, kennels, and training materials on site and views itself as a DHS asset. Teams are available for special duty.

Federal Program, Local Protection
The property is dotted with scenario-based areas ranging from parking lots, buses, aircraft fuselages, to luggage carousels, fields, and numerous other structures. Working dogs are the preferred breeds for training and both the human and canine element of the team must exhibit patience, energy, persistence, and need to be eager but not aggressive. Ideal age for training the dog is between one to three years of age. Service life for a dog is five to eight years. A dog typically serves its entire tenure with the same handler.  Since 9/11, the detection role of canine teams has expanded to include explosives and weapons of mass destruction. The constant stream of contrails above the rural setting served as a reminder of what is at stake and daily threats. Realistic training in realistic settings is a mantra of the center. The dedication of the officers and dogs is impressive—and reassuring considering their assigned mission and what is at stake.

U.S. Customs and Border Protection (CBP) is the crucial filter to stop the influx…