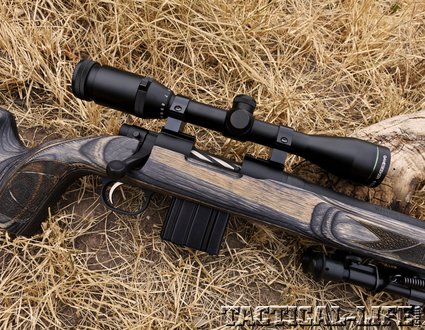 While O.F. Mossberg and Sons have been busy producing a variety of AR-type autoloading rifles and pump-action shotguns to meet the huge demand for tactical firearms, it’s good to see the company is still paying attention to hunters. Among Mossberg’s latest introductions is its MVP bolt rifle designed for hunting prairie dogs and other pesky varmints including coyotes and foxes.

The MVP (Mossberg Varmint Predator) rifle borrows a lot from the company’s popular 4×4 bolt rifle, but has features that definitely set it apart. For starters, the new rifle comes with a removable 10-round box magazine, but also accepts high-capacity AR-15 magazines—a first for bolt-action sporters. 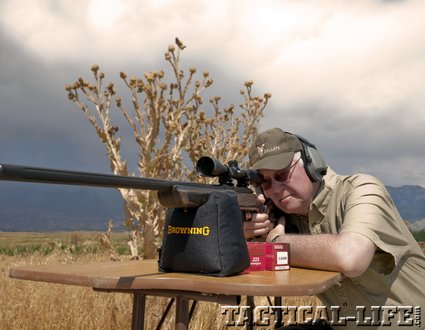 Another variation is that the new rifle is chambered for 5.56mm NATO ammunition. This allows it to safely digest both surplus military ammo and standard .223 fodder. While some shooters believe these two cartridges are interchangeable, that’s not really the case. The exceptionally popular .223 sporting loads have thinner case walls and are loaded to lower pressures than military 5.56mm ammo. Rifles chambered for .223 ammo have shorter throats and slightly shorter headspace. While it’s perfectly safe to fire .223 ammo in a 5.56mm chamber, the reverse isn’t true. Shooting 5.56mm NATO loads in a rifle chambered for .223 ammo can be definitely unsafe.

Why chamber the new MVP rifle for 5.56mm cartridges? It allows shooters to use both .223 ammo and increasingly plentiful 5.56mm military surplus loads—a win-win proposition.

When I removed the bolt from the action, I discovered another feature that makes this rifle unique. The recessed bolt face sports a patent-pending hinged arm that drops down to scoop fresh rounds from the magazine on the forward stroke. Before entering the chamber, the arm cams upward and out of the way. The patent-pending “Drop-Push” bolt was designed to ensure reliable feeding from AR-type magazines.

The body of the bolt has spiral fluting. This shaves a tiny amount of weight and reduces a bit of friction, but most importantly it simply looks cool! The bolt has twin locking lugs and—except for the hinged arm at the bottom—is recessed to enclose cartridge heads. It also has a spring-loaded plunger ejector and extractor. The two-position safety is located immediately behind the bolt handle when the action is in battery.

Like many of today’s new rifles, the MVP has a user-adjustable trigger. The Lightning Bolt Adjustable (LBA) trigger can be adjusted from 2 to 7 pounds with a regular screwdriver. To adjust the trigger, it’s only necessary to remove the hex-headed action screws and separate the barreled action from the stock.

The LBA mechanism features the “trigger within a trigger” concept first introduced by Savage several years ago. Machined from aircraft-grade aluminum, the Mossberg trigger assembly is hard-coat anodized to prevent corrosion and minimize wear. The inside trigger blade blocks the sear, preventing the striker from releasing unless the blade is fully depressed.

As it came from the box, the rifle had a 3-pound trigger. That was okay by me, so I didn’t attempt any further adjustment. The trigger broke cleanly and crisply with no discernable takeup or overtravel. 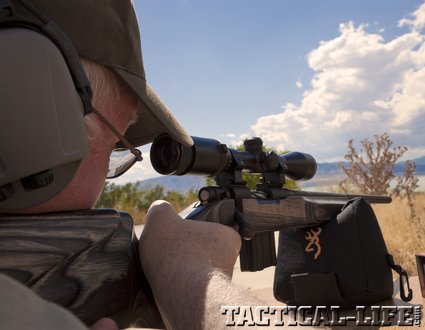 The author topped his MVP with a Pentax 4-12x40mm Gameseeker, but Mossberg does sell a Varmint Scoped version with a 4-16×50. 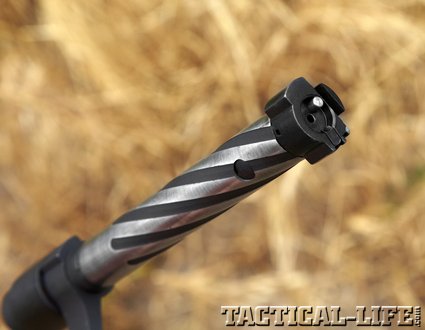 The MVP bolt has spiral cuts and an arm that pivots downward to scoop rounds from the magazine. Besides good looks, it cycles smoothly.

The rifle wears a green-grey-tan laminated stock sporting a wide, flat-bottomed benchrest-style forend. In addition to its attractive appearance, the laminated stock is extremely stable—virtually impervious to shrinking or expanding as the weather changes. Plain black synthetic stocks offer similar advantages, but aren’t nearly as handsome, nor do they feel as good in your hands.

The stock is pillar-bedded, and both pistol grip and forend are stippled to provide a non-slip grip. There’s also a palm swell for right-handers only—not ambidextrous. The area behind the grip is relieved for a more comfortable shooting position. The high comb is parallel with the centerline of the bore, placing your eye comfortably behind whatever scope you’re using. I mounted a Pentax 4-12x40mm Gameseeker scope featuring multiple horizontal crosshairs for targeting game at a variety of distances.

One of the things I appreciate about the MVP rifle is its surprising versatility. It’s light and handy enough to carry long distances through sagebrush desert country without raising a sweat. Prospecting for coyotes often calls for a fair amount of walking. I soon discovered the new Mossberg isn’t an unpleasant burden.

In contrast, the heavy-barreled varminters I’ve used over the years are intended to be employed from a stationary bench not many paces from your truck. At 10 to 11 pounds (with scope), dedicated varmint rifles are simply too heavy and awkward to lug very far. They’re great for decimating prairie dog towns at long distance, but excessive heft makes them unsuitable for everyday hunting chores. If you plan to sit at a bench and shoot all day, bull-barreled varminters are a terrific choice. But if you want to be reasonably mobile, you need something with a lot less heft.

At just over 7 pounds, the MVP is considerably lighter than most of the varmint rifles I’ve used. At the same time, its weight-forward balance and wide, flat-based forend allows the rifle to settle solidly into sandbags. 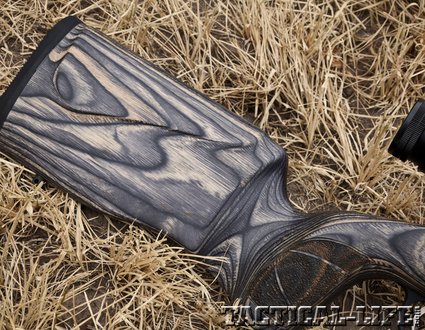 The Mossberg MVP’s buttstock sports a high, straight comb and a recessed grip to accommodate the palm of your hand.

The MVP has a dual personality. Light enough to carry afield, but solid enough to use from a sandbagged bench, this rifle gives both varmint and predator hunters the best of both shooting worlds. Another thing worth mentioning is that predator hunters driving between likely ambush sites will find the MVP much more convenient to load and unload when leaving and re-entering a vehicle. You simply drop the magazine, then open the bolt to remove the chambered cartridge. Rendering an AR-15 autloader similarly safe means removing the long magazine, then pulling the awkwardly positioned (if you’re seated in a vehicle) operating handle rearward to eject the unfired cartrige, which you must either catch in your hand or retrieve it from the ground or the vehicle’s floor. When you leave the vehicle, you must re-attach the magazine and activate the bolt release. Some shooters then automatically press the forward-assist plunger. For simplicity of operation, bolt-rifles like the MVP have autoloaders beat!

How the rifle performs from the bench is critical to its long-range varminting utility. To check this out, I assembled some 5.56mm NATO loads, including Black Hills ammo loaded with Sierra 77-grain MatchKing bullets and Federal American Eagle fodder throwing 55-grain Full Metal Jacketed projectiles.

As usual, I did my accuracy testing at my makeshift desert range. Unfortunately, I won’t be able to shoot in the desert much longer, at least until the dry season ends. Local authorities claim at least 5 of this years’ wildfires were sparked by target shooters in the desert. Wasn’t sure this was possible, but evidence indicates fires can be started when bullets strike rocks. At least two shooters reported causing fires while plinking. Future accuracy testing will be done at a local shooting range, where there’s no brush to ignite. I’ll be glad when the rains come again.

After setting up my portable bench and sighting the rifle in, I set targets out at 100 yards and began shooting three-shot groups.

Accuracy was more than satisfactory. Groups averaged from 0.66-inch measured between centers, to slightly over an inch. Four of the five loads produced sub-MOA precision. Not bad from a 7.25-pound sporter with a medium-weight barrel. I used only the 10-shot magazine that came with the rifle. Past experience has shown that 30-round AR-15 magazines are simply too long to be accommodated by standard sandbags.

The Lightning Bolt Adjustable trigger deserves much of the credit for the accuracy the rifle delivered. There was no creep or discernable overtravel—just a crisp, clean letoff. Sandbags and a flat forend provided a solid rest, and the Pentax scope delivered a clear, sharp image.

Recoil isn’t much of a problem when shooting 5.56mm or .223 loads, but a rubber pad at the butt minimizes any rearward motion when the rifle is fired. More importantly, it provides a no-slip surface against your shoulder.

The rifle’s barrel is generously free-floated. This, combined with fluting, allowed the barrel to quickly cool down after firing a dozen or so rounds in rapid succession. Also, the medium-weight barrel sheds heat more quickly than the heavy-barreled varminters I’ve used. When you’re gunning over a populous prairie dog town, shooting can be fast and furious. Rapid cooling can help keep you in the game.

I haven’t yet had the chance to hunt coyotes and foxes with Mossberg’s new MVP rifle. That’s an experience I’m looking forward to. A folding Harris bipod attached to the front sling swivel should provide the rock-steady support needed to zero in on yodel dogs from several hundred yards away. When it’s time to move on to another spot, the rifle’s lightweight mobility will be a real plus.

In the last few years, O.F. Mossberg & Sons has produced a number of innovative, imaginative firearms for both sportsmen and law enforcement agencies. The new MVP rifle is a prime example of the practical, highly useful guns this company has recently introduced. For more information, visit mossberg.com or call 203-230-5300. 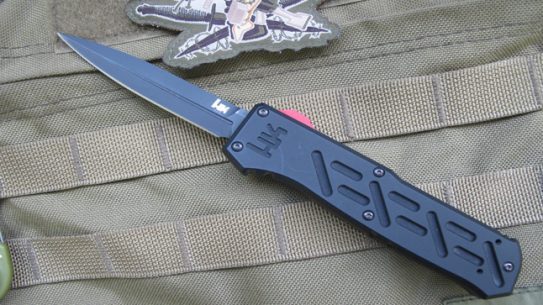