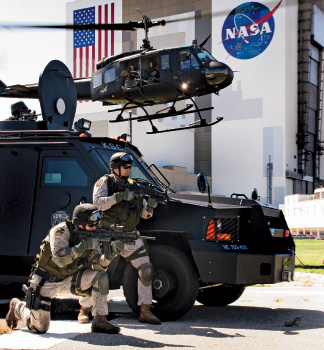 America entered the space race playing catch-up. On the morning of Oct­ober 4, 1957 we were astonished to wake up with the Russian “Sputnik” satellite orbiting over our heads! Russia’s launch of the world’s first artificial moon proved that the Soviets had developed rockets far more powerful than any in the American arsenal. Two months later in response to incredible production pressure—a persistent error-prone situation that was to plague NASA decades later—the launch button was pushed on America’s response to Sputnik, the U.S. Navy’s Vanguard rocket. Scheduled since 1955 to launch a satellite for the International Geophysical Year (1958-9), Vanguard was not ready: It flew four feet and blew up. On 17 March 1958, Vanguard’s TV-4 finally succeeded in placing a “Grapefruit”-type satellite into orbit labeled Vanguard-1, which currently survives in orbit as the oldest human artifact in space. 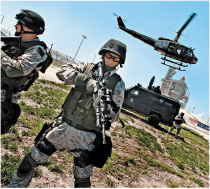 To finally get America into space, the U.S. Army’s Juno (Jupiter-C) launched its Explorer 1 satellite into orbit on Jan. 31, 1958. However, the world perceived our efforts in space to be still a step behind the Russians and America wanted a vastly expanded space program. In response, President Dwight D. Eisenhower created the National Aeronautics and Space Administration (NASA) that came into being on October 1, 1958. In July 1962, NASA established its Launch Operations Center on Florida’s east coast, which is still America’s sole gateway for launching humans into space. In 1963 the series of launch complexes in the area adjacent to Cape Canaveral—Merritt Island—was renamed the John F. Kennedy Space Center to honor the president who put America on the path to the moon. Since the rudimentary V-2, Vanguards and Explorers the Cape has been transformed from scrubland into a major spaceport with launch complexes the length and width of the Cape to support NASA, in addition to commercial and military space activities.

Protecting NASA
The 144,000 acres of KSC (Kennedy Space Center) is co-located on the Merritt Island National Wildlife Refuge, with wetlands and waterways including 25 miles of coastline. About 14,000 NASA and contract workers staff the KSC administrative, research, maintenance and launch facilities on a daily basis. In addition, 2 million visitors come by cars and buses every year, making the KSC Visitor Center a top Florida tourist attraction. What this all means is that KSC has every kind of terrain and issue that any major law enforcement agency encounters, with the added responsibility of protecting some of the highest value assets that America is proud to have. The KSC security police force and in particular the KSC Emergency Response Team (ERT) is well manned, equipped and led to ensure that workers, visitors and America’s unique spaceport is well protected.

The KSC ERT is a full-time, armed response team that has at least five operators and one leader on duty at any time. When not engaged in actual special operations, training or supporting one of the many Space Shuttle Orbiter evolutions that require ERT protection, the officers engage in routine activities that support the site’s security program. In order to fully support all the law enforcement duties that such a complex area requires, each sworn officer has arrest powers with the ability to enforce not only federal statutes, but state and wildlife conservation laws as well. Under the auspices of the NASA Security and Law Enforcement Program, the KSC security police force and ERT also closely work with the FBI and Regional Domestic Security Task Force on specific investigative and intelligence issues.

Built Upon a Select Few
To get on the KSC ERT, one must apply as part of the NASA security force, or outside the agency and be accepted for the in-house ERT training school run by Captain Dan Magetteri. The course is run at NASA’s Federal Law Enforcement Training Academy that has been recently upgraded to include a “rifle-grade” shoot house, a portable, tactical “shoot-back” trailer for cover and concealment drills, automated running targets and a new classroom. These improvements were in addition to the already existing three firearms ranges, “pistol-grade” shoot house with seven rooms and two hallways, obstacle course and rappel tower. The operators selected as the designated snipers are trained at nationally recognized and accredited sniper schools as well as fulfilling all NASA initial and requalification training requirements. Every KSC ERT candidate must pass the physical, shooting and classroom portions of the 88-hour course in order to join the team, with every grade greater than 90%. Even though the candidates who start the school are uniformly experienced, the school begins at a basic level with training that includes the following:

The result is that every team member is fully qualified at every job, so if needed, whoever is first on the scene can immediately evaluate, assess, plan and execute an assault without waiting for assistance. The ERT in-service training curricula include eight hours of S.W.A.T. training per operator per week to maintain proficiency and teamwork.

Sharp Tactics and Weapons
Each operator, including team leaders, must maintain their weapons qualification on all the weapons that KSC ERT uses, which currently include the HK 416 in 5.56×45 NATO as their primary weapon and the 9mm Glock Model 17 as their sidearm. The ERT snipers use the Remington 700 and Armalite AR-10T in 7.62×51 NATO. The semi-auto AR-10T is for precision shooting from moving vehicles like NASA’s Bearcat armored vehicle, boats like the Solid Rocket Booster (SRB) recovery ships, the Liberty Star and Freedom Star, or one of the Huey-II helicopters the ERT uses. The versatile Hueys enable the ERT to rapidly deploy anywhere in their area of responsibility and can be equipped with one or two FNH M-240D’s to provide immediate direct protection against ground or airborne threats to the Orbiter in transit or sitting on the launch pad. In fact, whenever the Shuttle is preparing for launch or being transported on-site, the ERT provides 24/7 protection. This includes the eight-hour trip from the Vehicle Assembly Building (VAB) to pad 39A, the last operable Shuttle launch pad, using the massive 1-mile-per-hour crawler.

Crew Protection
The ERT mission of guarding valuable national assets also includes providing protection for the primary flight crew for Shuttle missions whenever they are on-site or when they leave the facility as part of their NASA duties. When the flight crew suits up and travels to the Orbiter in preparation for launch, the motorcade includes an armed and armored ERT escort. In addition, if there is an emergency landing or an incident with the Orbiter, the KSC ERT is responsible for the immediate securing of the scene and protection of the astronauts. The ERT is designated and equipped to respond to certain launch emergency scenarios including entry of the launch tower to extract the crew. 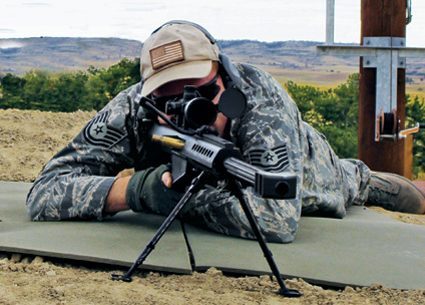 America entered the space race playing catch-up. On the morning of Oct­ober 4, 1957…