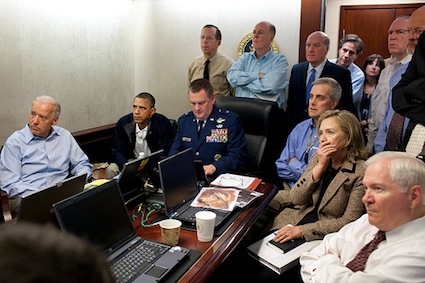 W]e were able to monitor on a real-time basis the progress of the operation from its commencement to its time on target, to the extraction of the remains, and to then the egress off of the target,” Obama’s Homeland Security and Counter-terrorism Advisor John Brennan told the press at a White House briefing Monday.

Administration officials refused to detail exactly what they meant by that other than to say there were some sort of visuals and other information that allowed officials to keep track of the situation continually.

“It was probably one of the most anxiety-filled periods of time, I think, in the lives of the people who were assembled here yesterday. The minutes passed like days.”

Tension and silence filled the room.

Obama remained calm, sources say, even as those long-awaited words were spoken. There wasn’t an “ah-ha” moment, Brennan says, when everyone realized spontaneously that the man killed was indeed bin Laden. The identification process was multi-faceted.