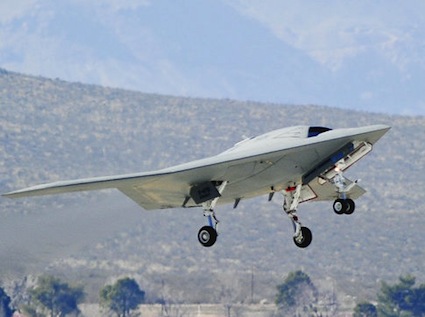 This image released by US defense contractor Northrop Grumman shows the test flight of the unmanned X-47B jet on February 4, 2011, at Edwards Air Force Base in California. The X-47B jet, which looks like a smaller version of the B-2 stealth bomber, stayed in the air for 29 minutes and climbed to 5,000 feet in a test flight, according to Northrop Grumman and the US Navy. Military leaders see the plane as part of a new generation of drones that would be able to evade radar and fly at much faster speeds than the current fleet of propeller-driven Predators and Reapers used in the war in Afghanistan. AFP PHOTO/NORTHROP GRUMMAN/HO.


An unmanned, bat-winged stealth bomber made its first demo flight in California, marking the first step in the Navy’s development of a new generation of killer drones.

The experimental warplane, named the X-47B, took off from Edwards Air Force base, shot to 5,000 feet and flew a racetrack pattern over a dry lakebed during the 29-minute demo flight on Friday, the Navy said in a statement.

“Today we got a glimpse towards the future as the Navy’s first-ever tailless, jet-powered unmanned aircraft took to the skies,” said Capt. Jaime Engdahl, the program manager for the plane, said in a statement.

Military leaders see the plane as a major shift from the current fleet of robotic aircraft.

Combat drones are usually controlled remotely by human pilots, but the X-47B can carry out extended missions controlled by a computer and is designed to fly faster and farther than existing jets, like the Predators and Reapers used in Afghanistan.

It’s also the first drone capable of taking off and landing aboard an aircraft carrier in the ocean.

Slightly smaller than the B-2 stealth bomber, the X-47B carries laser-guided bombs and can fly at 40,000 feet at speeds faster than 500 miles per hour.

Friday’s test flight was just a taste of the fighter’s capability.

The Navy and the plane’s designer, Northrop Grumman, have planned 50 more test flights throughout the year.

The first plane will complete testing in late 2011, and a second will begin testing shortly thereafter, the Navy said.