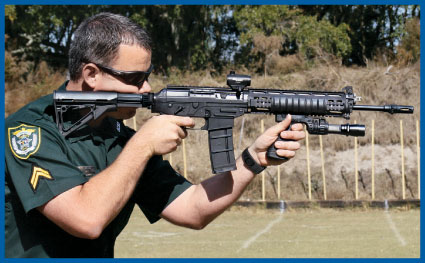 Most of us have a favorite gun, but if we focus on it to the virtual exclusion of others in the armory available to us, we end up like the kind of incomplete students who earn an A+ in our favorite subject, but only a C or perhaps even an “Incomplete” grade in the rest of the arms curriculum. Each firearm has its place and we never know when we’ll need the particular attributes of a given police weapon. Consider the following actual cases.

Patrol Rifle
The patrol rifle gives us firepower, distance, precision, barrier penetration and superior stopping power. It also affords fairly high hit probability when fired in the stress of extreme danger situations. In Case One recently in Colorado, a disgruntled employee showed up at the ski resort where he worked, dressed in black and armed with a semiautomatic pistol. He murdered his supervisor with two shots.

The first responding officer, a 46-year-old deputy sheriff, was racing to the scene when he spotted the suspect’s vehicle and gave chase. The gunman came to a stop and opened fire from the window of his vehicle. However, the well-prepared deputy bailed out to take cover behind his patrol SUV and deployed his AR-15 patrol rifle. His excellent use of cover kept the killer’s bullets away from him as the deputy, a SWAT team member and firearms instructor, returned fire. He killed his assailant and survived.

Good training, personal discipline, excellent strategy and tactics and marksmanship skill under fire all combined to keep the deputy alive. His valorous performance may well have kept further victims from being murdered.

Patrol Shotgun
Famous for its raw power as a “man stopper,” the shotgun has been a staple in the law enforcement armory since the first village watchman loaded his blunderbuss not long after the landing of the Mayflower. In Case Two in the Midwest, a crazed gunman began shooting people in an entertainment center. The first responding officer deployed his shotgun as he exited his vehicle and made his way inside amongst a hysterical, highly mobile crowd that was trying to escape the gunfire. Seeing the suspect about to commit another murder, the officer carefully aimed and fired.

He instantly killed the gunman, saving the life of his immediate intended victim and probably many more. Certainly, the devastating power of the 12 gauge helped. But the credit really goes to the officer who pressed the trigger. His actions exemplified confidence, coolness under fire, the ability to think quickly and, of course, skill at arms.

The Service Pistol
The service handgun is the police officer’s primary weapon, the one that is always accessible to him or her when on patrol. Officer survival authority Brian McKenna recently documented an incident in the South that I’ll call Case Three. A routine traffic stop went bad and the suspect ambushed the officer, shooting him in the chest with a 9mm pistol. The bullet stopped on the officer’s body armor and the cop went for his own pistol, a department-issue Glock 22.

Early in the gunfight, the officer also sustained arm and leg wounds. Nonetheless, he was able to return effective fire and – amazed to see his antagonist still on his feet, armed and dangerous – was able to reload his pistol and continue a sustained stream of 180-grain .40 caliber bullets into his antagonist. When the would-be cop-killer at last slumped and died, he had been hit 22 times, 17 of them in the center mass area. The heroic officer has reportedly recovered from his wounds.

Under these circumstances, the officer had no time to get back to his patrol car for a long gun and his quick access to the holstered duty pistol saved his life. So did his powerful determination and ability to stay in the fight, following his training to deliver a drumbeat of accurate hits that finished his opponent.

Backup/Off-Duty Weaponry
A handgun that can be discreetly concealed 24/7 will be there for the officer when the duty pistol is in the locker, in the home lockbox, or out of reach in a muddy ditch where it was knocked in a fight with a cop-killer. Consider Case Four, which (Please turn to page )

occurred recently in the Northwest. The perp said later he just wanted to shoot “a cop” and happened to know where one lived. He came to the door of a local deputy’s home and when the deputy answered the door, came up with a handgun and opened fire on him.

This deputy, however, was armed off-duty. He reflexively drew and returned a hail of fire that dropped his would-be murderer. The deputy and his wife calmly called Dispatch to state that he had been shot in the chest and arm and the perpetrator was down. Good training and cold courage saved that wounded deputy’s life…and so did the strong sense of preparedness that kept him always armed, even off-duty – at home.

Final Notes
Four officers. Four different types of police weapons. Four victories, two of them by brave lawmen who were seriously wounded by surprise at the opening of their fights. Three would-be cop-killers dead and the fourth shot to pieces, neutralized, and in custody. In all four cases, the involved policemen were “the first responding officers.” We’ll never know how many additional lives were saved by their ability to neutralize those four homicidal perpetrators.

The guns these officers used were different. What each case had in common was an LEO (law enforcement officer) who was mentally and physically prepared, skilled and trained. Competence breeds confidence and these four lawmen applied their skill with the various weapons, combined with valor and determination.

We at Guns & Weapons for Law Enforcement salute them all. 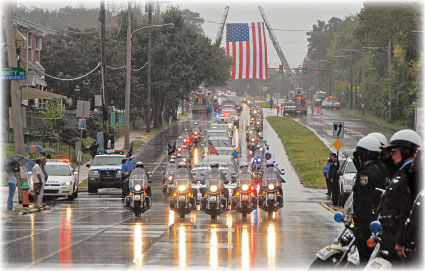 Most of us have a favorite gun, but if we focus on it to…