The new AABs are among seven brigade-size elements whose upcoming deployments were announced today. One brigade is going to Kuwait and two others to Afghanistan to replace redeploying forces, Pentagon spokesman Bryan Whitman told reporters.

Unlike traditional brigade combat teams, the AABs will focus less on combat operations and more on advising, assisting and developing capabilities within the Iraqi security forces, he explained. However, they also will conduct coordinated counterterrorism missions and protect ongoing civilian and military efforts within Iraq.

AABs will be about the size of a standard brigade combat team, but will include more field-grade officers serving as advisors, and more engineering, military police, civil affairs, transportation and other capabilities to support the training and mentoring mission, Whitman said.

In addition to working as partners with Iraqi security forces, the AABs will support the State Department’s provincial reconstruction teams, officials said.

Their predeployment training is expected to differ considerably from that of standard brigades, Whitman said. In addition to standard combat training, they will undergo scenario-based training and mission-readiness exercises designed to prepare them for the complex challenges they will encounter in Iraq, officials said.

Some overlap will occur as the redeploying elements conduct “left seat, right seat” training for their replacements, Whitman said. However, the slight increase will be temporary, with the deploying forces not expected to exceed the 128,000 troops currently in Iraq.

Plans remain on track to maintain those levels through the Iraqi elections, and then to gradually draw down the force to between 30,000 and 50,000 by Aug. 31, 2010, Whitman said.

Defense officials also announced two BCTs to replace brigades redeploying from Afghanistan. The 101st Airborne Division’s 3rd BCT from Fort Campbell, Ky., and the 173rd Airborne Brigade based in Vicenza, Italy, were alerted that they will be part of the NATO-led International Security Assistance Force.

Both brigades will conduct the full spectrum of combat operations.

The 3rd BCT is expected to deploy with about 3,800 troops late this fall, officials said. The 173rd BCT will deploy this winter with about 3,700 soldiers.

Whitman emphasized that today’s announcements represent regular troop replacement and are not part of the buildup under way in Afghanistan. About 57,000 U.S. troops are deployed to Afghanistan, a number to increase to about 68,000 to support the new Pakistan-Afghanistan strategy.

However, these plans are subject to change based on conditions on the ground and an assessment Army Gen. Stanley A. McChrystal, commander of NATO’s International Security Assistance Force and U.S. Forces Afghanistan, is conducting, Whitman said.

Meanwhile, the Florida Army National Guard’s 53rd BCT received notification that it will deploy to Kuwait to replace redeploying soldiers there.

The Defense Department initially announced in December 2007 that the brigade would deploy to Afghanistan, but quickly reassigned it to the security mission in Kuwait.

Now, when it deploys to Kuwait between late fall and early 2010, the 56th BCT will provide base defense and route security in Iraq and Kuwait, assuring freedom of movement for coalition forces supporting Operation Iraqi Freedom, Whitman said. 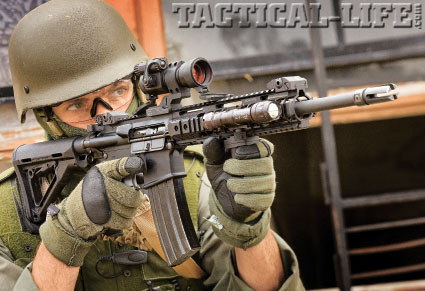