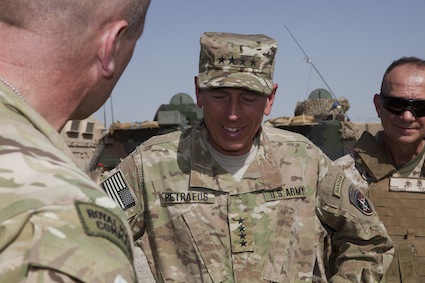 U.S. General David Petraeus, Washington’s new intelligence chief, handed over command of U.S. and NATO-led troops in Afghanistan on Monday, a day after a tentative start was made to a gradual process of transferring security to Afghan forces.

Petraeus, credited with reversing a spiral toward civil war in Iraq, took over in Afghanistan on July 4, 2010, and is leaving the military to take over as director of the Central Intelligence Agency as part of a wider shake-up of senior U.S. security officials.

Petraeus oversaw a “surge” of 30,000 extra U.S. forces which helped stop the momentum of a growing insurgency, especially in the Taliban heartland in the south.

However, despite gains in violent southern provinces during Petraeus’ year in charge, the Taliban-led insurgency is still far from quelled.