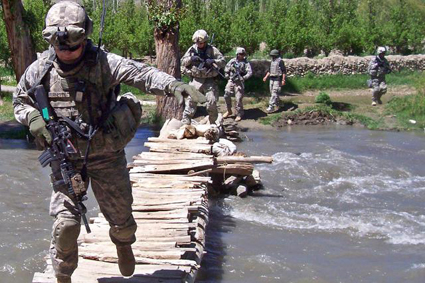 ABOARD A U.S. MILITARY AIRCRAFT (June 11, 2009) — Defense Secretary Robert M. Gates said a new “intermediate” command set for Afghanistan will allow the commander to concentrate on day-to-day tactical events across the country.

Gates spoke to reporters traveling with him aboard an E-4B aircraft taking him to NATO meetings in Brussels after leaving Regional Command South meetings in Maastricht, Netherlands.

If approved for the post, Rodriguez would serve under the command of Army Lt. Gen. Stanley McChrystal, whom the Senate confirmed yesterday to receive his fourth star and take command of ISAF and U.S. forces in Afghanistan. Officials expect him to take command June 13.

“The problem we needed to address is [that] the commander of ISAF under the current arrangement has far too many responsibilities to be able to guide the tactical battle on a day-to-day basis across the country,” Gates said. “The plan is for General McChrystal and the [British] deputy commander – Royal Marines Lt. Gen. Jim Dutton – to have more of a strategic role in looking across the country at a more elevated level in terms of cooperation between civil and military efforts.”

The command as proposed would be an intermediate headquarters under the ISAF commander that would focus on the tactical situation. “It would be very much like the corps commander in Iraq under the Multinational Force Iraq commander,” Gates said. “So you’ve got somebody with the overarching responsibility for strategy, but somebody working the day-to-day battle.”

The secretary said the proposal has broad support across NATO, with the North Atlantic Council – the alliance’s top political arm – giving the unofficial go-ahead. “This is an agreement in principle,” Gates said.

Gates said he has told McChrystal to develop a detailed implementation plan for the new command within 60 days. Rodriguez will deploy to Afghanistan soon and will serve as deputy commander of U.S. Forces Afghanistan, until the plan is approved.

“Immediately on the establishment of this ISAF headquarters, he will take off the U.S. hat and put on an ISAF hat, and his only role will be in an alliance role,” Gates said.

The secretary said he hopes the plan will be adopted before August.

In Maastricht, Gates and other defense ministers with forces in Afghanistan’s Regional Command South area of operations received a briefing from Dutch army Maj. Gen. Mart de Kruif, who commands those forces. The secretary said the briefing was “realistic, but encouraging,” and that the Dutch general detailed how the command will use the additional American troops now being deployed to the region.

“He clearly has specific plans in mind to use the additional forces in a way to get maximum effect,” the secretary said.

The ministers also spoke about coordination of provincial reconstruction teams in the south and the need for a civil-military cell in the headquarters to look at the situation across Regional Command South.

The defense ministers also stressed the importance that civilian agencies bring to the region, Gates said, noting that he encouraged his counterparts to send more civilian experts to the area. The United States has sent 100 civilians – mostly from the State Department, the U.S. Agency for International Development and the Agriculture Department – to the region, and they have been absorbed into existing teams.

Gates said the ministers are pleased with the growing cooperation among Afghanistan, Pakistan and ISAF. The creation of border coordination centers is a concrete example of this cooperation. “Everyone is very supportive of the Pakistani operations in Swat and elsewhere,” Gates said. “But they are also very mindful of Pakistani sovereignty and the need to work with them as a partner.”

The additional troops are coming in well before the Afghan elections in August. Gates said NATO must shift the momentum in the fight against the Taliban and other terror groups in Afghanistan.

“It’s my view – and, I think, the president’s – that if we can show we are making progress, if we’re headed in the right direction, then the American people and the Congress will sustain this effort,” he said. “But if in a year or so, it appears that we are in a stalemate and we’re taking even more casualties, then patience will wear thin pretty soon.”

The same is true for the NATO allies, he said. “But I think we are putting all the assets in place for the first time to have a reasonable prospect for success to shift that momentum,” Gates said.