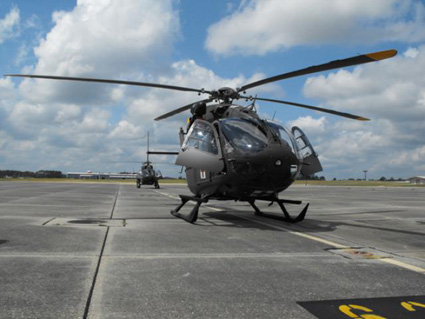 FORT POLK, La. — The terrain and strategies of wars may change, but some things remain the same. An injured Soldier on the battlefield still feels pain. He still smells blood and hears gunfire.

As the medics patch him up and move him to an area where a helicopter can reach him, he can still feel the awkwardness of laying on a stretcher being carried by four running people in full battle-rattle. As the helicopter approaches, he can hear its blades cutting through the air and feel the sting of dirt on his skin from the hard wind they create.

The name of the game now is speed. Pilots and medics find themselves in a race with death, and the sooner they can get a patient to a hospital, the better the chances of survival. This was the reason for using helicopters as air ambulances in the first place.

While airborne medical evacuations were rare during World War II, they became more common during the Korean War. This was a case of necessity being the mother of invention — the landscape in Korea was rugged and the roads often impassible. Tactical ambulance vehicles simply couldn’t traverse much of the terrain, and when they could, it wasn’t a pleasant ride for the wounded. Some would go into shock from being banged around in the vehicle, and the time lost navigating unpredictable roads cost lives. This led to the medical adage: “A man dies in a period of time, not over a distance of miles.”

Enter the medevac helicopter. Dubbed “angels of mercy” for evacuating more than 18,000 United Nations casualties during the Korean War, many lives were saved thanks to a short, high-speed trip in a whirlybird to awaiting medical assistance.

Through the years, technology has evolved and things have changed in medicine and avionics. A recent upgrade to the Army’s air fleet reflects some of the most advanced technological evolution around, and the bottom line is that it will save lives.

Maj. Daniel Moore, commander, USAAAD, and his flight crew made the trip to Columbus, Miss., Sept. 8-10, to pick up the aircraft and fly them to their new home at Fort Polk.

Moore said the new birds are faster than the UH1 Iroquois helicopters, or Hueys as they are called, which are being phased out of Fort Polk’s fleet.

“It travels 20-30 knots faster than the Huey and it’s more fuel efficient,” said Moore. “Over the next two years, we are transitioning to all LUHs to replace the Hueys. The unit is (changing) from being a Huey Detachment to being an LUH company.”

The LUH is also a lighter aircraft at 7,900 pounds (versus the 19,000-pound Huey) and thus more fuel-efficient. Moore had high praise for the LUH following his flight from Columbus. “The aircraft is great. It’s an all-weather helicopter with autopilot, a glass cockpit and great instrumentation — such an advanced avionic package makes you feel very comfortable flying,” said Moore. “These are configured for medevac operations, so it has racks for medical equipment such as monitors and oxygen, and litter racks for two patients.”

The aircraft also has room for one medical attendant, and increased lighting in and around the aircraft to aid in low visibility conditions.

Moore said patients are loaded through the rear cargo door, which is easier than taking them through the side of the aircraft, and hoists have been installed for aerial extractions.

As the detachment awaits the last few LUHs to join their fleet (by early 2010, there will be six LUHs and three Hueys; by the summer 2011, the last two LUHs are due to arrive and the Hueys will be gone), Moore said his unit has the distinction of having both the oldest and newest helicopters at Fort Polk.

“We have the legacy 1969 UH1 Huey, the oldest (operational helicopter) out here (at Polk Airfield), and now we have three LUHs that were probably put together this month,” said Moore. “So I’ve got a Huey from ’69 and an LUH from three weeks ago. That’s a unique situation.”

FORT POLK, La. -- The terrain and strategies of wars may change, but some…