Not only is PTR-91, Inc. manufacturing varieties of their HK-91 clone, the company now manufactures a Heckler & Koch-style carbine that never got beyond prototype stage in Germany – the PTR-32, an improved version of the HK32 that was designed in the early 1960s.

One of the primary military rifles of the mid-20th Century was the Heckler & Koch G-3, a German abbreviation for Gewehr (rifle) Model 3. The G-3 was select fire, i.e. capable of full automatic fire, but a semi-automatic version was produced and marketed as the HK-91. Although an excellent rifle, the HK-91 was expensive and relatively few were imported prior to 1989, when Heckler & Koch ceased importation. Although there has been considerable demand for HK to resume production of the HK-91, the HK-91 tooling and technical data package was sold to the Portuguese government. HK officially stated that it could not justify resuming HK-91 production. JLD Enterprises — now officially known as PTR-91, took up the slack, purchased the HK-91 tooling from the Portuguese government and began making HK-91 rifles under the name PTR-91 that are every bit as good as the originals because they are manufactured to strict original German military standards using HK tooling. The PTR-91 was so successful that the company changed its name to PTR-91, Inc.

Strict adherence to original tolerances allow for the PTR-32’s effortless disassembly and reassembly.

Since the original HK-91 rifles and carbines ceased to be manufactured, production engineering has evolved and improved. Today, computer numerical controlled (CNC) machinery ensures that exacting high quality standards can be achieved at relatively low cost. So even though HK tooling is used to manufacture PTR-91 rifles and carbines, these new rifles not only equal the originals, but actually improve on them.

Rails at three, six and nine o’clock on the handguard readily accept any number of accessories.

PTR-32 History
Not only is PTR-91, Inc. manufacturing never before available varieties of their HK-91 clone, the company now manufactures a HK carbine that never got beyond prototype stage in Germany – the PTR-32, an improved version of the HK32 that was designed in the early 1960s. The HK32 history, while brief, is interesting in itself. The success of the G3 caused many foreign governments to inquire as to whether HK could manufacture G3/HK-91 type rifles in calibers other than 7.62x51mm. Perhaps not surprisingly, the alternate caliber most in demand was the Soviet 7.62x39mm. With that in mind, HK engineers set about designing a new rifle, derived from the G3, but chambered in 7.62x39mm. 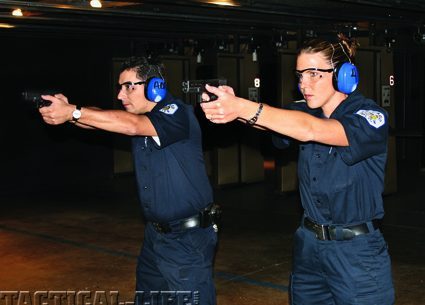 Not only is PTR-91, Inc. manufacturing varieties of their HK-91 clone, the company now…