by Tactical-Life.com
in Guns, Rifles
0

We get our hands on the new M&P15-22P before anyone else for a sneak preview. See the story in the next issue of Combat Handguns! 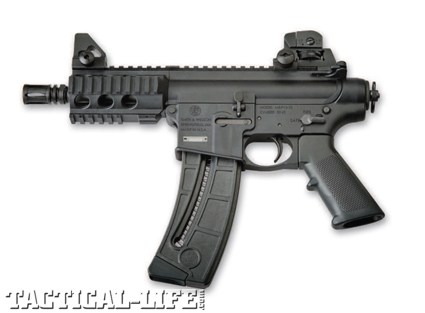 Smith & Wesson announce company a new model to the Military & Police (M&P) Series of firearms with the introduction of a semi-automatic pistol based on the popular M&P15-22 rifle – the M&P15-22P pistol. Engineered on a dedicated .22 LR tactical platform, the M&P15-22P offers shooters reduced size and weight while retaining the same operating features and versatility of the full-length tactical rifle.

Built on a high strength polymer upper and lower receiver, the M&P15-22P features a 6-inch carbon steel barrel with an overall length of 15 inches. The new pistol operates on a conventional blow back semi-automatic action and is standard with a 25-round detachable magazine. The M&P15-22P has a barrel twist of 1 in 15 inches and has been fitted with an A1-style flash hider. With an unloaded weight of 51 ounces, the tactical sport pistol can be enjoyed by shooting enthusiasts of all ages offering limited recoil and economical ammunition. To aid in sight alignment, the M&P15-22P is standard with a removable A2-style front post sight and an adjustable A2-style rear sight. The standard sights on the M&P15-22P can be easily removed, providing owners the flexibility to mount a myriad of optics and sighting devices.

The M&P15-22P shares other common design features with the full-length tactical rifle including an A3-style flat top upper receiver with quad-rail handguard along with a single stage trigger. The new pistol also features a traditional AR-15 style magazine release, bolt catch and a two-position receiver mounted safety. By staying true to the 1913 Mil. Std. design, the pistol will accept after-market rail accessories along with most standard pistol grips and trigger systems.

“With the availability of the new M&P15-22P, consumers have the opportunity to own a unique, multipurpose tactical sport pistol,” said Tom Kelly, Vice President of Marketing for Smith & Wesson. “By condensing the M&P15-22 platform, we are essentially offering shooters the best of both worlds. Now target shooters, small game hunters or any individuals looking to add more excitement to their recreational shooting can have the compact feel of a semi-automatic pistol with all the adaptability and versatility of the full-size M&P15 tactical rifle.” Smith-wesson.com. 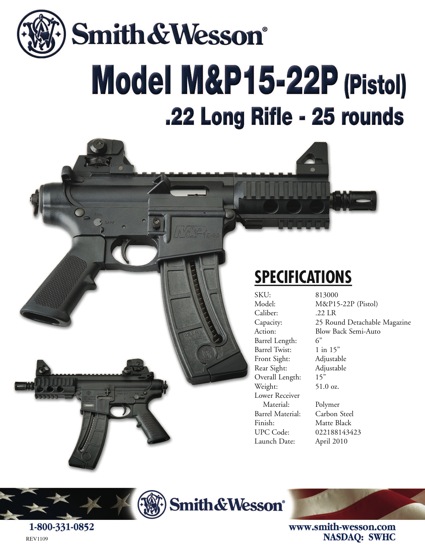