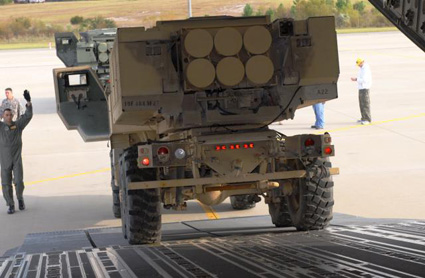 FORT BRAGG, N.C. — Soldiers with 3rd Battalion, 27th Field Artillery (HIMARS), drove their High Mobility Artillery Rocket System out the rear of an Air Force C-17 Globemaster III at Pope Air Force Base, N.C., Oct. 22, with a new advancement that will get them into the fight faster.

The ‘Hot Panel’ program allows the HIMARS to link into an aircraft’s GPS and track itself in the air, anywhere in the world. The advancement will allow Soldiers to switch between a land mode and an air mode so the vehicle tracking system can find its location and its targets rapidly when it exits an airplane.

“It allows you to start up the launcher in flight and roll off the airplane ready to shoot,” said Steve Coventry, system and test engineer with Lockheed Martin.

Engineers from Lockheed Martin and Redstone Arsenal, Ala., who are working together on the project, came to Fort Bragg and Pope Air Force Base to gather data through flight tests using the HIMARS vehicles and a C-17.

Scott Kalfus, Lockheed Martin, missiles and fire control, system and test engineer said all the vibrations from the flight will be recorded on specialized equipment and used to develop the right programming for the HIMARS.

“The tests will allow us to correlate the maneuvers to the data the machines are collecting,” Kalfus said.

The flight plan included take off, ground fire avoidance measures, approach and landing. They engineers working on the project also implemented a program that will sense movement and switch the navigational unit between air mode and land mode.

The flights were used to verify the data from previous flights and to confirm the changes already implemented were working correctly.

“We had to make changes in the position navigation unit,” Coventry said. “It’s designed for ground vehicles. We had to make several changes to the software to handle the greatly increased speeds of a C-17 and make allowances for avoidance maneuvers. It’s very stressful on the navigation unit to maintain accuracy during flight.”

“We did flight tests before and collected data,” he continued. “We made changes to the software. Now we’re going to test those changes. The fire control system had to tell the navigation unit to go into air mode. The computer had to tell it there are no odometer inputs. It has to go strictly off the inertial movement unit and the GPS.”

According to James Cyr, precision fires project office at Redstone Arsenal, Ala., the data collected from this round of test flights will be computed and used to develop the final version of the software due out in 2011.

The plan is to make the system as simple as possible for Soldiers to allow them to get into the fight quicker.

“We want this to be as user friendly as possible, so we want to make it as automatic as we can,” Coventry added. “We have to provide a link between the GPS in the aircraft and the launcher. Right now it is a physical connection. In the future it will be a wireless connection. GPS will broadcast inside the aircraft. “ 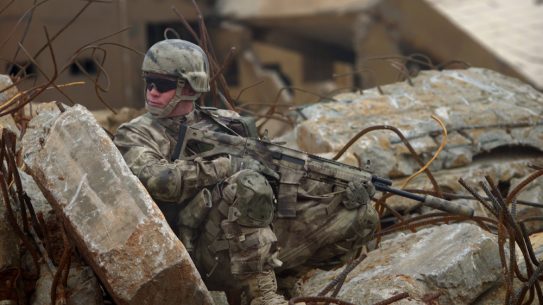