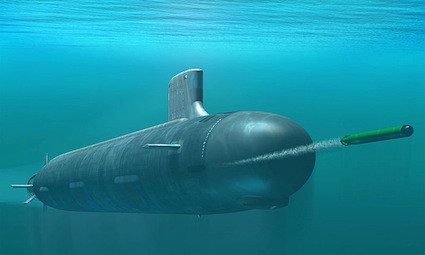 This conceptual drawing shows the new Virginia-class attack submarine now under construction at General Dynamics Electric Boat in Groton, Conn., and Northrop Grumman Newport News Shipbuilding in Newport News, Va. The first ship of this class, USS Virginia (SSN 774) is scheduled to be delivered to the U.S. Navy in 2004. U.S. D.O.D. graphic by Ron Stern. (RELEASED)

The next Virginia-class submarine will be named the USS Delaware and Jill Biden will be the sponsor, the Navy announced today.

Secretary of the Navy Ray Mabus chose the name in honor of the first state in the union and its more than two centuries of naval heritage.

“I chose the name Delaware to honor the long-standing relationship between the Navy and our nation’s first state,” Mabus said in a statement. “It has been too long since there has been a USS Delaware in the fleet and this submarine will remind future deployed service members and state residents of their strong ties and many shared values for decades to come.”