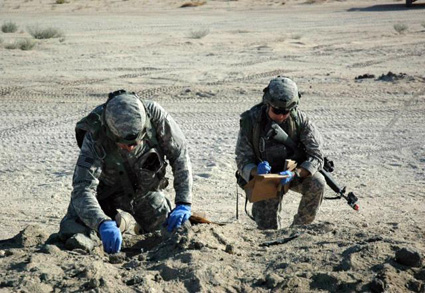 WASHINGTON — Servicemembers who participated in the first state-side training program for joint counter-IED teams have just arrived in Afghanistan for a year-long assignment.

The Tidal Sun pilot program trained servicemembers to work as part of counter-IED teams to gather information and evidence from improvised explosive device event sites — locations where IEDs have exploded or were discovered — and then send that information to higher headquarters for further analysis.

“The goal of these teams is to be able to … learn about who might have built and placed the device and any other tell-tale things,” said Marine Corps Col. Christopher Mahoney, chief of staff of the JIEDDO JCOE. “That will enable us to go back in the process and prevent similar devices from similar people under similar circumstances from being emplaced in the first place.

“The long and short of it is, we don’t want the explosion to ever happen. These teams are going to be a great enabler to do that.”

Mahoney said that as part of Tidal Sun, both American servicemembers and NATO partners were trained to gather physical evidence from a site, such as pieces of bombs, circuit boards, or evidence of explosives, to analyze it and to then send it off for further analysis. Instructors for Tidal Sun included experienced agents from Alcohol, Tobacco and Firearms.

“Part of the power potential of this program is collaborating with our NATO allies and inter-agency partners,” Mahoney said. “And using the immense experience offered by Alcohol, Tobacco and Firearms agents in our training program, for example, gives us a perspective and a depth of knowledge that the Department of Defense simply does not have. This type of partnering is a major key to success, no question.”

New information discovered about the tactics of the networks of individuals that planted the IEDs can then be sent downstream to help those in theater better discover IEDs before they explode and cause injury or death.

While counter-IED teams already exist, are currently serving in both Iraq and Afghanistan, the teams have until now been assembled in theater from servicemembers who sometimes trained for the task of tactical site exploitation on the job, in theater. This is the first time those bound to work on a counter-IED team have been gathered together stateside, before deployment, and formally trained for the job they would perform in theater, said Command Sgt. Maj. Todd Burnett, JIEDDO.

“We brought them all together and kind of put them in a team environment before they go into theater,” Burnett said. “This time we wanted to create a program where we bring them together in a training environment and teach them the stuff — to do tactical site exploitation, to do finger printing, to exploit a site where there’s been an IED event.”

The counter-IED teams are made up of members from all services: Army, Marine Corps, Navy and Air Force. Having servicemembers work together in a training environment prior to deployment means they’ll be better able to work together once in theater, Burnett said.

Burnett said JEIDDO leadership was pleased with the way training played out as part of Tidal Sun.

“This was a pilot program, we liked how it worked, so that’s what we’ll do — hence forth we’ll bring them all together,” he said.

In Afghanistan, Burnett said, the counter-IED teams will be officially assigned to Task Force Paladin, the counter-IED command in that theater. But the individuals who attended the pilot iteration of the training conducted at Fort Irwin will actually be attached to and will serve units within the 5th Stryker Brigade, 2nd Infantry Division — which is already deployed into theater.