0
SHARES
1
VIEWS
Share on FacebookShare on Twitter
A mock-up of the X2 military variant, dubbed the S-97 Raider (left), is compared to a photo of the Eurocopter X3 in flight (below). One of the Eurocopter X3’s propellers is visible on a stub wing on the side of the fuselage. 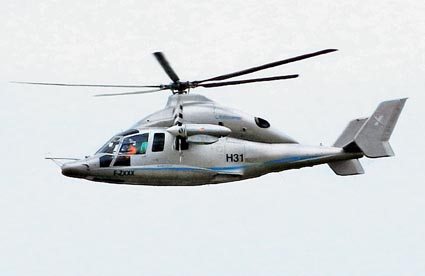 Nearly three years ago, an odd-looking rotorcraft lifted off the runway near the Sikorsky Rapid Protoyping and Military Derivatives Completion Center in Horseheads, New York. The test helicopter’s first 30-minute flight was modest, involving low hover, forward flight and a hover turn, but it had far-reaching implications for military and civil rotary-wing flight. Subsequent flight tests demonstrated how important these implications can be.

The Sikorsky X2 is an experimental single-engine compound helicopter with coaxial rotors. In English, this means that the X2 derives lift from two large counter-rotating main rotors and propulsion from a propeller that pushes the craft in forward flight. This array seems bewildering, but the engineering has a long, proven heritage, and Sikorsky has brought decades of research and development experience to the task: the S-69/XH-59A Advancing Blade Concept Demonstrator that successfully combines a coaxial rotor and auxiliary propulsion to generate high speeds; the Cypher UAV that applies fly-by-wire flight controls to coaxial rotors; and the RAH-66 Comanche’s composite rotors and advanced transmission design. Sikorsky did not invent these technologies, but they have improved them. 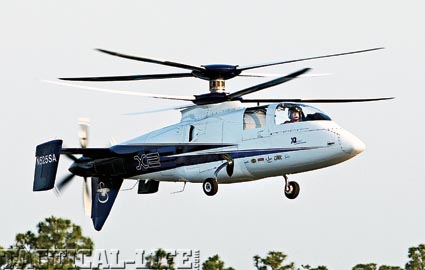 Helicopter Heritage
Counter-rotating main rotors were first flown in 1935 on the Bréguet Dorand Gyroplane Laboratoire. The Russian’s Kamov Design Bureau has produced at least nine coaxial helicopters for military and civil service—tandem or intermeshing rotor designs are similar but operate with separate rotor hubs instead of one. Although the coaxial rotor design is complex, counter-rotating rotors have several important operational advantages. Most importantly, counter-rotating main rotors translate the helicopter’s total engine power into lift, and eliminate the need for anti-torque tail rotors. Counter-rotating rotors eliminate high-frequency vibrations, as well as reduce medium-frequency vibrations, retreating rotor-blade stalls and problems related to settling with power (when a helicopter descends more quickly than the air that’s pushed down by the rotors).