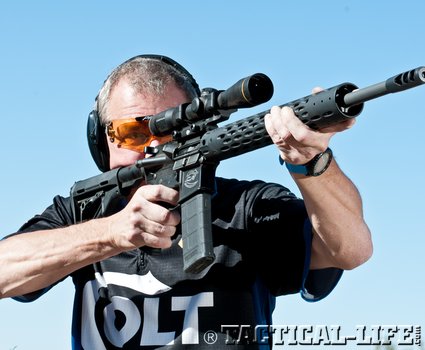 On October 23 and 24, Colt gathered a handful of gunwriters at Gunsite Academy to unveil the new M45A1 pistol, the new .380 Mustang Pocketlite as well as a line of AR-15 rifles designed for 3-Gun competition. Gunsite’s plethora of ranges, a generous supply of ammo supplied by Black Hills Ammunition and holsters supplied by Galco provided us with everything needed to wring out these new Colts. 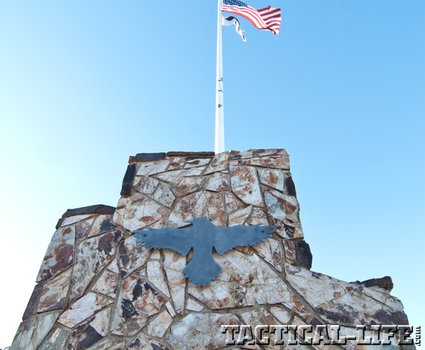 Colt had announced winning the contract for the M45A1 just prior to the event and it generated a tremendous amount of interest among the writers. The weapon features a National Match barrel, Picatinny rail dust cover, Novak night sights, ambidextrous thumb safeties, aggressively textured G10 grip panels and a dual recoil spring system designed to reduce recoil and prevent frame battering. The pistol is covered with a desert tan Cerakote finish. Colt’s Custom shop will be building identical guns for consumer sales, and those guns should start shipping soon. 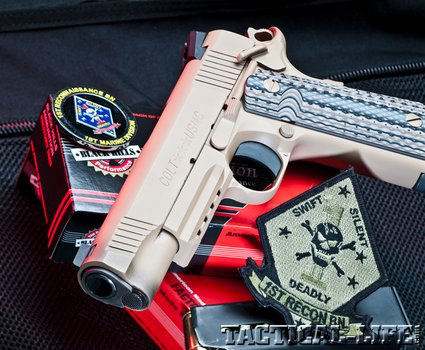 We had a chance to shoot the M45A1 on a static range at paper targets as well as some man-on-man competition between writers on the steel range. All were impressed with the pistol’s shootability, accuracy and reliability. Of the four guns on the range, I did not see any of them choke during our session. 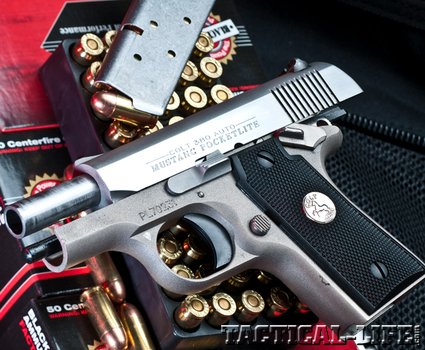 Colt stopped production of their little .380 Mustang Pocketlite in the 1990s due in part to poor sales. But, recent interest in concealed carry, as well as competition from other manufacturers, forced Colt to reintroduce the gun with some improvements. The new Mustang Pocketlite uses a frame, slide and barrel machined from bar stock rather than cast like the original parts. Manufactured with tighter tolerances, the new guns are remarkably accurate and reliable.

I fired a considerable number of rounds from one of the test samples and came away very impressed. It was a fun gun to shoot in the man-on-man competition, and Galco’s Stinger holster made an ideal concealed carry platform to perform unhindered presentations from. 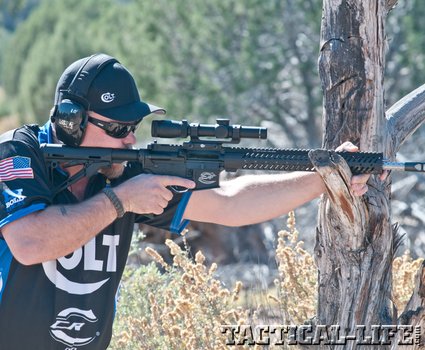 Three-Gun competition is the fastest growing of all shooting sports, and it was with a great deal of excitement that I viewed the new Colt Competition Rifles. Built by Bold Ideas in Canby, Oregon, and fully licensed and authorized by Colt, these new AR-15 rifles possess all of the features that savvy 3-Gunners are looking for. Models vary by handguard style, stocks, barrels and muzzle brakes. All guns have match triggers and come with an accuracy guarantee of a 1-inch-or-less, three-shot group at 100 yards. Leupold is currently working with Colt Competition Rifles to develop a line of optics best suited for 3-Gun shooting.
Colt Competition is also building a .308 semi-auto rifle that will be available with a couple of different barrel lengths and stock options. These rifles will also feature an adjustable gas block to keep the gun running while it is dirty or with substandard ammo. These rifles also come with a 1-inch accuracy guarantee and use 20-round Magpul’s .308 PMAGs.

Colt also introduced a precision .308 bolt gun built by Cooper Arms to Colt’s specifications. The M2012 features an AR-style, free-float forend, metal action chassis, fully adjustable buttstock and a heavy, 22-inch stainless barrel with 1-in-10-inch rifling. Its 13-pound weight is effective in soaking up recoil, and its Timney trigger was set at a crisp 3-pound pull. Our test sample had a single-stack, five-round magazine. 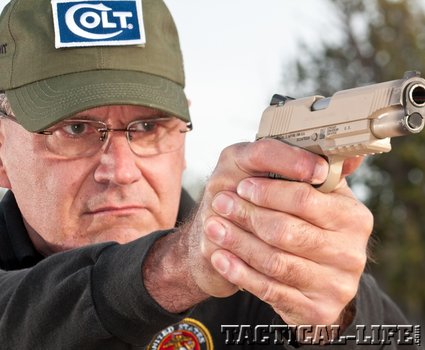 Despite stiff winds, we were able to achieve hits on targets set out at 400, 500 and 600 yards with both the semi-autos and bolt gun. It’s refreshing to see Colt developing products their customers are looking for. By forming strategic partnerships with established industry leaders, Colt assures customers are getting cutting-edge products. Colt’s lineup will continue to grow—look for exciting new guns in the future! For more information, visit coltsmfg.com or call 800-962-2658.