0
SHARES
5
VIEWS
Share on FacebookShare on Twitter
It is 2013, and fighting season has begun again in Afghanistan. A combined infantry platoon, with GIs dispersed throughout a line of Afghans soldiers in loose formation, treks cautiously into a valley. The patrol must follow a foot trail to reach a small village, the terminus of their march, just two clicks away.

With the point men forward, the main body moves ahead quietly. Just as flankers move downhill to join the unit, gunfire erupts, sweeping the path. Two Afghans are hit immediately and sprawl in the track. Others scatter and hit the ground, desperately seeking cover. An American lieutenant races forward to organize return fire, miraculously evading bullets that stitch the path just behind him. The deadliest fire comes from two positions on either side of the patrol. More experienced GIs immediately recognize the chatter of PKMs, the Russian-made Kalashnikov man-portable machine guns used by insurgents around the world. 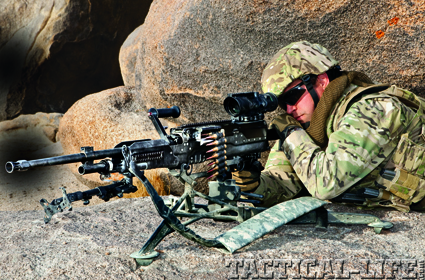 The troops, armed with M4 Carbines, quickly shoot back but with little effect. Suddenly, an American gun crew sets up their own machine gun and opens up with a deafening roar, louder and more intense than the PKMs. The GIs fire quick bursts that easily hammer the distant PKM emplacements. As quickly as the ambush began, it stops, with the last echoes of the U.S. machine gun fading like distant thunder. 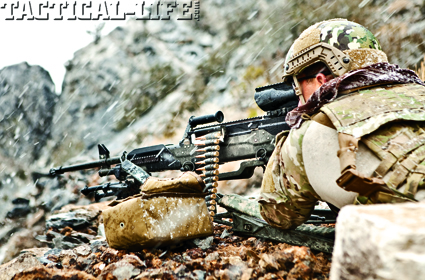