0
SHARES
5
VIEWS
Share on FacebookShare on Twitter
Serious reach! A solid M240 crew can lay down accurate fire out to 800 yards when shooting from the weapon’s bipod, and 1,800 yards from a tripod.

The U.S. military has called upon the M240B belt-fed medium machine gun for two decades to provide troop support with suppressive and direct fire. These weapons have put millions of rounds downrange, and littered the sand with hot empty brass, links and blood when called upon. The M204B is reliable, but troops in the field alerted their higher ups that improvements were needed. A request went out to “cut the fat” from a weapon that incorporates design features that date back to the end of WWI. Barrett Firearms, dependable provider of the M107 .50 semi-auto, took the initiative and designed the M240LW to take advantage of cutting-edge manufacturing techniques.

Battle Experience
Three soldiers comprise a normal M240B team, but many soldiers are trained on the weapon so they can man the gun if needed. One soldier with M240B experience is 24-year-old Aaron Fouraker.

Fouraker, a self-claimed shooting enthusiast from Russellville, Arkansas, was fascinated with firearms and shooting from an early age. After a year of college, Fouraker joined the military. “I joined the Army in May 2005,” Fouraker said, “and got assigned to Ft. Bragg and the 82nd Airborne Division in June 2006.” When he got to Bragg, Fouraker was assigned to Delta Company 154. 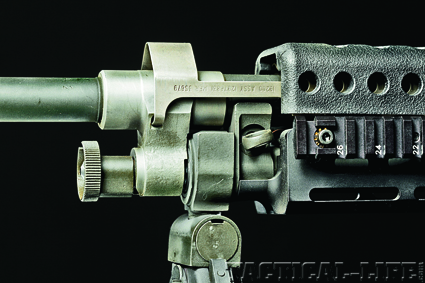 While training at Ft. Bragg, Fouraker experienced a parachute malfunction during a night jump on Drop Zone Sicily. After jumping from a C130, “I tore up both knees and pushed the cartilage to the sides,” Fouraker recalled. Although not directly responsible for his injury, Fouraker is familiar with some of the risks of jumping with an M240B machine gun.