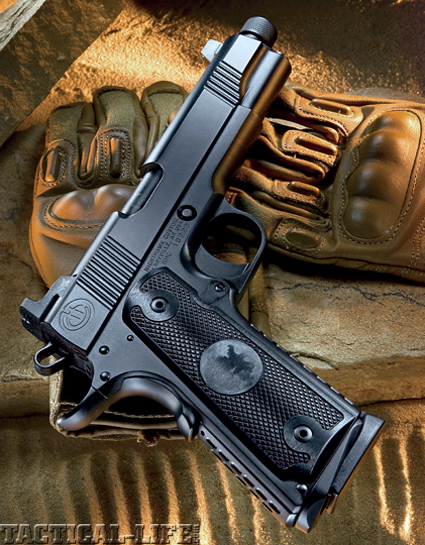 More than just a pretty gun, this collaboration between Nighthawk and AAC offers suppressor-ready firepower with performance that matches the looks.

When two industry leaders like Nighthawk Custom and Advanced Armament Corporation decide to collaborate on a project, the end results can only be described as unique. Both companies have earned a share of their respective markets, with AAC being one of the dominant forces in the suppressor market and Nighthawk Custom producing some of the best production/custom 1911s available. Last year, AAC approached Nighthawk with the idea of producing a suppressor-ready 1911 that incorporated the quality of Nighthawk with the personality of AAC. The project piqued my interest, and I called Mark Stone at Nighthawk, who was able to grab one off the production line for this article. 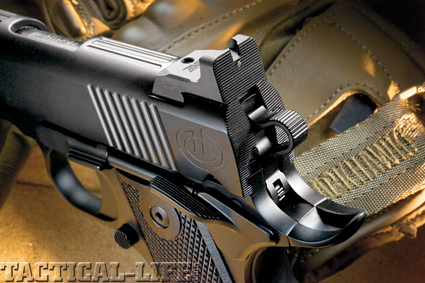 The Nighthawk AAC .45 offers a combination of features, both functional and cosmetic, that are reminiscent of high end, custom shop one-off guns.

Gun Details
The basic foundation of the AAC 1911 model is pure Nighthawk— a full size, 5-inch Government model that is built around the quality Nighthawk forged frame and slide. As is customary with all Nighthawk pistols, the frame and slide are precision-fitted and hand-lapped. The operating controls on the AAC Custom include an aluminum trigger with an adjustable overtravel stop, an extended magazine release, a single-sided extended safety, and well-fitted beavertail grip safety with a speed bump. The frontstrap and the beavertail have each been relieved to provide a higher and improved purchase on the pistol. The slide stop is designed with a pronounced ledge to improve manipulation when releasing a locked slide or manually locking the slide to the rear. Having run a Nighthawk GRP Recon while wearing gloves, I came to appreciate this minor but effective design change. 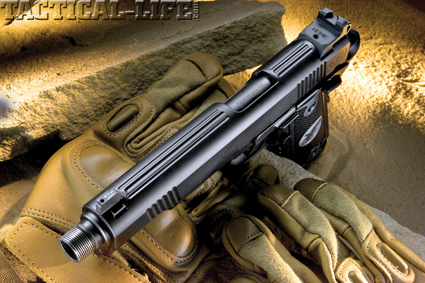 The serrations on the top of the slide and the pattern of the cocking serrations are taken from the M4-2000 suppressor. The clean lines and smooth edges are evident.

However, there is far more to the AAC model than the operating controls. The pistol is perfectly smooth without sharp edges, with the exception of the side blade. The edges of the flat mainspring housing are perfectly blended into the frame, as are the edges of the grip safety when it is depressed. Nighthawk selected to equip the AAC with ultra-thin AlumaGrips that feature the Nighthawk Custom logo. The thin grips reduce the overall girth, while the edges of the stocks are blended to meet the frame with no discernible ridge. The combination of a smooth carry bevel and stocks give the AAC a very slim feel and profile. The Nighthawk Custom logo is screened in the center of the stocks. The trigger pull measures a crisp 3.5 pounds.

The Advanced Armament influence comes into play in several areas. The front and rear cocking serrations, and the serrations on the top of the slide are the same pattern as found on the AAC M4-2000 suppressor. The frontstrap and mainspring housing feature a chain link pattern that is taken from the M4-2000. The most prominent features on the AAC pistol are the new Heinie Slant Pro Straight-Eight Suppressor night sights. The height of both the front and rear sight has been increased in order to provide a clear sight picture when a suppressor is mounted on the pistol. The Straight-Eight configuration consists of a tritium insert mounted in the rear sight that is centered below the aperture and a second inset that is mounted in the front sight blade. The two dots are stacked in an “8” to align the sights. Most shooters find this design faster to align than the more traditional 3-dot sights. Finally, the leading edge of the rear sight has been deeply relieved to provide a cocking surface should it be required.

My first impression of Nighthawk’s AAC model was very favorable. The combination of features, both functional and cosmetic, reminds me of some very high-end, custom shop one-off builds. The soft beveled edges, combined with the matte black finish, give the Nighthawk AAC a stealth-like appearance that almost absorbs light. Each feature is well thought out and executed. The fact that it is a production gun is very impressive.

Range Time
During the first outing, one shooter experienced a couple of premature slide locks. We were unable to determine if this was a user or pistol issue. However, this only happened with one shooter and the issue disappeared after about 100 rounds. In the next 150 rounds or so, the Nighthawk proved 100% reliable for all of the shooters. On the range, I really came to appreciate the enlarged sights. They were very quick to pick up for both the first shot and any subsequent shots. Surprisingly, the higher sights did not interfere with any of the 1911 holsters I routinely use. These included a Blade-Tech Kydex scabbard, a Milt Spark’s 55BN and Executive’s Companion EX IWB, and an Alessi Heinie DOJ. The more we shot the AAC 1911, the more we liked it.

The slim grips are a user preference that were liked by some shooters and disliked by others. I am not normally a fan of thin stocks. However, after a couple of range trips, the AlumaGrips started to grow on me. My only real complaint is that the checkering on the stocks has been flattened to the point where the stocks are almost slick. This did come into play when doing Bill Drills and rapid presentations. Other than one feature, I could not come up with a single item that would improve the AAC 1911.

Due to ATF restrictions, AAC was unable to provide a Ti-Rant for evaluation. However I was able to shoot the AAC 1911 extensively with using a Silencerco Osprey. The Osprey’s unique tombstone profile eliminated the need for the high Heinie sights. During several ranges trips, an estimated 250 rounds were put through the AAC 1911 with the .45 Osprey. The AAC 1911 never missed a beat.

Experience shows that the .45 ACP is a difficult cartridge to suppress to hearing safe levels. Significant strides have been made in suppressor design by Silencerco and AAC in the past year. The Silencerco 45 Osprey and AAC Ti-Rant are hearing safe with full power loads and each suppressor represents the best of both companies with the Nighthawk AAC Custom 1911 is the perfect host.

The price on the Nighthawk Custom AAC 1911 is $2,895, which is slightly more than Nighthawk’s GRP or GRP Recon. However, given the amount of truly custom features found on the AAC 1911, the price is very reasonable. I would like to see Nighthawk Custom bring out a railed version to allow the mounting of a white light.

For those looking for a .45 ACP suppressor host, you need not look any further than Nighthawk Custom. 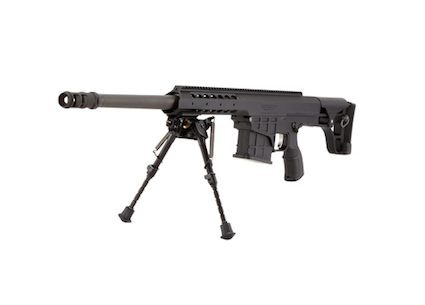 More than just a pretty gun, this collaboration between Nighthawk and AAC offers suppressor-ready…