2 of 8
Using Nighthawk’s AAC Recon 1911 On Travis Haley’s D5 Handgun Course
Throughout the range drills, Haley encouraged students to be aware of their body’s positioning relative to the target and how it impacted their shot groups.

3 of 8
Using Nighthawk’s AAC Recon 1911 On Travis Haley’s D5 Handgun Course
Under the Arizona sun, students of Travis Haley’s in-depth D5 Handgun course move, shoot and “feel” their way through drills designed to test both their shooting skills and understanding of their own learning processes. Haley wants his students to ask “why” at every possible point to understand why we shoot the way we do, and how we can prepare ourselves for any situation.

4 of 8
Using Nighthawk’s AAC Recon 1911 On Travis Haley’s D5 Handgun Course
Because of its intended use with a suppressor, the AAC Recon comes with tall Heinie Suppressor sights.

8 of 8
Using Nighthawk’s AAC Recon 1911 On Travis Haley’s D5 Handgun Course
Throughout the range drills, Haley encouraged students to be aware of their body’s positioning relative to the target and how it impacted their shot groups.

“It’s not always how it looks. It’s how it feels.”

Travis Haley, well known in the firearms training industry, continues to ask “why” at every possible point in the shooting skills development process. Haley has never been one to avoid questioning traditional dogma, or even his own past, when it comes to the rationale behind shooting techniques and training. The current manifestation of his journey in shooting is the D5 Handgun course, and it’s a journey with yourself as much as a fresh and challenging way to look at shooting.

Though the course would be a departure from the traditional, I chose to run the most traditional of fighting handguns, a 1911 chambered in .45 ACP from Nighthawk Custom called the AAC Recon.

I must admit up front to a Nighthawk Custom 1911 bias. I am not old enough to have trained with loose-tolerance, GI-issued 1911s in the Army. I am of the NATO-centric M9 generation. As such, my first experience with the 1911 came when my writing career put a Ferrari in my hand in the form of a Nighthawk Custom Predator. That pistol remains in my safe and has permanently skewed my expectations of 1911s. Well worn and intimately familiar, it has run over 20,000 rounds without a repair and continues to group tightly with the original barrel. I have replaced the recoil spring only twice, the first time only when a friend advised after cycling the action, “Hey, Len, you know you should replace the spring when the action gets this soft.” I hadn’t considered doing so because, barring the occasional magazine issue, it never malfunctioned. The feel is “glass on glass,” as they like to say at Nighthawk Custom. How about glass on air? A properly fit 1911 will run more smoothly with age, and mine does. Consider that factor when assessing the price. Nighthawks aren’t cheap, but would a pistol at half the price last this long, or would I be well into the costs of new barrels and gunsmithing bills to replace lugs, extractors and ejectors after 20,000 rounds? I suspect the latter. So, in fairness to the reader, I approached Nighthawk Custom’s AAC Recon 1911 with high expectations.

The AAC Recon is just about as elegant as a working 1911 can get. While not a scrolled and gilded art piece, the AAC Recon is a functional refinement of the 1911. Designed to be as slim as possible while still remaining a full-framed 1911, the AAC Recon has an overall smoothness that reflects the approach of its designers. The frame and slide are both forged steel, while the grip panels are machined from aluminum with the Nighthawk Custom logo of a raptor over the moon. It may sound gaudy, but it is actually quite subtle. The entire pistol is dehorned, and there are no 90-degree angles to be found. The front and rear cocking serrations, as well as those on top of the slide, frontstrap and mainspring housing, are ball-mill cuts that provide both a unique look and purchase without sharp edges. The slide stop is cut flush with the chamfered frame, and both the trigger and barrel share the blacked-out nitride finish with the rest of the pistol.

As the name implies, this model was built in collaboration with Advanced Armament Corporation, and the AAC logo can be found on both sides at the rear of the slide. The match-grade, stainless steel barrel is threaded with the Ti-RANT .45 ACP suppressor in mind. The 11.5-ounce, 8.74-inch Ti-RANT boasts a 133-decibel dry signature and 125-decibel wet sound signature, making it both lightweight and quiet. The AAC Recon also features Heinie Ledge Straight-Eight Suppressor sights with tritium inserts.

So how does the AAC Recon feel in hand? Like a pure Nighthawk—tight and crisp. For the Haley course, I did make one modification. While the machined Aluma-Grips do make for a thin profile, I opted to switch them out for Hilton Yam’s 10-8 Performance grip panels. For a course where feel and repetition would be the norm, I wanted a larger, rounder grip with the thumb relief to manipulate the slide and mag release. And no, I didn’t run the suppressor for a three-day shooting course, but it’s an interesting idea.

“The term ‘tactical’ has become overused in our industry. I am partially responsible for that.” Unlike many other instructors, Travis Haley isn’t married to one school of shooting or too vain to question himself or others and evolve his methods. For students accustomed to a class where students stand on a flat range and execute by rote what the instructor dictates, this was a surprise. Haley started not on the range, but in the classroom. Haley’s material felt more like an exercise neurophysiology lecture than a firearms course. But the room was full of experienced shooters, and after a few confused moments, students slowly realized this wasn’t going to be what they expected. Haley had the group of military, law enforcement and civilian students locked in on breaking down the assumptions they had brought to the class.

Haley began by exploring the ways the mind and body interpret information and the differences between cognitive (what), affect (emotional interpretation) and conative (why) stimuli. Haley would ask each student to focus on their approach to problem solving and how they get to their “why.” From their reactions, most of the students had never considered this approach. But understanding how the mind works when it comes to learning a physical skill, and interpreting the way a person learns, is critical to digging into the small elements that make up the larger habits. For example, Haley challenges students to examine whether it is their nature to instinctively gather facts and simplify the concepts, impulsively dive in and work through the questions with actions, or some combination thereof. In doing so, each student began to break down their shooting issues and work through solutions with this newfound awareness of their individual learning process.

Haley also dove into great detail about the physiology of shooting and the concept of proprioception, or the awareness of the body in space. Not outer space, but more like a basketball player’s understanding of relative position of the ball in his hand, his body to the floor, and his speed and direction. Proprioception is critical to both the basic position of the body and pistol while shooting as well as the ability to efficiently and quickly adjust to targets and threats. Multiple factors combine to create the sensitivity that is the “feel” of the relationship between the eyes, fingers, stance and grip. Primary among these is the eyes and the way they interpret targets and the effect that stimuli has on the body. According to Haley, “Target accommodation is not a simple process. The way the eye changes optical power to adjust to and keep a target in focus has many factors. The size of the target, the range to the target, the amount of ambient light, and the general health and age of the shooter’s eyes all contribute to his or her ability to acquire a target and create a clear sight picture.” Add to this the impact of stress on the body and one wonders how the bullets even hit their intended targets in the first place.

Haley started out with a large block of classroom information and methodically began weaving in longer and longer periods of implementation on the range. At first, most of the students were mentally saturated, myself included, and felt hyper-aware of even the most minor change in feedback to the hands, eyes and body. As with any complex movement, when you focus on one element, you tend to forget the others. But Travis Haley broke down each of his concepts into simple drills that put the concepts, particularly regarding the eyes, hands and body, into their proper context.

Each of us had our “neuroplasticity” (the ability of the brain to adapt and change) challenged. For example, several of the shooting drills emphasized the impact of rhythm and pace on consistent shooting. The rhythm gave the body something to track, and the eyes could adjust in a consistent pattern. Quickly, groups tightened and accuracy improved. Is there a rhythm in a high-stress, life-threatening combat situation? Likely not, but the point of the exercise is to develop awareness and control over the body in training situations so that conditioning takes over when the rational mind is narrowing into a focused cone on the threat at hand.

Ultimately, Haley’s D5 course is a tactile and psychologically deep dive into every element of pistol shooting fundamentals. Because each person’s brain and body function differently, the path to unconscious mastery is different. Some students have better body awareness, others have better eyes and a sense for distance and angles, while still others have equal amounts of both but have to learn “how” they learn so they can improve and maintain their skills. For me, the D5 course broke through several barriers of speed and accuracy by improving areas where I felt I had plateaued, such as target alignment and trigger control.

How did the Nighthawk Custom run? Like the well-oiled machine that it is. Over 1,200 rounds, I had no failures to feed, extract or fire. Some sight/target adjustment was required, particularly at close ranges to adjust to the taller suppressor sights—there were very slight height-over-bore adjustments to compensate for. And with any course where fellow students are running double-stack magazines, any single-stack 1911 will require more frequent reloads and trips to the range bag for ammo. For most 1911 enthusiasts, it’s a labor of love, however tedious. I ran a TUFF Gear, five-mag inline pouch on a High Speed Gear battle belt with a G-Code Holster. This required some minor modifications with a mill file to accommodate the taller sights, but doing so did not impair the integrity of the holster.

From the bench, the Nighthawk Custom AAC Recon grouped beautifully, with the best three of five-shot groups printing within an inch at 10 yards on four of the five ammo types I tested. The AAC Recon liked the Sig Sauer 200-grain ammo the best, but the other loads were consistent and close. With the AAC Ti-RANT suppressor, the point-of-impact shift was a mere 0.88 inches, with no change to the tightness of the shot groups. 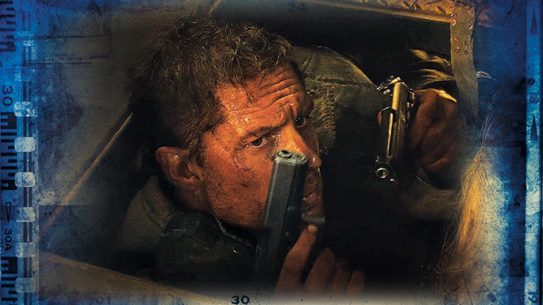