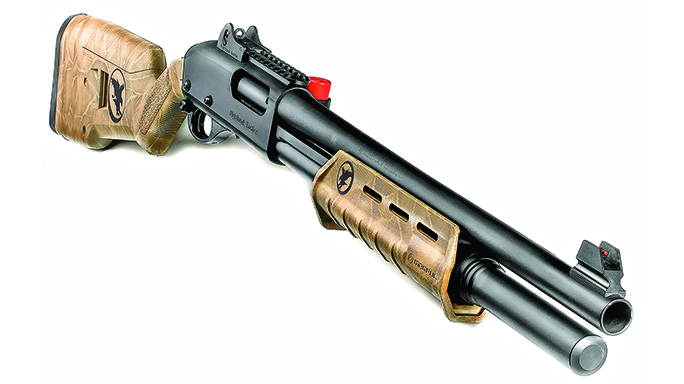 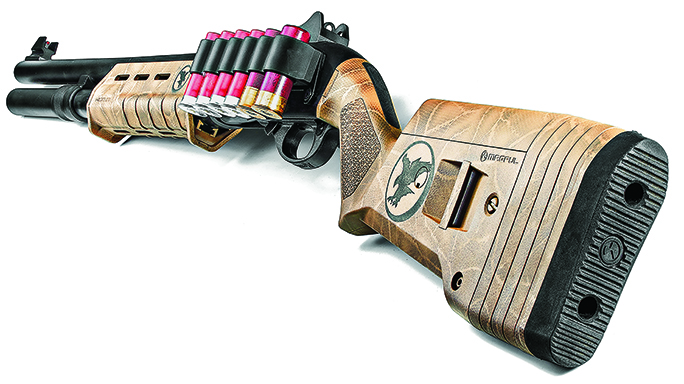 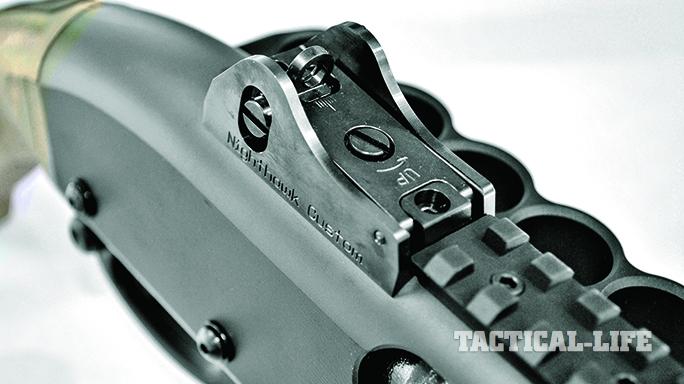 3 of 6
Nighthawk Overseer Model 3
The ghost-ring rear sight, with its wide aperature, can be adjusted for windage and elevation. 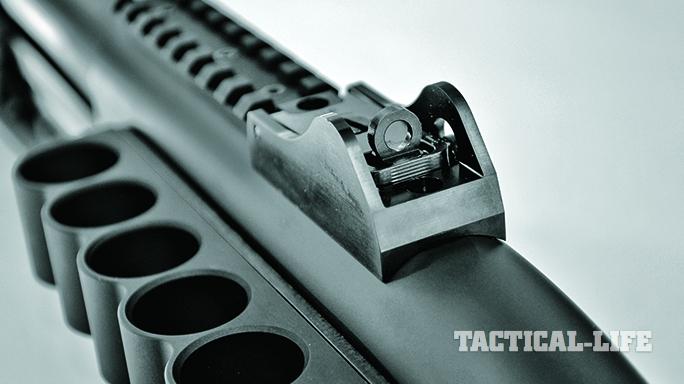 4 of 6
Nighthawk Overseer Model 3
Extra-thick “ears” protect the front and rear sights from possible damage during a deployment. 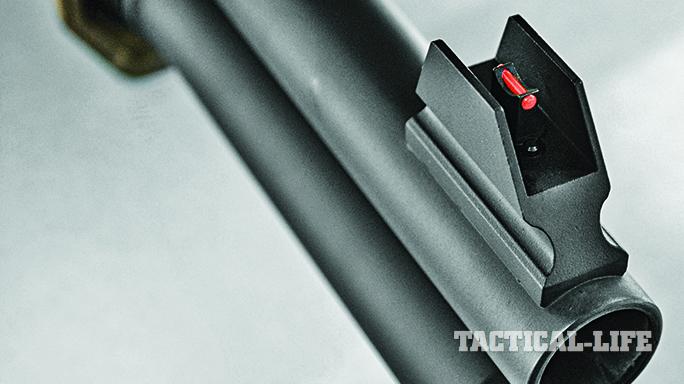 5 of 6
Nighthawk Overseer Model 3
The heavy-duty front sight post houses a bright red fiber-optic insert that is extremely easy to pick up under pressure. 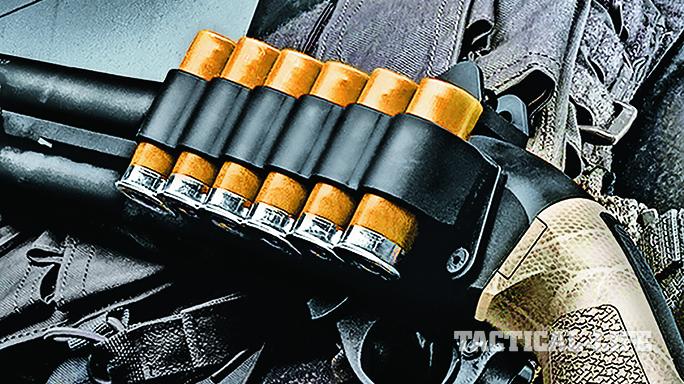 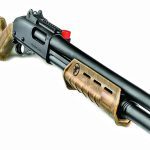 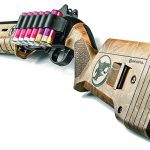 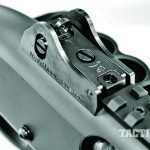 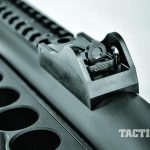 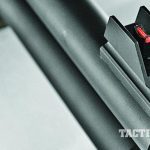 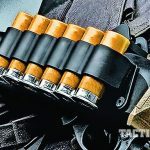 Ever since the 19th century, one of the most practical—and respected—weapons used by American police officers, soldiers and armed civilians has been the short-barreled shotgun. Lightweight, handy, easy to maneuver in close quarters and brutally effective at close range, it proved the perfect weapon for defending a homestead against marauding Indians, guarding a stage coach’s strongbox, calming a saloon full of drunken cowboys or facing down a band of bank robbers.

In the military, these shotguns first made a name for themselves during the Civil War as the preferred weapons of the hard-riding, grey-clad Confederate cavalry. In the early 20th century, short-barreled shotguns were the most capable of stopping fanatical Moro juramentados in the Philippines, and in the trenches of the Western Front, they proved so effective at stopping attacks by elite German Sturmtruppen that the Kaiser’s government threatened to execute any Doughboy captured with one.

During World War II, the USMC in the Pacific showed that pump actions were effective at jungle warfare and for stopping Japanese suicide charges. In the jungles of Vietnam, a rolling volley of 00 buckshot often broke up a Viet Cong ambush, while in Iraq and Afghanistan these shotguns have shown themselves to be equally effective at urban warfare and as breaching weapons for blowing open doors in buildings.

Today, pump-action and semi-auto shotguns are standard equipment for American police forces, and the gaping muzzle of a 12-gauge shotgun is just as effective at altering the anti-social tendencies of a group of urban gangbangers as it was a band of stagecoach robbers. As an NYPD officer once told me, “When viewed from the ‘wrong’ end, the muzzle of a riot gun looks as big as the entrance of the Lincoln Tunnel!”

Since the early 20th century, the traditional police “riot gun” has consisted of a 12-gauge pump-action or semi-auto shotgun with an 18- or 20-inch, cylinder-bore barrel, as exemplified by the Winchester Model 1897 and Remington Model 11. They provided patrol officers with more firepower and lethality than their .38-caliber service revolvers, especially against multiple opponents, while the deterrent value of the gun’s gaping .75-caliber muzzle cannot be underestimated.

While semi-auto police shotguns have been moderately popular, pump actions have always dominated the police/tactical market. This popularity is largely based upon two characteristics—simplicity and reliability. Their functioning does not depend upon spring tension, the amount of gas pressure or the recoil generated by ammunition. As long as you can work the forearm, a pump action will go bang when you pull the trigger. And most malfunctions can be cleared simply by pumping the action and pulling the trigger again, which is a lot simpler and faster than most semi-auto shotguns.

Nighthawk Custom of Berryville, Arkansas, is well known in the gun world for building some of the finest custom 1911-style pistols on the market today. The company’s staff includes some of the most noted master craftsmen in the industry, with many decades of combined experience. In fact, the company’s motto, “One Gun, One Gunsmith,” says it all. From beginning to end, your pistol will be completely built by the same gunsmith, who then engraves his initials into the frame, behind the left grip panel.

But Nighthawk does not limit its expertise to just 1911s and more recently has begun offering combat/tactical-style shotguns. These have been improved over the years, and the present Nighthawk Overseer series includes six models that share many features, but each is distinctive in its own way.

First, all six Nighthawk Overseer shotguns are built on Remington Model 870 actions. Introduced by Remington in 1951, the 870 has become one of the most popular pump-action shotguns in history. It features a bottom-loading, side ejecting receiver, a tubular magazine under the barrel, dual action bars, an internal hammer and a bolt that locks into an extension in the barrel. It has proven itself as being simple to use, rugged and reliable in the extreme. And the 870 isn’t just for duck hunting—Remington’s military and law enforcement 870s are currently used by the armed forces and police of over 25 countries.

But as with anything mechanical, one can make certain improvements or changes that make it more adaptable to specific chores. And that is what Nighthawk has done with its Overseer shotguns. Each shotgun starts as a Remington 870 shotgun that is completely disassembled and customized by a single Nighthawk gunsmith. The action and rails are hand-honed for smoother operation as well as reliable feeding and ejection, which is essential for fast follow-up shots.

Each shotgun is fitted with an 18-inch, cylinder-bore barrel and a red fiber-optic front sight that is protected by a rugged set of “ears.” Underneath the barrel you will find an extended magazine tube that increases the total capacity to 6+1 rounds of 12-gauge ammunition.

The receiver is fitted with a Nighthawk ghost-ring rear sight that is adjustable for windage and elevation. This speeds up target acquisitions for firing shotshells and makes it easy to shoot rifled slugs more precisely. A Picatinny rail is mounted in front of the ghost ring to mount an optic or reflex sight.

Like what you’re reading? Check out the rest of this article in ‘Guns & Weapons for Law Enforcement’ December/January 2017. For information on how to subscribe, please email [email protected]outdoorgroupmags.com or call 1-800-284-5668. 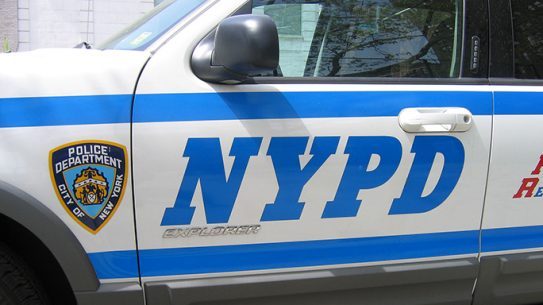 An NYPD official said shootings were down 12 percent overall from 2015, with around...