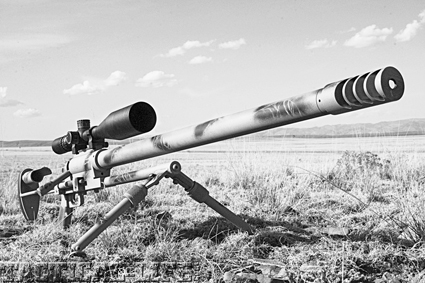 The Noreen ULR is a perfect example of form fol-lowing function. The func-tion is to deliver a bullet accurately to a distant target, and with one minor exception everything on the rifle is there to perform that job. In fact the ULR (Ultra Long Range) is the second-simplest rifle I’ve fired in over half a century of shooting, next to the J.S. Higgins .22 rimfire single-shot my father gave me on my 12th birthday.

Gun Details
The ULR is a bolt-action rifle stripped to its essentials. The action is a massive steel bolt inside a steel tube with no magazine or safety, just a trigger. Load a round into the chamber and the rifle is ready to go bang. There isn’t a bolt stop, extractor or ejector. To load the rifle, the bolt is opened and pulled back until it slides out of the action-tube. The rim of the cartridge is then inserted into a slot milled into the bolt face, resembling the shell-holder in a reloading press. The “assembled” cartridge-and-bolt is then slid into the action-tube and the rifle is ready to fire. 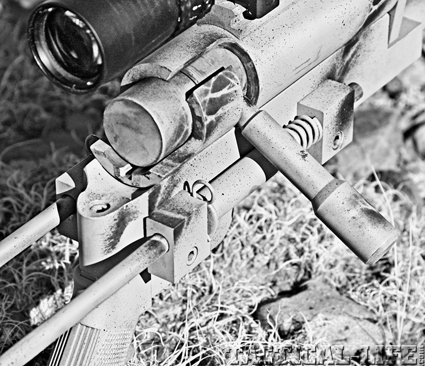 The bolt of the ULR is massive, yet simple.

The barrel is massive and over 32 inches long, not counting the big muzzle brake. A 0.88 of an inch diameter steel bar is underneath the barrel, providing a “forend” for mounting the sturdy built-on bipod. The buttstock is a recoil pad mounted on a pair of 0.38 of an inch steel rods — the lone concession to any other function than shooting — the pad’s rods slide inside a pair of holes alongside the action, so that the buttstock assembly can be collapsed. When the pad is extended (and fixed in place by a pair of cotter clips) the entire rifle is close to 5 feet long. 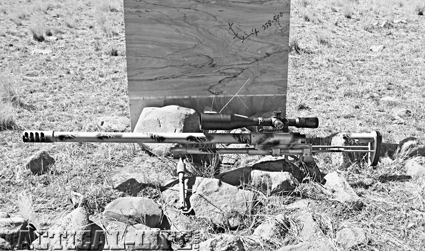 The first group at 500 yards measured a little under 1 minute-of-angle horizontally and ½ MOA vertically.

The rifle is available in four cham-berings: .338 Lapua, .408 CheyTac, .416 Barrett and .50 BMG. I tested a rifle in .338 Lapua, mostly because even though I was familiar with several other .338 rounds I’d never had a chance to fool with one. I was also very interested in the ULR’s potential as a long-range hunting rifle, and the .338 Lapua is becoming more popular for that purpose.

Though there’s a lot of great long-range factory ammunition on the market today, handloading allows a load to be devel-oped for a specific rifle, and with a supply of powder and bullets on hand, more shooting can be done. (More shooting, to many of us, is always a good thing.) A set of dies was ordered from Redding Re-loading Equipment, a company known for its top-quality loading tools. Some Norma brand .338 Lapua cases were also obtained from Black Hills Shooters Supply, the U.S. distributor for the outstanding Norma line of brass, bullets, powder and ammunition.

The top of the action, of course, has a Picatinny rail attached. The Noreen team of father Pete and son Phil had mounted a Nightforce NXS 5.5-22x scope on the test rifle, which saved me the task of mounting my own. Phil even sighted-in the rifle at 100 yards, the distance of the first range session. Several different powders were tried with the 300-grain Sierra MatchKing, a super-accurate long-range bullet with a ballistic coefficient of over .700. 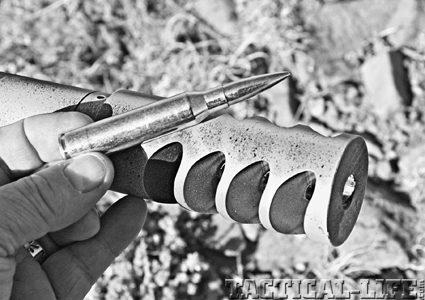 The big muzzle brake is highly effective, but you’d better have your hat locked down. 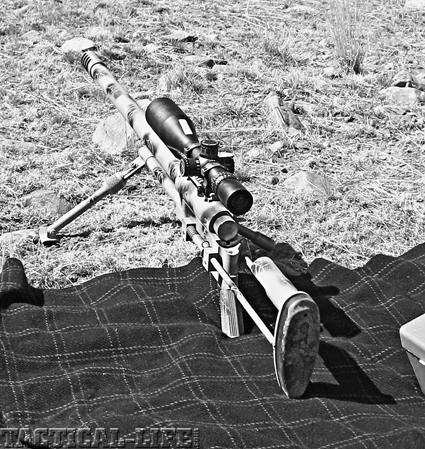 Rugged terrain is the sort of country the Noreen ULR was built for.

Shooting Impressions
The rifle was set up on its bipod on a concrete benchrest with a terrycloth towel under the steel feet of the bipod as a cushion. The big muzzle brake and the total rifle-and-scope weight of 38 pounds proved very effective at taming the recoil of the “little” .338 Lapua cartridge. The rifle’s kick seemed to me about like that of a standard deer rifle chambered for the .243 Win.

The only real difference felt came from the brake and its rear-angled ports, which created a minor windstorm. I was wearing a baseball cap to shade my eyes, and luckily it was locked on tightly. I also took the precaution of double-protecting my ears with both muffs and custom plugs. 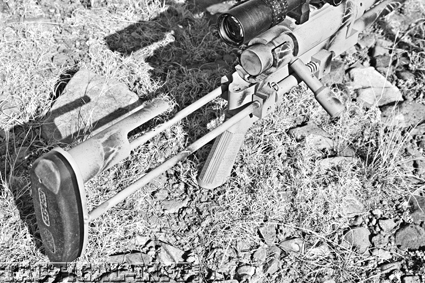 The buttstock assembly slides on 3/8” steel rods that collapses so the rifle will fit into most standard gun cases.

The Timney trigger broke very cleanly, and Phil Noreen had done an excellent job of sighting-in. The first group tore the middle out of a 1-inch bullseye, five shots spanning under 0.75 of an inch. In fact every load tried exhibited basically the same accuracy, and the only real difference was in the chronograph num-bers. The winning powder combination turned out to be 90 grains of Hodgdon Retumbo. This chronographed just about 2,900 feet per second (fps), and the shot-to-shot spread was only 20 fps, important when shooting at long range. 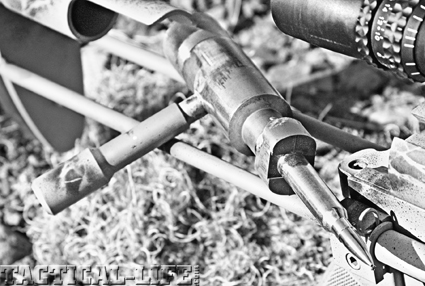 The cartridge is held in a slot milled into the bolt face, much like the case-holder in a reloading press.

Long-Range Shooting
Back in the loading room I put together 50 rounds of the 300-grain Sierra/Retumbo load for some long-range shooting. Then I booted up my computer and opened Sierra’s V6 version of their ballistics software program, downloading the information for the 300-grain load out to 1,000 yards, then converting the trajectory information into how many ¼-minute clicks were needed on the Nightforce’s elevation knob.

The only thing to do then was wait for a relatively calm day. It isn’t fair to range-test a long-range rifle on a windy day, because then all you’re really testing is the ability of the shooter, not the potential of the rifle. Unfortunately, it was April, the windiest month of the year in Montana, and I had to wait two weeks before finally one afternoon turned out to be reasonably calm.

Even then it wasn’t dead calm, but one good thing about Montana is there’s a lot of open country, so I was able to
set up the 5-foot-tall target with a light, slightly fishtailing wind just about directly behind me, where it would do the least harm. The target was first set up at 500 yards, to see how well the computer-generated predictions and reality matched up before shooting at longer ranges.

The shooting was done from prone, using the built-in bipod, just the way it would be done in the field. Five shots were fired with the only concession to the wind an attempt to touch off each shot when the breeze seemed to be directly behind me, but with a time-of-flight of over half a second the wind still got in its licks. 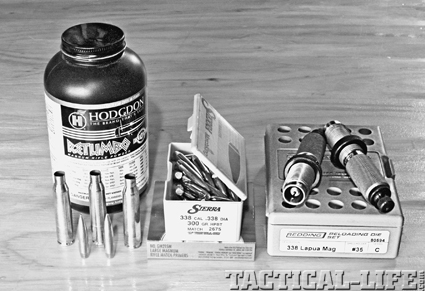 The group wasn’t bad, though, measuring 4.87 inches wide and only 2.44 inches high, indicating that the muzzle velocity of the load was indeed very consistent. The point-of-impact was a little lower than predicted, however. This was probably not the fault of Sierra’s program but some minor difference in measurement in my part, perhaps of the precise point-of-impact at 100 yards. This is the reason we always need to actually shoot any rifle/load combination at longer ranges rather than just assume that a computer will predict the precise point of impact.

After clicking-in a “reality adjustment” the next group was shot at 800 yards. I’d hoped to shoot at a full 1,000 yards, but it was a warm afternoon and airwaves from the heated ground made it impossible to aim at the target with any sort of precision beyond 800 yards. Fortunately, the breeze had almost died entirely. This time I fired three shots, and they landed right where they should have, the group spanning 3.28 inches from center-to-center of the widest shots, under ½-MOA. A couple more groups confirmed that the ULR is repeatedly capable of such accuracy even at almost half a mile, though the first group was the smallest. 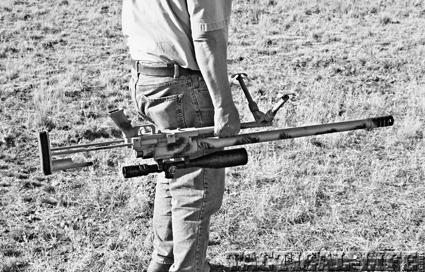 Final Notes
The first Noreen ULR grew out of a desire that Pete and Phil always had for a .50 BMG rifle. They decided to build one during their spare time be-tween other projects, and it turned out so well that by the time their first .50 BMG was put together and test-fired, they had orders for ten more. That was about three years ago, and since then they’ve barely been able to keep up with demand, partly because the ULR’s sim-plicity allows it to be a relative bargain.

Pete and Phil guess that they sell at least ten of the .50 BMG’s for every one rifle they sell in the smaller chamberings, partly because mil-surplus .50 BMG ammo is relatively cheap. Building a lot of .50 BMG’s helps keep the price down to $1,999 for ULR’s in that chambering; otherwise the price is $2,399. A quick internet check showed other brands of .50 BMG’s selling for anything from $2,300 to around $10,000.

ULR buyers are a mixed bunch with most simply being interested in long-range shooting. Quite a few hunters buy ULR’s, and tend to be more interested in the smaller rounds. The .338 Lapua is probably the most practical of these, since it is plenty of cartridge even for elk at 1,000 yards or more. A great many hunters use the 300-grain Sierra MatchKing for hunting, even though the folks at Sierra don’t recommend it. According to my computer, at 8,000 feet above sea level in typical elk-hunting weather, a 300-grain MatchKing from the load I developed is still going a little over 2,000 fps at 1,000 yards with almost 2,800 foot-pounds of energy.

Even if you prefer bullets specifically designed for hunting, there are plenty of accurate .338 bullets designed for long- range shooting, and more appear every year. Among the top choices would be Nosler’s 250-grain AccuBond and the brand-new 285-grain Barnes Tipped Triple-Shock X-Bullet. Both the AccuBond and TSX have excellent reputations for accuracy, and even though they’re a little lighter and not quite as ballistically efficient as a 300-grain Sierra MatchKing, they still retain plenty of oomph way out there.

Of course at 38 pounds, a ULR is not exactly a “mountain rifle.” Just carrying it the 100 feet or so from my shop to the pickup is something of a chore. But long-range hunting is often done from a horse, ATV or pickup, and is usually a glassing game. You sit and look for animals across canyons or way out there on sagebrush flat or at the other end of a huge farm field, and for that sort of shooting a ULR in .338 Lapua would excel.

The Noreen Ultra Long Range rifle is practical, simple and very accurate, and is available with a number of options. For more information contact The Gun Room LLC at 406-586-7383 or visit onlylongrange.com. 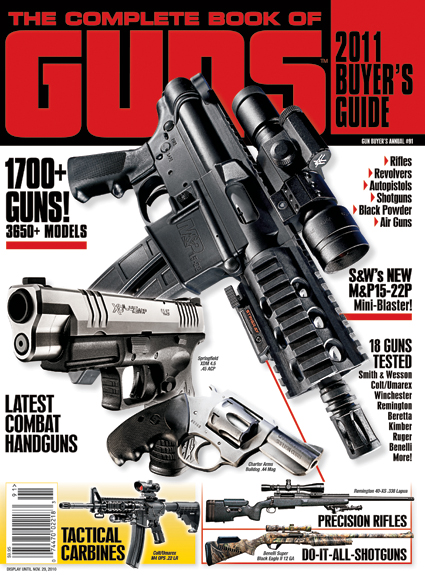 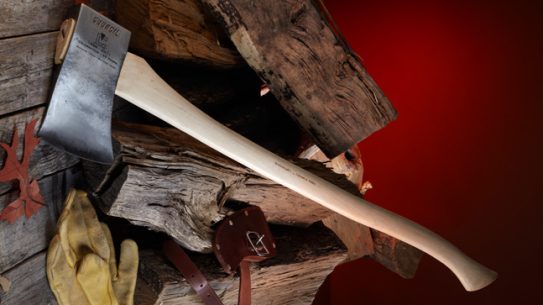 A model of simplicity, the Noreen ULR Rifle consists of just a few basic…