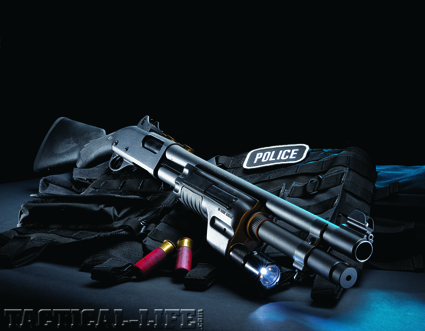 When it comes to firearms, particularly those in the law enforcement/tactical/self-defense realm, it is hard to not be at least somewhat familiar with the name Novak. Having earned a reputation for innovative and trendsetting products the hard way, through hard work, the Novak name is synonymous with quality.

Wayne Novak’s company toils away at producing sighting systems that seem to combine the best of all worlds—low profile dimensions that will not snag on or print through clothing while at the same time providing excellent sight pictures—in tough, sturdy packages. In addition to his sighting work, Wayne has also earned an enviable reputation for building high-end custom handguns that combine his decades of experience with the features that today’s customers want in a handgun.

While Novak is clearly most associated with handguns in the minds of many of today’s shooters, it is not his only area of interest. I must admit, even I was guilty of this oversight having only recently discovered myself (while doing some research on getting a stock 12 gauge Remington 870 Express 7-shot model customized) that he is just as passionate about combat shotguns. In fact, his custom shotgun work produces tactical-style defensive shotguns that are as well suited in a police cruiser or the hands of a SWAT team member.

One of the signature features of Novak’s shotgun work is the “Novak Custom Choke,” a variant of what is known as the classic “jug” choke. It is designed to help the shotexit the bore in such a way as to prevent fliers and get the shotgun to shoot to the same point of impact repeatedly.

Simply put, a jug choke is a process that can be performed on a shotgun with a fixed choke in which a small area of the bore, an inch or two back from the muzzle, is recessed. This creates an area where the shot will have a tendency to bunch up before being constricted again in the short section of tighter bore at the muzzle, resulting in theoretically tighter and more consistent patterns.

Wayne explained to me that the process they employ involves a lot of handwork. The entire barrel is initially honed, and the last 3 inches of the barrel is worked with another hone, then the shotgun is range tested. This process is repeated until the consistent results are achieved. Also the muzzle is crowned to further encourage the shot to leave the bore in a consistent manner from shot to shot.

“If you look down the bore of a barrel we have worked on, you will see the ‘jug’ located just back from the muzzle. It is only about 0.004 of an inch in depth, but it is visible,” Wayne told me. “Our choke system provides consistent results with both slugs and buckshot. In fact, we ask what your preferred loads are so we can tune it to them specifically.”

I wanted to see what Wayne could do for the slide-action 870 Express I had on hand. “You have a Remington 870? That is perfect. In fact, I work exclusively on them,” Wayne told me when I called him about moving ahead on this project. In addition to the Novak Custom Choke modification, Wayne suggested that I go ahead and have the entire Novak treatment applied to the shotgun. I agreed and asked him to modify the gun per his recommendations with any accessories he felt were suitable.

I shipped the gun off to him and waited as patiently as was possible for me. Eight agonizing weeks later, the shot-gun arrived back. Upon opening it, I was greeted by a highly customized combat shotgun, fully modified from the tip of the muzzle to the base of the buttpad.

Whereas my Standard 870 Express Synthetic 7-shot came from the factory with a simple bead front sight, Wayne had opted to have a set of LPA’s excellent Tactical Series ghost ring sights from Precision Sales International installed on the shotgun. Manufactured from steel, the sights are made up of a fully adjustable rear sight assembly with a replaceable ghost ring and heavy-duty protective wings. The front sight ramp is a heavy-duty winged unit on a barrel band with replaceable inserts. Sighting options include plain, white dot, fiber optic or tritium. Wayne opted to have mine fitted out with a tritium front post.

“The LPA sights have worked fine for us for years,” Wayne said. “I really like the front barrel band system. I do not like silver-brazed fronts on anything, as I have seen them fall off sometimes after years of shooting. It’s not if, it’s when.”

In addition to the tritium sighting system, Wayne explained that he felt the shotgun needed some sort of integrated lighting source, considering that most situations in which these types of arms are used are in low-light environments. What he selected was a SureFire unit. “They are simply the best,” he told me. Although the SureFire Dedicated Forend WeaponLight systems have been around for years, the 618LF unit he installed is one of the company’s newest offerings. Employing an LED bulb rather than a traditional incandescent unit, the new WeaponLight offers lower energy consumption combined with longer battery life, lower heat production and increased resistance to the damaging effects of recoil. Operation of the 618LF WeaponLight forend is straightforward and intuitive, featuring a pressure-sensitive activation pad for bursts of light and a constant on/off rocker switch. 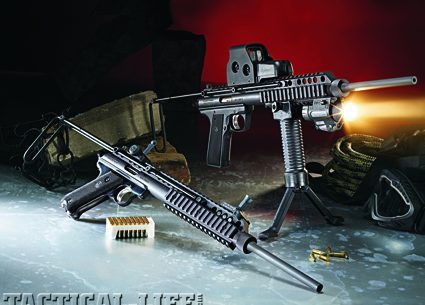 When it comes to firearms, particularly those in the law enforcement/tactical/self-defense realm, it is…