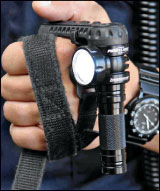 U.S.C.B. Purchases Liberator Tactical Light
The Office of the U.S. Border Patrol, announced expanded purchases of the Liberator GP Tactical Light made by First-Light. Training by First-Light USA is a component of the agreement. The training is designed to help agents maximize the hands-enabling capability of the Liberator system. First-Light indicates that its product offers a distinct advantage over a traditional flashlight, whether the officer is handling a canine, riding a quad, operating a firearm with their normal two-handed grip, or performing everyday administrative tasks. For more info, contact first-light-usa.com or call 877-454-4450.

ATK Scores Huge Army Contract for Small-Cal. Ammo
Alliant Techsystems, the largest supplier of small-caliber ammo to the U.S. military, has received $34 million in orders for the production of small-caliber ammunition at the Lake City Army Ammunition Plant in Independence, MO. The orders, issued by the U.S. Army Sustainment Command, Rock Island, Ill, include 7.62mm and .50-caliber cartridges. ATK operates the U.S. Army’s Lake City ammo plant where it produces a mix of 5.56mm, 7.62mm, .50-caliber and 20mm cartridges. For info contact atk.com.

FBI Awards Winchester $54 Mil .40 S&W Ammo Contract
FBI has awarded Winchester Ammunition the single largest ammo contract in the history of federal LE worth a maximum of $54 million. This contract includes the manufacture of .40 S&W service, training, reduced-lead training and frangible ammunition for the FBI for one base year, with four one-year renewal options. Winchester’s enhanced .40 S&W service ammunition is a 180-grain, bonded jacketed hollow-point round. The FBI tests the terminal ballistics of each round by shooting a specific test protocol through various barriers such as heavy cloth, wallboard, plywood, steel and auto glass into ballistic gelatin. The history changing federal contract affects many agencies both inside and outside the Department of Justice, including DEA, BATFE and U.S. Marshal Service. For more info, visit winchester.com.