0
SHARES
0
VIEWS
Share on FacebookShare on Twitter
U.S. Army Awards General Dynamics $39 Million for Abrams
The U.S. Army has awarded General Dynamics Land Systems a multiyear contract to upgrade 435 M1A1 Abrams main battle tanks. The vehicles will be converted to the M1A2 SEP (Systems Enhancement Package) V2 ( Version Two) configuration. The first increment of the multi-year contract is valued at $39 million and will fund the upgrade of 20 M1A1 Abrams tanks. This contract will complete the modernization of all remaining M1A1 tanks, which have been in the Army’s inventory for more than 20 years. The M1A2 SEP V2 includes improved displays, sights, auxiliary power and a tank-infantry phone. It also can accommodate future technology improvements to ensure compatibility with future combat systems. More information is available at www.gdls.com. 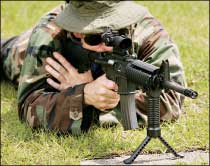 Troops Will Be Getting a Grip Pod for their M4 and M16
Grip Pod Systems, Jacksonville, FL, was awarded an $8,488,927 firm-fixed price contract for the purchase of 86,182 forward grip bipods that attach to both the M16 and M4 series of weapons. The Grip Pod is a vertical foregrip that features a spring-loaded bipod that deploys by pushing a button. It mounts to the M16/M4 handguard by means of a Picatinney rail system that is either attached to the existing stock handguards or replaces them. Production of the Grip Pod will be performed in Grip Pod Systems’ Jacksonville, FL plant. Four bids were solicited and on August 3, 2007, four orders were received/won. For additional information, contact Grip Pod Systems, 800-471-3144 or grippod.com. 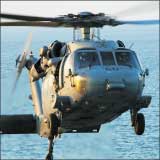 MH-60 Sierras To Be Fitted with Ballistic Floor Armor
The Protective Group Inc. (doing business as Protective Materials Co.) is being awarded an $8,261,127 firm-fixed-price, indefinite-delivery/indefinite-quantity contract for ballistic protection floor armor for MH-60 Sierra helicopters. These items are to be used by the United States Navy to provide small-arms fire protection to the crew and passengers of the armed helicopter. Work will be performed in Hialeah, FL, and is expected to be completed by 2013. This contract was not competitively procured. For additional information, contact Protective Group Inc../Protective Materials ble at www.protectmat.com.