by Tactical Weapons
in Guns, Handguns
0

0
SHARES
0
VIEWS
Share on FacebookShare on Twitter
BERETTA RE-ENLISTS FOR DUTY
Beretta USA has received a $220 million contract from the U.S. Army to provide 450,000 Model 92FS (M9) for service throughout the world. Beretta has already successfully deployed the first shipment of 20,000 pistols to be used by Iraq’s new military.

“We are honored to see the quality and performance of the Beretta Model 92FS pistol continue to be acknowledged in this dramatic way,” says Cav. Ugo Gussalli Beretta, President of Beretta USA. “It is clear that the Beretta 9mm pistol still sets the standard for military users throughout the world,” he adds.

Enlisted in 1985, the Beretta 92FS (M9) has been the standard sidearm for the U.S. Armed Forces. Since then, Beretta has provided to troops on a continuous basis. Three years ago, Beretta was contracted to replenish armories with additional 9mm pistols and the associated spare parts. This newest contract will send Berettas to foreign military customers of the U.S. For more information, visit www.beretta92.com.

U.S. ARMY GETS THE SIGNAL
Rohde & Schwarz announced a contract from the U. S. Army Aviation & Missile Command at Redstone Arsenal, AL, for the supply of 4,000 R&S SMB100M high-performance RF signal generators. The contract includes service and support covering a seven-year period. The instruments will be used by many U. S. Army facilities throughout the world.

The procurement is part of the Army’s TEMOD (Test Equipment Modernization) program that is tasked with replacing obsolete general-purpose test equipment throughout the U.S. Army’s inventory with state-of-the-art, off-the-shelf products. The benefits of the TEMOD program are expected to be an improvement in the readiness of U.S. Army weapon systems, a reduction in the amount of equipment in the field, and lower operational and support costs.

The R&S SMB100M is based on the commercially available R&S SMB100A analog signal generator. The R&S SMB100A is well suited for aerospace and defense applications because it can be serviced in place by its owner. For more information, visit www.rohde-schwarz.com/us. 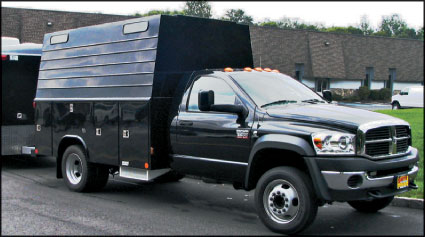 ODYSSEY DELIVERS FEDS UP-ARMORED DODGE
Odyssey has built a specialized vehicle for an unnamed Federal agency for mission support. Designed to overcome the challenges faced by higher elevations, the agency chose a Dodge 5500 with a Cummins Diesel and a 4×4 chassis. The package is outfitted with a custom utility body resembling a commercial vehicle for covert operations. The rear body of the truck is insulated and has separate air conditioning and heat with seating for 12 fully equipped tactical personnel. The vehicle’s bench seat lifts for storage and there are drop down locking doors on the sidewall shelves of the body for weapons and sensitive equipment storage. Odyssey has installed the latest LED emergency lighting from Whelen including covert behind-the-glass LED emergency lights, grille lights, front strobes, rear strobes and a siren with light controller. For more information, visit www.odysseyauto.com.