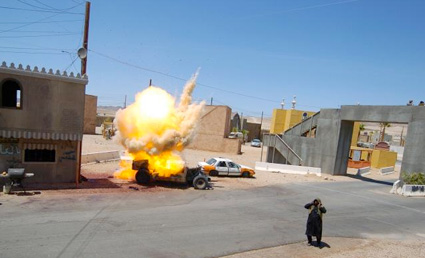 FORT IRWIN, Calif., — The battlefield of the future will be different compared to the battles being waged now in Iraq and Afghanistan; they will be different from the Cold War battles our nation’s leaders envisioned.

Soldiers from 11th Armored Cavalry Regiment participated in a validation exercise that will provide the National Training Center at Fort Irwin, Calif., with the hybrid warfare threat necessary to train future rotational units.

“It’s been several years since the regiment dusted off its mechanized combat power to attack a U.S. brigade combat team,” said the 2nd Lt. Jeffrey Metz, executive officer for C Troop, 1st Squadron, 11th ACR. “The regiment is now ready to answer the call to ensure the training units that visit the NTC are prepared for any threat on today’s battlefield.”

Future battles may not only be fought by large opposing armies, they may also include insurgency tactics. Hybrid warfare is a combination of conventional forces such as state supported military, irregular forces such as a militia, and terrorist or insurgent threats.

Out of various units in the Blackhorse Regiment a new opposition force was constructed dubbed the Mechanized Infantry Battalion. The MIBN is made up of A and C Troops from 1st Squadron.

The two troops are designed to replicate enemy armor and infantry assets. To provide the MIBN with air-defense capabilities, the unit is augmented by Soldiers from I Battery.

Further assets include heavy mortars from Headquarters Troop, engineers from the 58th Engineer Company, and Soldiers from the 511th Military Intelligence Company.

Prior to certification, the Soldiers of the MIBN conducted training for more than a month to hone their warfighting skills. The Soldiers received classroom instruction on potential hybrid threats. The MIBN conducted company and platoon-level maneuver training, tank and infantry fighting vehicle gunnery and practiced the integration of enablers.

The highlight of the training for some of the Soldiers, however, was the actual field training. “It was a great training experience and it was good to do maneuver training again,” said Spc. Orlando Ordonez, C Troop and a native of Norwalk, Calif. “Doing missions like this is the kind of thing that I joined the Army to do. I’m [leaving] soon, but doing force-on-force on a regular basis is the kind of thing that could make a Soldier want to stay here.”

The training conducted by the MIBN not only kept the Soldiers’ skills sharp, but it helped the new unit get ready for validation. The MIBN collectively maneuvered over 100 square-miles.

The MIBN participated in three force-on-force battles with the three MICs rotating between offensive and defensive roles. “I like doing force-on-force training like this,” said Spc. Nathanael Dorey, C Troop and a native of Miami, Okla. “It was the first time I had done it and I hope we’ll be doing more of it in the future. The maneuver training, even though we are using enemy tactics, will help me in the future when I go to other units because a lot of it crosses over to what we do.”

As the Blackhorse Regiment prepares another entry into military history, the Soldiers could not be more excited to take the training at the NTC to whole other level.

“Bottom line; the Soldiers flat-out love this mission,” said Capt. Christopher Kane, C Troop commander and a native of Edinboro, Pa. “It will be a great day for the Blackhorse when our hybrid warfare threat is introduced in training our Army.”

FORT IRWIN, Calif., -- The battlefield of the future will be different compared to…